Well, the next page of Surrealist Cowgirls is done. And scanned. But the scan didn't save, for some bizarre reason.
I reiterate: grr.
Since we're so close to the end of the story, and I have two more stories (and a recipe page!) plotted, I'll try to do a double header next week to make it up to my faithful readers.
Meanwhile, this is a related page. Some years back, I was working on an entry for Dark Horse's online comic competition, building a story out of one of the other characters in the Cowgirls world, Q. Gordyn Babcock, Freelance Shaman. The story later served as the core of one of my 24 hour projects.
But I was always happy with that first page. I chose the format based on being proportional to the dimensions given for the web page, and it worked out to be a very nice Sunday strip format. Despite my happiness with it, I never returned to the format or the story.
Here it is for your enjoyment. I don't know if I'll include it in the Cowgirls comic or not. It's a good page, but kind of a one-off. 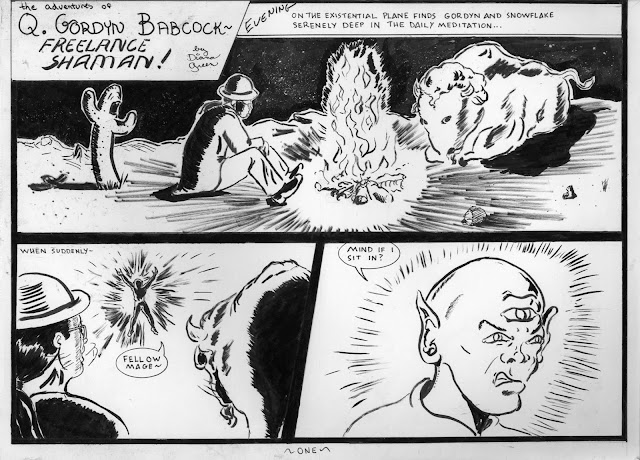 A couple days behind on these, due to illness. I will catch up today and tomorrow.
Some things I keep returning to, and have all my life: superheroes, film noir, 1940s motifs. I'm especially keen on the non-powered vigilante superhero. I've made no secret of my admiration for Doc Savage, the Shadow and the Rocketeer (my constantly back-burner superheroine The Kiss is in large part a response to the sexism in stories from those eras and genres).
I was tickled by Francesco Francavilla's The Black Beetle, from Dark Horse. 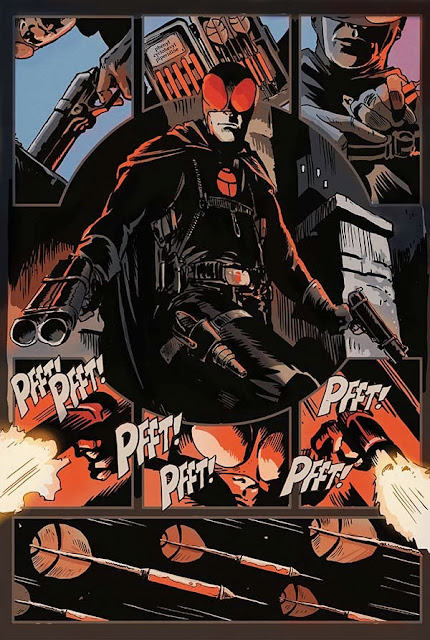 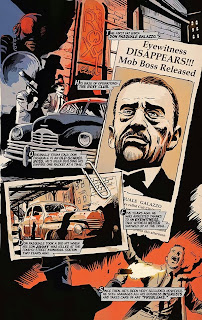 Tight, moody writing. Art that is both innovative and in service to the story, with layout elements at times echoing period pieces. An urgent yet detached hero with a backstory that's integral to the plot. Way cool weapons. And so much more!
While I wasn't paying a lot of attention, I've been admiring Francavilla's art for years, first in the neglected revolutionary war superhero/spy story The Black Coat, then on Matt Wagner's Zorro and a fill-in issue of Jason Asala's Scalped. His work has a confidence and an urgency that serve it well, and he seems most at home working on period material.
I'm pleasantly surprised that he writes as well as he draws. Though there are a reasonable number who do both well, it's still less common than excelling in one or the other.
Based on a napkin sketch from some years earlier, The Black Beetle was begun as a blog project in 2006, and picked up by Dark Horse for publication in Dark Horse Presents in 2009, followed by a 2013 minieseries. A handsome hardcover collected edition appeared in October 2013. With a new miniseries scheduled for early this year, we can eagerly anticipate yet another hardcover edition, and - dare we hope?- a beautiful Omnibus edition down the road!
This is the stuff of pulps, cliffhanger dramas full of lush color and over-the-top action, coupled with the story of a hunt for a great Maguffin, a scarab, and a delightful if underused villain, Labyrntino (great name!), the story engages on every level.
I mentioned the coloring. Francavilla does his own coloring, and he's every bit as subtle as the best. He controls his color schemes tightly, usually working in a very subdued range that makes the warm tones really pop, much as the Pander Brothers did on their early Grendel run.
I read this through our friends at the Public Library, as I did with many books this year. But I will be adding it to my personal library as soon as I'm able. Ideally that Ominbus edition will be out by then!
Next: Best of 2013, No. 12 returns from the distance...
on January 05, 2014 No comments: