How far have we come, if the most exciting books are about the oldest characters?
Dynamite's Lone Ranger series (and its offshoot mini, the Lone Ranger and Tonto, which had a very satisfying circus story for its last issue) have been full of sensitive, insightful writing by Brett Matthews, Joe Kubert-esque art by Sergio Cariello (a very nice guy I met  about 3 years back at San Diego- I'll post the Lone Ranger and Tonto sketch he did for me when I have scanner access again) and some of the best coloring I've seen in comics in a LONG time. 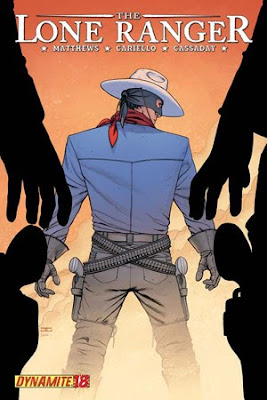 This story is the start of a new arc, and has the stuff in it I like about this comic, the thing that others seem to dislike. It's quiet. the characters have very real conversations about things, while things happen, before they happen, and afterward. The dialogue is sparse and heartfelt. The book takes its time making its points, which makes the ensuing mayhem all the more powerful, even if you do have to wait two or thee issues for it. To me, this is very pragmatic writing. In real life, things don't happen to people at a breakneck pace. With rare exceptions, something huge happens, you have some time to live and reflect on it, and something else happens. The accelerated cataclysms of the superhero world are rarities in human reality. And to see that reflected in contemporary narratives of a character created over 7 decades ago is quite refreshing.
And Tonto is an amazing character here. Centered, self-aware, skilled, and unwilling to suffer fools gladly, even the Lone Ranger himself, who is often a fool in this book- not in a mocking way,  but impetuous. In this storyline, the Lone Ranger is a driven young man whose impulsive nature befits his age. Strong character portrayals all around.
There are some elements of this book I'm not mad for. The romance involving the title character's brother's widow feels a bit forced, despite the new direction it was given in the issue following this one. And I'm so tired of multiple covers, which appear to be done for every issue of every Dynamite book (I couldn't say for sure, since I only read one or two other books of theirs- the Project Superpowers line leaves me cold).
But even with all that, this is a very strong book. I can easily see Matthews' Lone Ranger uttering one of my favorite Harlan Ellison quotes: "If you want consistency, look for it in the grave. I'm just a flawed, miserable human being, doing the best I can."
Tomorrow: #8 on the hit parade.
on January 02, 2010 No comments: