I come and go on Disney stuff. I love the animation and the storytelling is always well-crafted, but sometimes the unsubtle subtext is too creepy for words.
Now and then, however, they get it just right.
There's a number in the animated Hunchback of Notre Dame that sends chills through me. The self-righteously pious Judge Frollo is confessing his obsession with Esmeralda.

His torment and the imagery around sensuality and obsession just captivate me. I found that number to be the best part of that morally haphazard outing.
Spoilers abound from this point on. Read at your own risk.
This was on my mind as I arrived at Media Night for THAIS. Jules Massenet's 1894 interpretation of Louis Gallet's novel, Thais tells of a sensuous performer, the title heroine, and the Cenobite monk, Athanael, whose obsession with her leads him to attempt the salvation of her soul. Set in Egypt during Roman occupation, the work poses numerous challenges. Staging is complex, costuming is challenging, and most significantly, the title role has a reputation of being one of the most difficult to sing. The roles, especially said title role, are also physically demanding, to the point at which one is exhausted watching the work!
I'm pleased to report that Minnesota's own Kelly Kaduce more than rose to the occasion, in every sense. Her rendition of every theme was achingly beautiful and her physical approach to the role was spot on. I regret that the circumstances of sketching during a dress rehearsal (AKA Media Night) are not conducive to portraiture, so my hasty scrawl does not do her beauty justice. 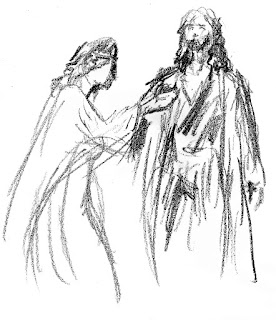 Lucas Meachem's turn as the obsessed Athaneal was equally moving and profound.  He bought a torment and love to every aspect of the story, from the initial obsession and violation of Cenobite isolation to reform Thais through his own ambivalence as he adopted secular splendor to encounter Thais in that world.
Athaneal's insistence on wearing his hair shirt beneath his camouflage of golden robes, courtesy of the impresario Nacias (also obsessed with the titular heroine), speaks volumes as to who he is and who he must be. The key to drama is the absolute and irrevocable change in values of a character. In that sense, both the principals are classic examples of good drama. Consistent with late 19th Century morality plays, one change arrives too late, as Athaneal learns the converted Thais is dying and resolves that he was wrong to change her soul at the cost of his life.
The morality of this work is clearly a challenge for a contemporary audience, as it seems to put piety and the will of a Deity ahead of a woman's self-determination. Perhaps this is a flawed or incomplete reading of the work's complex text. Athaneal truly believes he is putting Thais' best interests at heart as he fights aggressively for her conversion. But isn't conviction true of all zealots?
Once again, MN Opera is remarkable in its staging. Use of transparent/translucent curtains, an angled bed with an impassioned painting on it (!), and delicate use of rains of rose petals and silver shards serve to make the production visually lush. I'm struck by the innovative staging at every new work. Lorenzo Cutuli has earned accolades for this design and its execution. He won the International Opera Award for set design in 2014. If there's justice, he will win again for THAIS. MN Opera is blessed to have him on this production.
As Athaneal and Thais cross the desert to reach the nunnery that is to be her new home, the set is alarmingly sparse. There is only a shiny mound. It took me a minute to realize that the mound was a pile of broken mirrors.
I must write of the impassioned and beautiful dancing that dominates this production. As one of my colleagues from the Black Hat Collective remarked, it felt more like a ballet in spots. This is a compliment. The play within a play model provided wonderful opportunities to explore movement and music. This production took full advantage of them, to my delight. 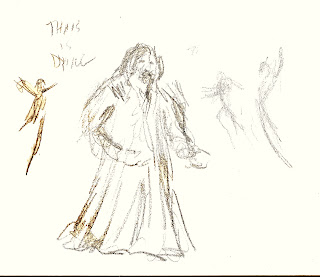 Usually, just to try to keep balance, I try to find some aspect of a production that was wanting. In MN Opera's current production of THAIS, there is none.  Every facet of the work is impassioned and professional.
Go. I cannot offer any stronger encouragement. This production is beyond language. It will fill and devastate you. THAIS runs 3 hours and 11 minutes, but I was so sorry when it ended.
It is at the MN Opera May 12- 20.
Next: back to the Graphic Memoir.