Posting a bit after midnight CST, so technically not Sunday any more, if you're counting.
But here we go anyway!
Only five more chapters to go of this run, then it's back to the Surrealist Cowgirls for a bit till that narrative finishes up. I've got  couple pages ahead on that already, and am eager to put that story to bed.
I'm rather pleased with this chapter and hope you are too. 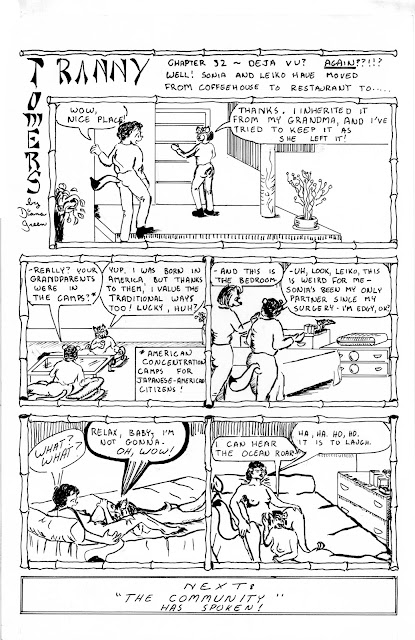 I like the Japonisme elements at play here. I was trying for a sense of being an Asian girl raised in America, conveying aspects of how the cultures integrate.
In the last panel, the word balloons were originally in the opposite order, which killed the joke. I switched the content in Photoshop, but I'm not 100% convinced it's working yet. There's a similar problem in the preceding panel.
I'm both fascinated and repelled by the Japanese internment camps. I thought having a descendant of such racist tragedy be both gay and self-accepting made for a very interesting character. Looking back at the strip, I wish I had done more with her, though she does show up in most of the remaining strips.
When Lavender originally printed this, they butchered it. They changed the orientation from portrait to landscape, chopped the last two tiers apart and staggered them in a really odd way, all without so much as a by-your-leave. I was less than happy and let them know it. Maybe it's just as well I don't have  tearsheet for that mess any more.
Working from a variety of references here. Not sure where I cobbled the masthead from, but that faux Japanese text is fairly common. Running the text both horizontal and vertical also reinforces the cross-cultural aspect of the character. The framing comes from a tiny bamboo picture stand that's currently supporting a photo of my maternal grandparents.
Next week: we meet Leiko's family, sort of.
on July 09, 2012 No comments: