Hi, all.
This is another one of those pages that took forever. When I find it, I'll come back and post the original version of this. It sat on my board 3/4 complete for more than a month, until I realized what I was doing wrong and moved to this version.

This turned out rather well, I think. A meditative page, a nice balance between text and image, between realism and symbolism, even if the symbolism is a bit on the nose (or closer to home than that, if you like).
Like this whole chapter, this is deeply intimate. As discussed in the past, some members of our community wrongly use surgical status as bragging rights. My intent here is just to tell it as it happened, as best I remember.
The narrative challenge is that some of the chapters overlap. When the book is done, a chapter will end, and the next chapter will begin at an earlier time, covering a different aspect of the story.
From a design standpoint, there were some challenges here, but they worked themselves out fairly easily, once I realized what the approach had to be. The big challenge was getting some weight into each panel. Each panel is a bit more sparse than its predecessor, as the extraneous is stripped away and she is (I am) left with the central question of her life - or so I thought at the time.
The lyric quoted is from a Monkees song, Sometime in the Morning. Not what Goffin and King had in mind, I suspect, yet somehow apropos.
The last panel is a reiteration of the original cover art, which may be the final cover art. I'm happy with it, but other ideas tease my mind....
Ahem.
The supply list.
Canson Recycled Bristol
Solid #4 lead
Lead holder with #4 fill
Magic Rub eraser
Yasutomo Sumi-E ink
Crowquill pen
Synthetic brushes, No. 0, 2 and 4
Tight Spot correction brush
Tech markers, Nos. 3, 5, 6, 7
Copic multi-liner brush, small and medium
And just a hint of Photoshop for cleanup.
Next: the surgery page.

Finding both time and focus to draw. As it is less than 10 pages, this story seems less emotionally daunting than the Curt story.
This is the title page. My influence on this one is the work of David Mack, especially his later covers for Kabuki and his work with Bendis on COVER. The way he frames things seems so effortless, until you try to do it!
But it does play into my fascination with silhouette as a visual and narrative device. 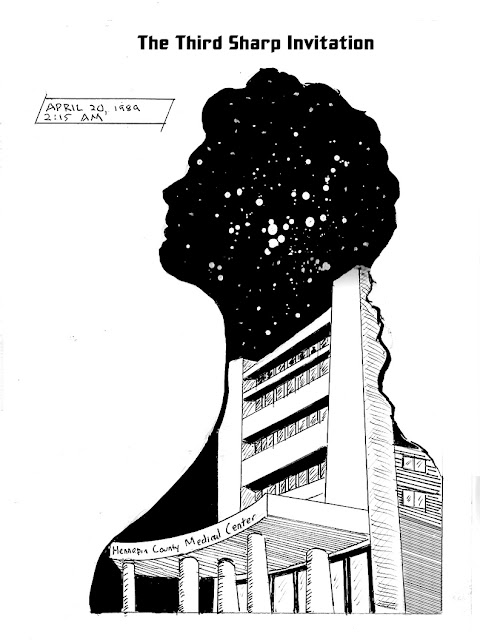 To refresh everyone's memory, since the story has been, ahem, prolonged a bit:
The Sharp Invitations are things in my life that both compelled me and caused me pain. The first sharp invitation was my cutting my thumb on the rotary mower when I was five. The second was my grade school attempt to hang myself. The third, this story, is my gender confirmation surgery.
Sex change. Gender change. Gender reassignment. Gender confirmation.
It's been called so many things over the years. Hey, it's girl surgery, at least for me.
I've been pondering the value of this work in these times. After all, we haven't been able to be social animals for a third of a year. The whole world is sick, And lately in Minneapolis, we're just happy that the city isn't on fire.
It makes comics seem, well, trivial.
But I finally accepted that, for good or for bad, this is what I have to say. To stop saying it would an act of dishonesty, especially now that I am finding my visual "voice" as a comic artist. To silence that voice would be a wrong. I won't be so grandiose as to say it would be a crime, but... it would be, or at least feel, wrong.
Technical issues: I took MANY liberties with the design of Hennepin County Medical Center. I just grabbed a reference photo and moved things around until the building was plausible and worked with my idea. And I do adore the classic black with stars motif!
Equipment/Tools:
Canson 2 ply Bristol
Lead holder, No. 4 lead
Magic Rub eraser
Yasutomo Sumi Ink
No. 2 and No. 4 synthetic brushes
Various straightedges, triangles and T-squares
tight Spot correction brush
FW Acrylic White
Next: The Third Invitation, Page 2.