Before we begin, one of my Windsor Newton Red Sable brushes died during completion of this page. We will now observe a moment of silence.
...
Ahem.
After a couple weeks of false starts (one due to exhaustion following completion of teaching my Graphic Memoir course, the other due to a mercifully brief but intense bout of immobilizing depression), we're back with the next page. It's been a long time since I've missed a week, and two in row really grates on me! I'm planning a trip for October, and will work ahead to be sure I don't miss a week!
This is the seventh page of story culled from the two lines of text on the rough draft page. When this chapter is done, I'll post the whole story with that draft page in relation to it, just to make the point of how much story was left out of the draft edition.
This poses a daunting aspect in the telling of the story. As Alan Moore said about Miracleman, the story is growing in the telling. That's good in the sense that it's a better story if fully told, provided it's judiciously edited. However, it's frustrating in terms of the time it's taking to tell the story. My self-imposed completion deadline of the end of November does not seem plausible right now, and I am eager to complete this. I have a couple other projects I'd like to get going on, and I am reluctant to undertake them before completing at least a more fleshed out (so to speak) edition of this one. Besides- hey, it's my magnum opus and all that.
When we left our heroine (me), she had just married Delia without knowing it. Now we jump back a couple months, still within the time frame of the chapter on Curt.
Read on: 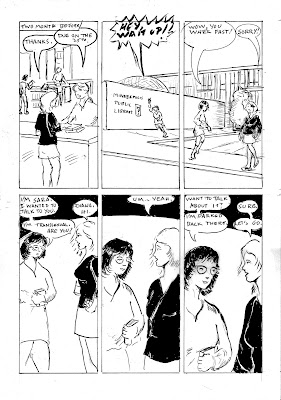 Story: unlike the woman that served as the basis for Delia, I AM still in contact with the real Sara. She remains a good and trusted friend, all these years later. I've changed her name and altered her appearance as she requested. If she wants to out herself as this character, she is of course free to do so. No pressure either way, my dear.
This is pretty much the way it happened. She ran after me out of the Library, outed herself and asked me to follow suit, then we started talking. Pretty gutsy, lady!
My outfit was easy. I was wearing the short denim skirt that was required at the time (as was she), and a black top that I still have!
Technical aspects:The challenging part of the backgrounds on this page was finding accurate reference for the OLD downtown Library, with that odd sculpture in front of it! I had to do the checkout station from memory, As with many libraries, checkout in the Hennepin County system is automated now, so no more checkout clerks!
My backgrounds remain a blend of loose and sketchy and technically accurate. For a while, when I was working on A Private Myth (another project yet to see completion in comic form, though the script is done), I had evolved a trick of penciling tight backgrounds, then inking them in free hand to keep the feel consistent with the art. That works on backgrounds, but not as well. In general, I'm being more aware of the background/environment as a story device. It's crucial, and I'm improving at using it effectively.
So many pages to rescan. This business of scanning in tiers and matching up the halves is tedious at best.
I really like the old trick of using continuous background with dynamic characters as a way of advancing time, used here in panels two and three. The second tier is tied together by the old Terry Moore trick of an arc of black as a weight/background element. Also, we move in from 3/4 shot to cowboy shot to medium close up. Once I got over my usual intial inhibitions about inking, I had real fun doing her hair and my top.
Materials used on this page:
Canson XL recycled 96 pound Bristol
Graphite holder with #2 and #4 leads
#0, #2 and #4 Synthetic and Sable Brushes
Crowquill nib and handle
Dr. Martin's High Carbon India Ink (this stuff is great!)
FW Acrylic White
Magic Rub eraser
And a plain old ballpoint pen for touch-ups!
Next: more Sara, as the Curt story continues