Again, back to a book of reprints.
But there's so much new work here, and the old work is reprinted with such skill, it all feels new.

A bit of background: 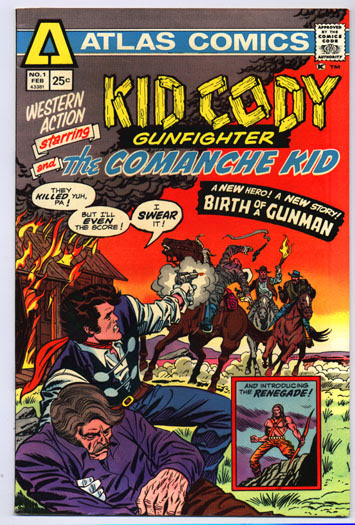 Doug Wildey was a real life cowboy and adventurer who just just happened to be one of the best damn comic artists to come down the pike. While he's drawn and written war comics, The Saint comic strip, Tarzan, Archie, romance, mystery and horror, he's best known for two things: creating Jonny Quest and doing spectacular Westerns.
Oh, he was also the inspiration for the character of Peavey in The Rocketeer. Creator Dave Stevens was a friend and a huge fan.
Some of his work, like his characters for the short-lived Atlas/Seaboard line in the early 1970s, Kid Cody and the Comanche Kid, had short runs with sad distribution- odd in this particular case, when you consider that the Atlas company was started and run by Stan Lee's brother Larry Leiber.
After Wildey's strip Ambler folded in 1974, he returned to work on his Western magnum opus, Rio.
The first of three published graphic novels (at the time called "continuing stories") appeared in Eclipse Magazine no. 1, August 1983. The sequel appeared in Eclipse Comics, the followup anthology. This story was later reprinted by Comico, another spectacular 80s comic company that died too soon. A third story was later printed by Dark Horse as two single comics.
Wildey worked on two more Rio stories that never saw print. Until now.
There are a total of five stories in this book, plus some brilliantly handled supplemental material. 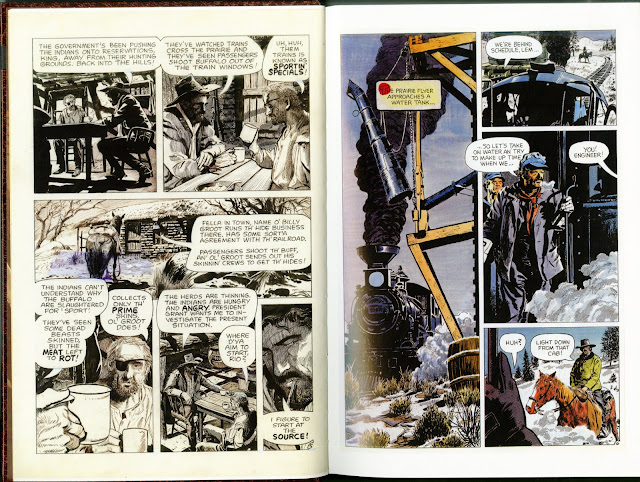 The new volume, a delight for those of us who love books (more on that below), is printed almost entirely from the original art. The colors are so much more vibrant than in the original printings. I suspect Wildey was working in color marker and watercolors over inks, based on the markmaking visible on some pages.
Rio is a mystery man, a reformed outlaw pardoned by President Grant, an ex-lawman, making his way in a matter-of-fact manner. He doesn't bemoan his fate. He just lives it.
The stories are classic Western stuff: buffalo hunts, railroads, mining, gambling, and a cast of supporting characters including incredibly fleshed out interpretations of Jesse James, Doc Holliday, and the Earp Brothers, who act like real jerks this time around.
Here's a choice bit of the Jesse James story. 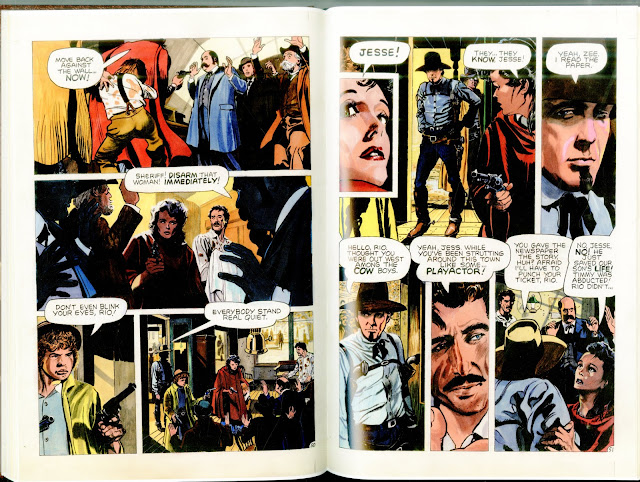 In this story, Wildey shows contempt for the hypocrisy of the "civilized" people in the West. After Jesse is exposed and forced to leave town, it is revealed that the late sheriff had a clandestine arrangement with Jess to protect the town in return for safe haven. After gunslingers and ne'er-do-wells invade the town, the righteous folk who drove Jesse out beg Rio to help them. Given their shabby treatment of both Jesse and him, Rio simply rides on.
Two of the tales in this book are incomplete, and are presented in their state at the time of Wildey's death in 1994. Below are samples from those stories. 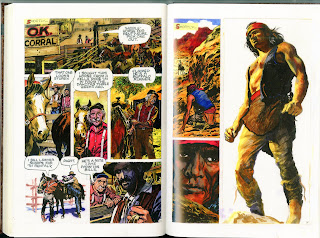 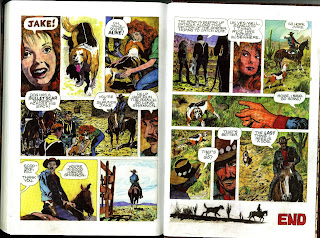 Even in this rough state, the quality of the art, writing and overall storytelling is readily apparent. I'm particularly charmed by the silhouette of the dog following Rio in the last page, the one that ends the stories in the book.
The book also contains some lovely portrait work of the title character. 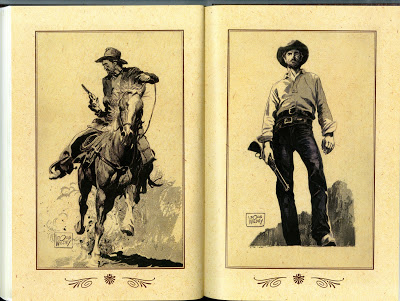 The design of the book itself deserves comment. One of the challenges of reprinting older material is getting it right, and this is an arena in which IDW shines. While their Artist's Edition series is out of my price range, I do drool every time one is announced or released. One of the local stores (sadly, one that never seems to have a sale) has a copy of the Simonson Thor volume, and I get to visit it longingly every time I stop in.
But the Rio volume is comparatively affordable, especially if you do as we cheap bitches do and combine discounts until it's 30% off. Still able to patronize local comic stores and save a buck at the same time- yeah!
Rio, the Complete Saga is very well designed. The border elements on the above plates are just the tip of the proverbial iceberg. The above front cover scan doesn't show it, but there are decorative elements on the cover that reinforce the tone of the book. See this more complete image of the back cover for an idea of what I mean. 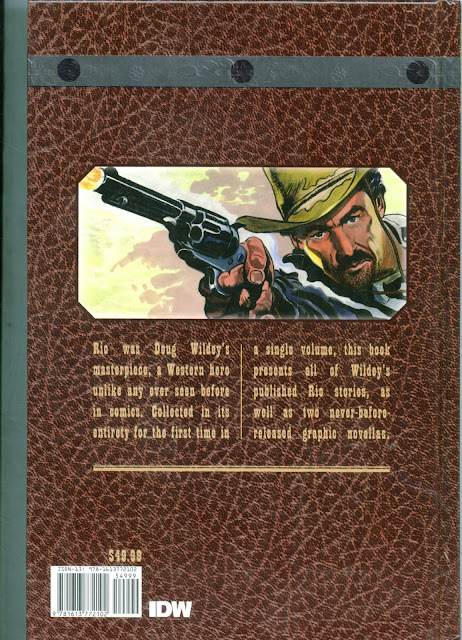 The right choice for a typeface. Nicely handled background pattern. Edge stripping reinforced by faux straps, simulating an old trunk. Clipped corners simulating an old school photo album (ask your mother or grandmother about those!).
And that's just the cover. The inside is even more striking, as alluded to in the above pages.
When choosing the Best of... annually, I try to avoid the traps to which many other such lists seem to fall prey. I don't list what I think are the most important, artistic (whatever that means) or profound books. I don't care about cutting edge stuff, unless it's well done. And I am SO bored by adults who deliberately try to draw like little kids!
What I care about is a book that will continue to pull me back to it a year, two years, five years or more later.
Since I've been reading my copies of the original Rio albums since they first came out, it's clear to me that this is such a book.
Tomorrow: The Best Comic of 2012.
Oh, and here's Wildey's interpretation of Jonny Quest, from a Comico miniseries offering his interpretations of classic TV episodes, just because it's so cool! 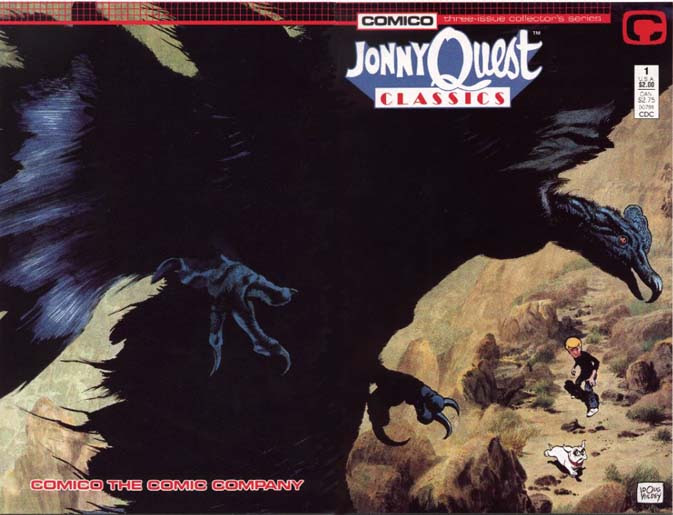 Only three to go for this year's countdown.
I was first epxosed to the work of SF writer Jack Vance in the Canadian groundlevel SF title Andromeda #4, edited by Dean Motter.
I must apologize for not having the foresight to scan my copy of the cover for this post. You're denied the lovely wraparound cover!But here's half the image... 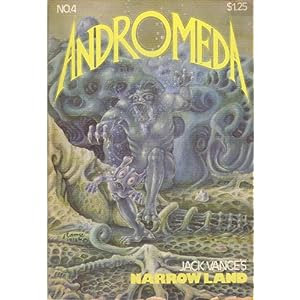 The title also featured stories by A.E. van Vogt and James Tiptree, who we came to know as Alice Sheldon before her tragic suicide.
At any rate, Andromeda was one of a handful of ambitious and mostly successful titles in the groundlevel movement of the 1970s and 1980s.
I had no idea what to expect when I picked up this issue; I'd been buying the series and elected to stick with it. What I found- well, here's a synopsis from an Amazon review:
"The Narrow Land" (1967): Ern the crested water baby, having hatched from an egg, must try to find his way in a strange world, consisting of a strip of land and sea bordered by a wall of storm and a wall of night. Unusual for Vance in that the protagonist is not human.
The elaborate world and flowing language blew me away. I resolved to read more Vance but let it slip.
Don't pelt me with rocks and garbage. I'll get there. I just finished Cornell Woolrich's The Bride Wore Black, which has been on my list just as long!
I was both pleased and curious to see this new adaptation of a Vance work on the shelves at The Source in St. Paul. Being a poor woman, I got it from the library.
And I was enthralled with what I read and saw.

A murder mystery set on a world bound by a strict caste system, the story is compelling. Our hero is tasked with solving the murder without violating the complex social taboos of the society into which he is plunged.
The caste is twofold. The status of an individual is set by the mask worn and by the instrument played. Each has a specific meaning and the violation of either or both is an offense of the highest order.
Here are some of the instruments and their meanings: 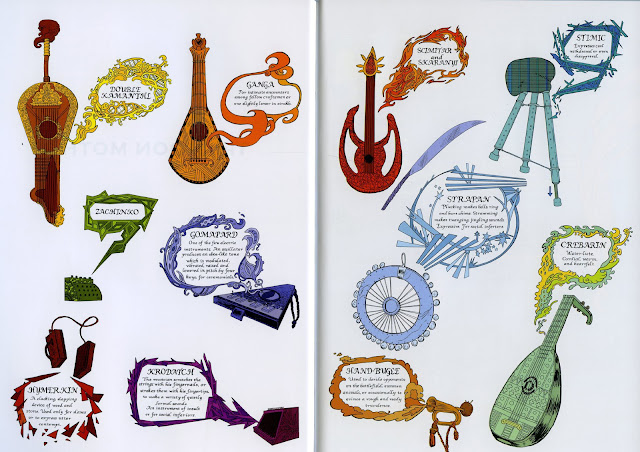 And some exposition showing the tension of the writing: 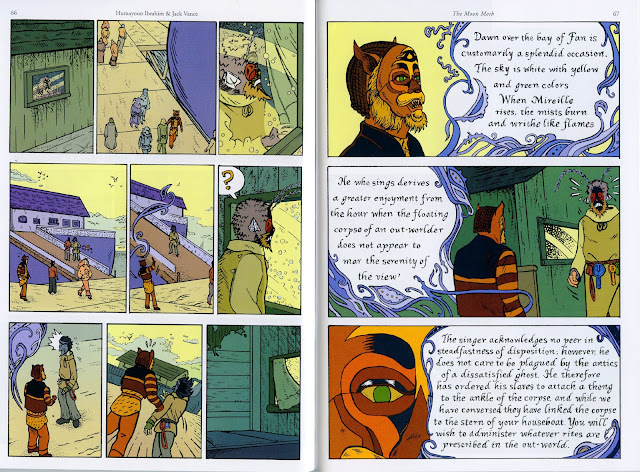 Moon Moth is one the masks worn by the offworlder as he tries to solve the mystery and bring the killer to justice.
It's a very clever device. How can you know for whom you search when everyone is masked? Similar to the telepathic device in Alfred Bester's The Demolished Man in some respects....
Illustrator Humayoun Ibrahim brings a wonderful blend of pragmatism and imagination to his storytelling. A BFA graduate of School of Visual Arts, this is his first mainstream professional work. His work shows infulences of classic SF illustration, notably the work of Frank R. Paul. His next book, Decelerate Blue, is due out in September 2013.
While this book demands attention of the reader, if the reader engages, it's more than worth it. 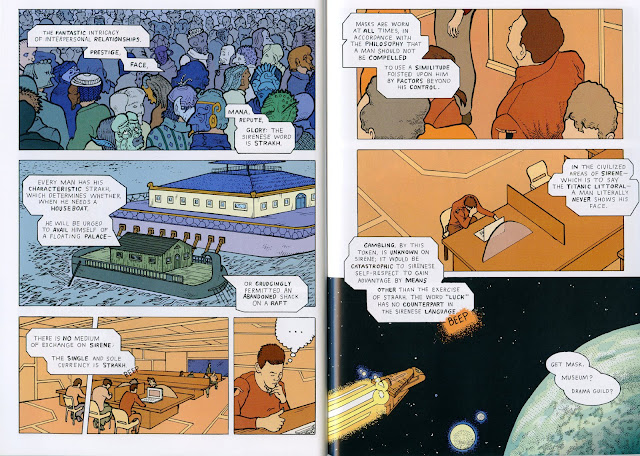 This spread offers more exposition on the structure of the societal structure of the planet Sirene, our setting. There's a nice empathetic device here- the protagonist struggles to learn the elusive system as the readers do.

The publisher, First Second, is the graphic novel imprint of Macmillan, and offers a wide range of stories. Many of their titles are aimed at younger readers, but they also include some Eddie Campbell works in their catalog, along with the collected edition of Sailor Twain, listed in last year's Best of...series.
I hope more Vance adaptations are forthcoming. This is quality work in every way. And the only credited author is  Vance himself. Though 97 years of age(!), Mr. Vance is still with us, and may well be the last surviving Grand Master from the Golden Age of Science Fiction (I consider Harlan Ellison to be a Silver Age or New Wave author, depending on which set of arbitrary terms you choose to use).
But I digress yet again. This is a fulfilling, challenging read, illustrated with panache and great control, well worthwhile.
Tomorrow, No. 2 in the Best of 2012, high adventure from the Old West, finally given its due!