Ideas are free, so give away your book!

Lewis Hyde has written a MS titled Common As Air.
I've only read reviews and commentary, and may alter my opinion after I digest the entire volume, but I'd like to respond.
Essentially, Mr. Hyde is going with the concept of the "cultural commons". A "commons" is a shared set of necessary goods and services that help a society function, whose costs are borne equally by members of that society according to agreed rules.
However, Hyde also argues that anti-piracy legislation is "propaganda", as evidenced from this panel of Ward Sutton's review on the Barnes & Noble web site. This implies support of intellectual piracy. The irony of a bookseller's web site running a review of a book advocating this idea is not lost on me. 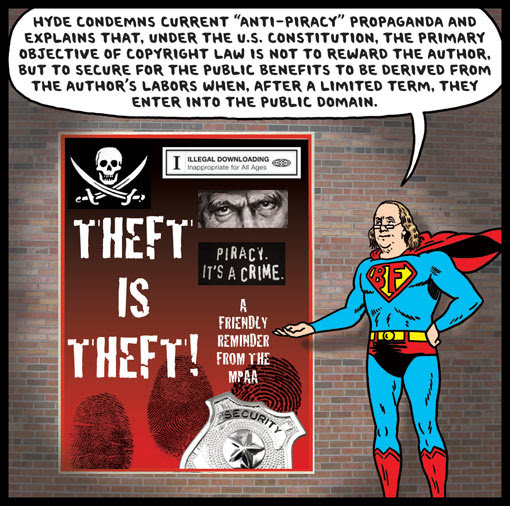 While it's unclear from the reviews and comments how Hyde's "cultural commons" is funded, it poses huge threats to creative individuals who hope to make a living from their work.
This model has been shifting for a couple decades now. The argument about downloading quickly evolved from "right and wrong" to "adapt or die".
My take is that we need a structure that supports artists, writers and musicians. It's unreasonable to presume that such labors are unworthy of pay, especially if one values them enough to consume them.
Some creative people have done their own end runs on this. Nina Paley's spectacular animated film, Sita Sings the Blues, uses the creative commons license by choice. I'm not sure what her success rate has been, but the laudable work is out there and as much under her control as she wishes it to be.
Perhaps that's the key. If a creator cannot control the price of their own work, we as a society have decided that said creator is not entitled to that control.
To quote Colleen Doran:


Art is WORK. Don't devalue our rights to fair pay and treatment as the complaints of the privileged. We won't be silenced by people who try to make us feel guilty for committing the original sin of making art. Take it from an artist who is a farmer. Physical labor is not harder than making art. Unlike ANY OTHER LEGAL WORK ON THE PLANET, it is the only work people think we should feel guilty being paid for. HELL, NO!

Hey, I have an idea. Let's do a FLAC download of Mr. Hyde's book and spread it around. Great ideas  deserve to be shared, and it's his idea, so he shouldn't mind.

Hm. It doesn't seem to be posted on Google Books, only the title and blank pages. Guess Mr. Hyde doesn't practice what he preaches.