Once more into the breach with the next chapter! 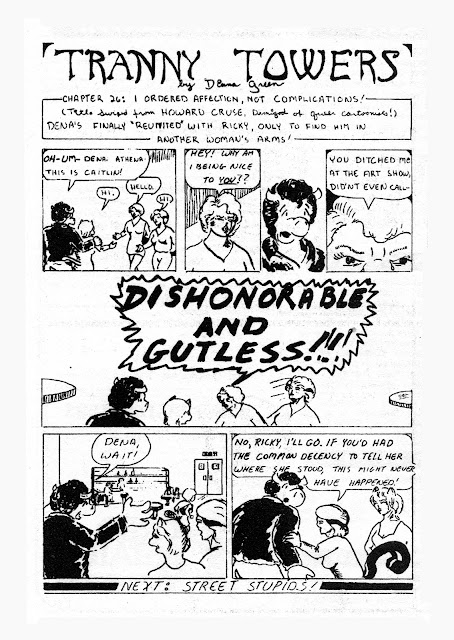 Another tearsheet scan. This one definitely needs to be rescanned from the original art. There are dropouts in the bar in the bottom left panel, and the big text in the center tier is actually 50% gray outlined in black.
Plot notes: this is the point where the Agnes Nixon axiom comes into play. The strip is fundamentally a soap opera, and Nixon, who created some of the best (including the sorely missed Ryan's Hope), once noted that soap opera plotting consists  of people doing all the wrong things for all the right reasons.
There's also some wish fulfillment here. This is how part of me wishes I would have behaved in a similar situation. Though it accomplishes nothing, telling off someone who's humiliated you in that singular way (not having the courage to let you know what's going on and making you find out the hard way) does have a bitter satisfaction, however Pyrrhic and short-lived the victory.
Simply put, it's one of those times when you REALLY want to tell someone off, though you know it will do no good at all, just for your own pride.
Swipe file notes: the title is properly credited to Howard Cruse, whose gentle wit inspires me. The masthead text is copied freehand from a book of Art Deco typefaces (a Dover book, I think). The line "dishonorable and gutless" comes from the powerful film Cutter's Way.
Next: Chapter 27, the street fight.
on May 27, 2012 No comments: