Every year, some remarkable and unexpected reprint projects present themselves. There were several in 2016, and a couple of them made the list.
The first one takes a little explanation.
In the mid 1980s, Art Speigelman was bringing out the iconic RAW anthology. At the same time I was reading these, I began listening to The Residents, Tuxedomoon and Snakefinger. The strangeness and beauty reminded me of The Doors and of the compelling aspects of Dada, to which I was first exposed late in high school. I was privileged to see Snakefinger in concert once, a remarkable experience. Simultaneously poetic and raw, aggressive and vulnerable, dark yet hopeful, Snakefinger sounded like no one else.
And the record covers were equally compelling. 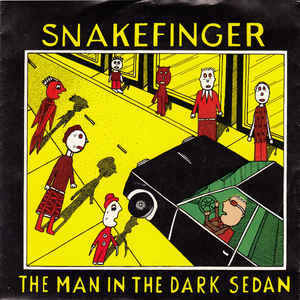 I was fascinated by this image. It reminded me of the late Rory Hayes, whose horrific primitive works in early undergrounds were simultaneously innocent and brutal. When flipping through issues of RAW, I woke up and recognized it as the work of Mark Beyer. Beyer's AGONY was published as one of a series of RAW One-Shots.
AGONY is back in print in 2016, courtesy of New York Review Comics (an imprint dedicated to reprints, currently numbering nine volumes). They did a fine job, printing cleanly and binding the work well, while not jarring with the work's overall aesthetic. Several years back, there was a deluxe two-volume slipcase edition of Gary Panter's work, and I remember thinking how odd it was to have such aggressive and "street" art in such a lush format. In contrast, the new edition of AGONY has a decent dustjacket and a plain white cover.
So what's it about?
Well, the title actually sums up the work pretty thoroughly!
This is part absurdist theater, part Grand Guignol, part mean little kid. The story is so implausible as to be laughable, yet the reader can't help but feel sorry for our hapless heroes, who seem to be the only two decent people in the world, constantly beset by the vicissitudes of nature and the caprices of their fellow man. Like the best of Crumb's more outrageous works, this leaves me laughing and cringing at the same time. To quote the promo blurb from the publisher's web page: "ENJOY THE ECSTASY OF AGONY. Amy and Jordan are just like us: hoping for the best, even when things go from bad to worse. They are menaced by bears, beheaded by ghosts,  and hunted by the cops, but still they struggle on, bickering and reconciling, scraping together the rent and trying to find a decent movie. It’s the perfect solace for anxious modern minds, courtesy of one of the great innovators of American comics. Now if only Amy’s skin would grow back ..."
My only problem is a minor issue with the layout. In the new edition, each panel is presented as a  single page, while other versions have used the classic 6-panel grid shown above. I think it flows better in the earlier format, but it's such a thin volume that the new panel per page presentation may have been more strategic than aesthetic.
That minor quibble aside, there's a lot going on here. Beyer plays with time much as Dali and Bunuel did in Andalusian Dog. The story is set in February 0000. Captions include the obtuse "soon" and "two weeks later". Beyer's work alternates/intersects the violent melancholy of the relationship commentary in the Dali/Bunuel film with the adolescent puerile humor of early John Waters films, to great effect.
The lyrics to the single pictured above come to mind in summing this book up:

You can follow me and I guarantee to take you far away
But we must leave before the eve of everlasting gray
Next: Best of 2016, No. 14: Strange days indeed.
on January 03, 2017 No comments: