Some years ago, I posted on the wonders of comic book cookbooks, and comics containing recipes.
With some trepidation, I recently read Lucy Knisley's graphic memoir Relish: My Life in the Kitchen. The hesitation came from a suspicion of classism- a powerful issue in food politics.
In some ways, Kinsley's work is elitist, and in many others, it's not.

While she unapologetically devours foie gras with barely a whisper acknowledging the controversy surrounding it, she also maintains a lifelong love of fast food, much to the chagrin of her caterer mother. Paradoxically, she has a derisive parody of those who demean the lack of nutrition in fast food, portraying them as stereotypically fat and stupid. It's only one panel, but it does harm her credibility as regards sharing the joy of food, ostensibly the purpose of the book.
The book is still a delight to read, and in fairness, she never claimed to be offering a political discourse on food, only her own life with food. But aren't such comparisons inevitable? How can we relate to her life in food if our lives around food do not include catering and high-end cooking, or eating in other nations?
Strangely, at almost exactly the same time I read this book, I saw a documentary titled Food Stamped.

While this also ran the risk of bypassing some of these issues, Food Stamped recognized the various issues around food at different income levels, much more than did the Knisley book (admittedly, the works had very different stated purposes). While I occasionally found myself irritated at some of the more organic-than-thou attitudes of the couple in the film, I did respect that they went to people who have to live on food stamps, and treated their choices with respect. Like Supersize Me, Food Stamped also looks at school nutrition programs, and goes out of its way to make the salient point that diet effects productivity in many ways. The couple even notes changes in their own attitudes and capacities as a result of their restricted food budget, despite a Herculean effort to eat organic food.
Neither work is flawless, and neither is irrevocably flawed. Relish is a delightful, involving book, even if it does gloss over some issues I find vitally important. For the third time, to make the point, that's not Knisley's stated purpose, so it's hard to take her to task, except to recognize the inevitability of the omission.
Relish has one other very strong quality. The recipes are beautiful and easy to follow. Though I checked this out from the library, I may be adding it to my cookbook shelf! 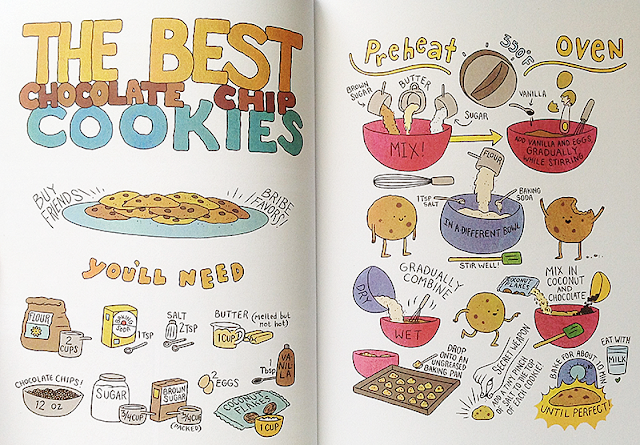