Skipping No. 100, as previously threatened.
Work on the move continues apace. Had a big and fairly successful yard sale yesterday. Will post some photos and thoughts on the issue of Stuff. Lots of fun talking comics with people!
As such, little time for the drawing board or the sketchbook this week. I've not forgotten about A Private Myth, or my sweeties, The Surrealist Cowgirls. Their day will come again.
Meanwhile, more inventory art.
A couple fun pieces that I'm pretty sure I haven't posted yet. 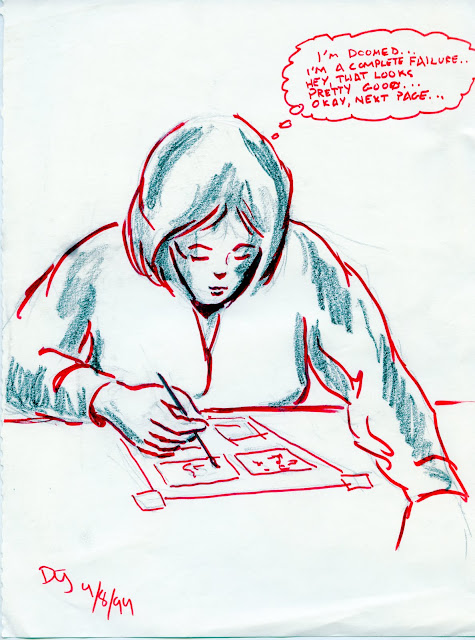 This was done as a self-portrait for an anthology of MCAD student and alum work that never saw print. I'll post the story I did for it soon. It's a fun, bitter little story.
The self-deprecating aspect of this is still kinda charming to me, but also a bit annoying now. I get it that every artist has to work through this insecurity concerning their work repeatedly, but the time it takes to work through it should grow shorter as your skills evolve. That's been my experience anyway.
And a more serious piece... 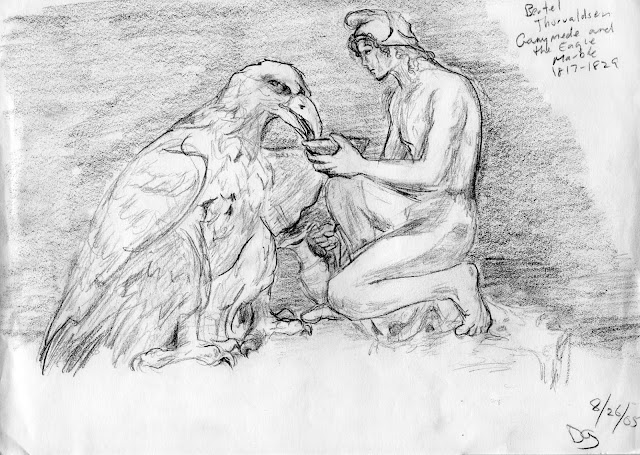 This was done on a museum outing with some of my drawing students. It's mostly successful, but that foot- yeesh!
I would have liked to push the values farther as well.
Next week- well, we'll see. New classes start tomorrow and I'm still in the throes of the move, so there's going to be SOMETHING here....hmm....
Meanwhile, thanks for your reading loyalty during these hectic times!
on August 28, 2011 No comments:

The move proceeds apace.
I have a place located, a lease signed, a yard sale coming up, a new teaching job starting on Monday, my second job is picking up steam, and I have begun (by inches) to pack.
And stuff to throw away. So much to throw away!
Still no time to draw! Aargh!
So to tide you over, another Tranny Towers chapter. I'll post something different next time, just for variety. 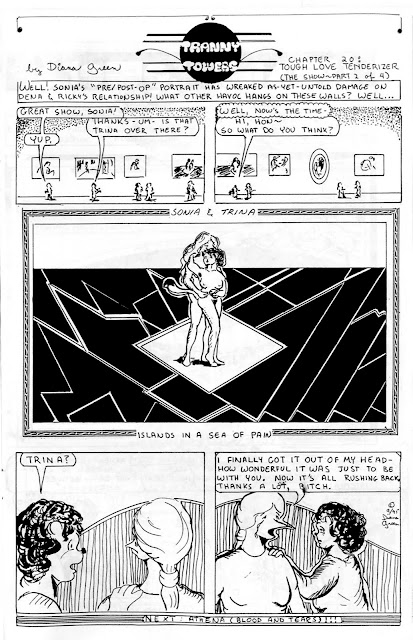 This one turned out pretty well. If and when I do a definitive print collection of these, I'll probably redo all the lettering digitally.
The geometry and harsh angles of the painting were fascinating to me.
I also really enjoyed playing with the mastheads on these. I guess I got bit by Will Eisner! Then again, who didn't?
Next: something else, as we close in on the move!
on August 25, 2011 No comments:

Before I present the work, a big mea culpa.
I know this is way late, but a moment, if you will.
Just under two weeks ago, my housemate informed me that she needed to move her ailing mother into the house, so I would need to find another place to live. She gave me a reasonable time, but what with turning cats over for adoption (sob), work picking up on my current job and with  new teaching jobs about to start, and with the mania of looking for a place (and looking for the money to move!), I've not had time to post art, let alone make any.
Until the situation settles, I will be posting previously unpublished inventory.
I will skip No. 100 in my numbering and come back to it. I still have a very specific piece in mind for that.
So while the dust is flying, please enjoy another episode of Tranny Towers. 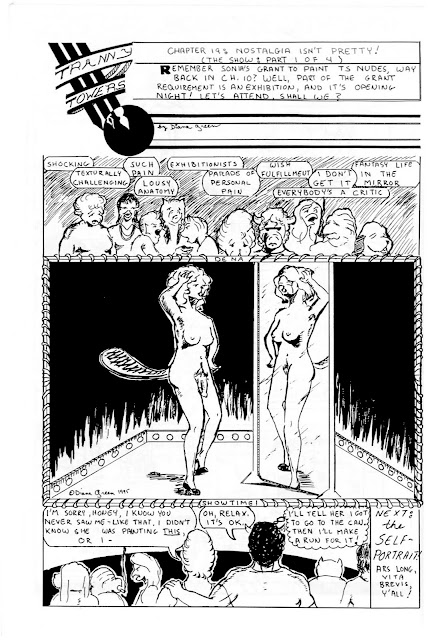 This is one strip where I fear I may have gone too far. Full frontal pre-op TS nudity is more than some people can handle, even in cartoon critters. It's also more than I'm usually comfortable with. Many of us are very private people, and constantly juggle the need for self-expression with the desire for privacy.
Rick's thought balloon is a swipe from a Bode' Cheech Wizard strip, in which Cheech is attempting to escape from a horny nymphet, and thinks "I'll tell her I got to go throw up in the bushes, then I'll make a run for it."
But I thought the art show was a great vehicle for exploring different aspects of the characters.
Next: ?
on August 17, 2011 No comments:

A birthday card for Reed Waller

Today is the birthday of Omaha the Cat Dancer creator Reed Waller.
I've occasionally written here about working with Reed. To say Omaha was an inspiration for Tranny Towers is a bit of an understatement, though I like to think I put my own spin on the whole funny animal soap opera thing.
I have no idea how Reed is doing these days. I've not talked to him or corresponded, aside from reading the occasional post on the Yahoo Omaha boards, for more than six years now. To the best of my knowledge, he's well and his job is treating him decently.
We hope for the best.
New work on Omaha proceeds apace, appearing in the otherwise unappealing Sizzle magazine. Actually, the last issue of Sizzle I read, issue 50, had gone from painful to tedious (aside from the Omaha stuff, of course), so I guess that's an improvement. The next Omaha installment is currently scheduled for issue 51, due out in September.
While reading Bryan Talbot's superb funny-animal Sherlock Holmes Steampunk pastiche Grandville, I noticed a guest appearance by Omaha! 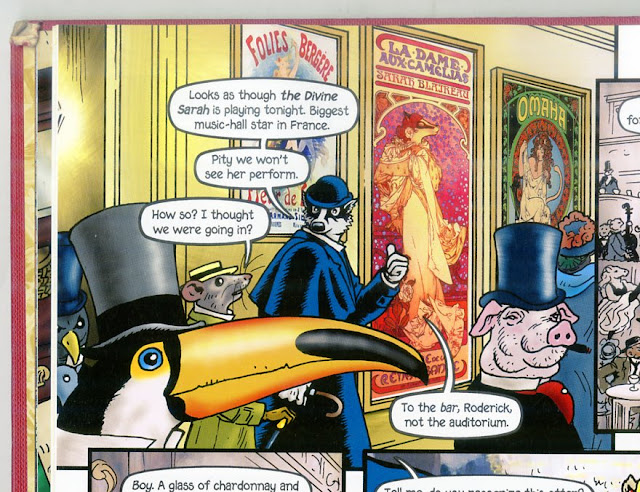 Here is the image in context on the page proper. 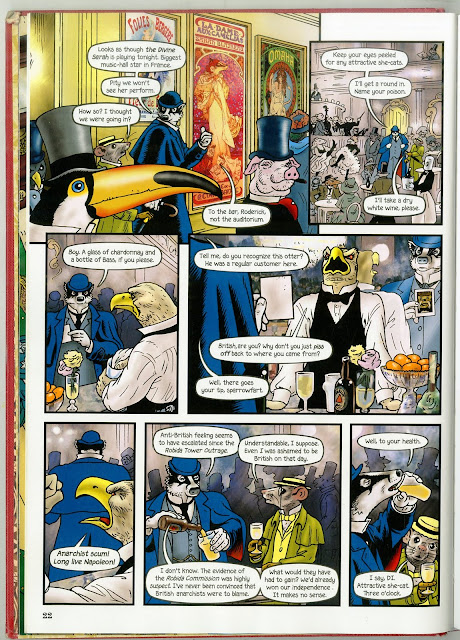 I suspect that Reed would be honored to have one his pieces included in a Bryan Talbot book, and next to a Mucha at that!
I can't tell if Talbot redrew these or pasted them in. His Photoshop chops are evident throughout the book, but he certainly has the skill to do it either way.
I've been tinkering with posting this for a while now, and the occasion of Reed's birthday seems an appropriate time to do so.
The rest of you: check out Grandville. Either volume. They stand alone, but there is a continuity, so you're probably better off reading them in publication order.
Steampunk funny animal noir. No reason it should work, but it does. It's smart, exciting work. But then, what else would you expect from Bryan Talbot?
There are currently two books in the series, Grandville and Grandville Mon Amour, with a third, Grandville Bete Noir in the works. The publisher is Dark Horse.
Here's looking at you, Reed D. Waller! Happy birthday!
May the next year be kind to you!
(image at left: portrait of the protagonist from Grandville, Detective Inspector LeBrock).
on August 03, 2011 1 comment:

This post was delayed by a writing deadline that ate two days more than I expected, and the extra sleep required thereafter.
Here is Chapter 18! As always, click on the image for a larger version. 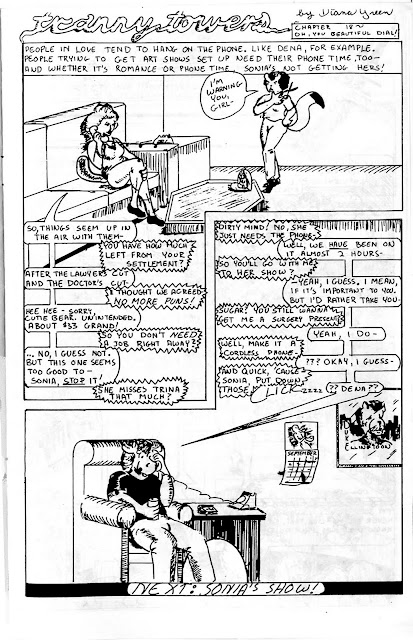 A couple things about this page:
First, it's necessary for plot development. The lead up to the big event, as it were.
Second, doing a dialogue heavy page and keeping it visually interesting is always a challenge.
And I didn't have a copy of Wally Wood's classic 22 Panels That Always Work on hand to swipe from!

Third, the strip is quite dated. While some households still have land lines, few of them have cords, which is what makes the gag work here.
All that said, there are things about this strip that work well for me. The dialogue taking up the center of the page while still having a panel flow and taking place in two distinct locations is a nice touch.
Next week: Surrealist Cowgirls, It Does This, page 8!
on August 03, 2011 No comments: