In order to get back on schedule, I am posting two more Tranny Towers pages. 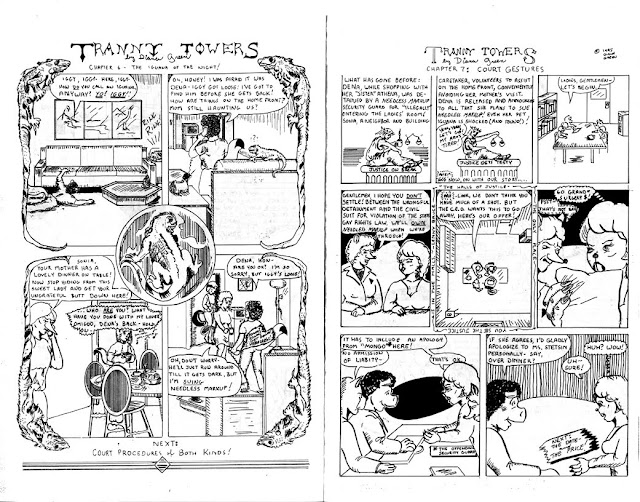 For me, this is when the strip started to hit its stride.
The narrative began to go in some new directions, and I was having some fun with the design of the page. The visual shorthand of the funny animal stuff was a bit on the nose at times- a fox as an attorney, a bull as a security guard, and the one that eluded most people at the time: a beaver as a pre-op transsexual.
Due to the minuscule size of the original printing, the Lenny Bruce quote framing the center panel of the second strip in the spread- "the halls of justice, the only place you see the justice is in the halls"- all but disappeared in the work's first appearance.
As frustrating as it gets at times posting old work rather than new, I am enjoying revisiting this material. The writing is much better than I recall, and while I may never do anything new with these characters, watching them evolve into who they were all along was an exciting process.
I recall being told as the strip was near its end that the people in the Lavender offices hated it. Quite frankly, this hurt me a great deal.
So imagine my joy at meeting performance artist Cindy Baker at the national PCA Conference in St. Louis this April and having her recall the work! She told me that she and her partner loved it and couldn't wait for the next episode to come out!
Maybe more people "got it" than I knew.
In any event, revisiting these is a revelation in itself, and more of a pleasure than I expected.
Next: the ladies in A Private Myth start a small adventure.
on September 12, 2010 No comments: