Grinding away at these, despite continuing to work 45-50 hour weeks while I do class prep. I love doing these pieces, but finding the time remains a challenge.
Today's entry is another fine work by Kurt Busiek, whose Astro City made the list previously. I also loved Arrowsmith, and would be tickled to see its return. At any point! Print it, I'll buy it!
Tooth & Claw has been described by others as "Game of Thrones with animals". While that's a bit on the nose, Busiek does use the animal mythos to tell his tale. It's a world of magic, run by sentient and slightly anthropomorphized critters. The species tend to go with their character types. As a lover of bison, I was a bit saddened to see them portrayed as aggressive and warmongering, basically dumb working class stiffs.
That aside, there are several traditions that come into play here. It relates peripherally to the Omaha the Cat Dancer school of funny animal comics, in which the characters are more human than animal and species is used a shorthand for character type, as noted above. Other significant offerings in this area include Bryan Talbot's Grandville series and the Blacksad series, both of which had new books out in 2014 as well. There's also the mythology of humanity being succeeded by sentient animals- not much of a spoiler, really. As soon as the Colloquy started talking about the mythical Great Champion, it was pretty obvious it would prove to be a human, despite the red herring at the end of Issue 1. But that was a great red herring! A fox astride a saddled cricket- brilliant!
Ahem. Past precedents for sentient animals surviving humanity's demise include Clifford Simak's CITY and the classic MGM Christmas cartoons Peace on Earth and Goodwill to Men, the latter being the last MGM cartoon in CinemaScope. So it's not really a new concept, but the execution is fresh and uniformly professional. If it loads properly, here's the first of the two.

I've not seen Ben Dewey's art prior to this book, and the art integrates so cleanly with the text that I can't imagine a better fit. His work has verve and just the right amount of detail, plus plenty of the ornate flourishes that fantasy fans crave.

It needs to be noted that an unintentional trademark infringement required a title change to The Autumn Lands: Tooth & Claw. Two things come to mind.
1. Does this mean my copy of the first printing bearing the original title will be (gasp!) collectible? Oh, big whoop. Actually, I rather hope not. I've beat my copy up so much by repeated readings that it's worthless to anyone but me now.
2. Given the nature of the original work bearing said trademark, Busiek & co. are better off not having any association with it. I've included a cover of the earlier work bearing the title to prove my point.
All that said, Tooth & Claw remains a compelling story. Like the best of Busiek's work, it's rousing adventure coupled with smart, sensitive characterization and a storyline that, though walking a well-trod path, remains innovative and engaging, well worth the reader's effort. 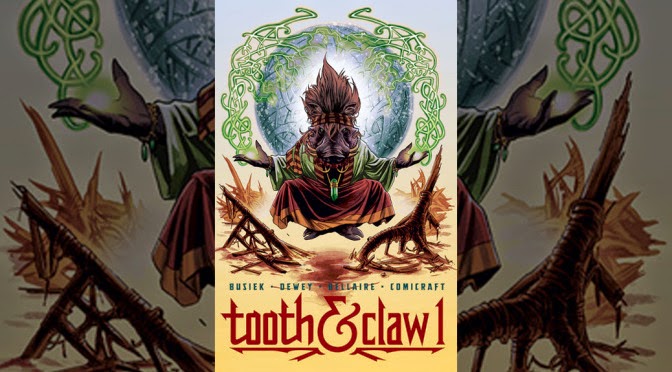