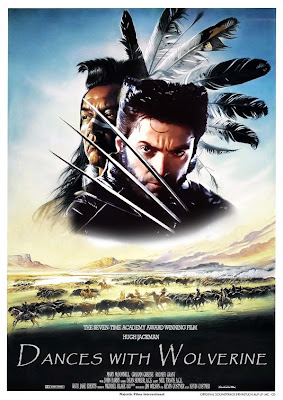 I'm usually not much on the whole mash-ups thing ( do we even still say that?), but this was too much fun.
Mind, there have been some decent superhero Western comics.
There's Denny O'Neill and Jim Aparo's mini-epic for Charlton, Wander (okay, more of an SF story than a superhero, but still elements).
The original Ghost Rider comes to mind. A Western supernatural superhero (say that three times fast!).
The Western Batman, Zorro, is a perennial favorite. His current incarnation from Dynamite is quite strong, with subtler characterizations than might be expected.
The most appealing to me remains The Lone Ranger.
There's DC's Vigilante and El Diablo, Marvel's flawed by ambitious Red Wolf, the SF superheroine Dawnstar in the Legion of Super-Heroes, and arguably, the Man With No Name revisioned by Vertigo as Preacher.
I feel like I should have something quite profound to say about all this, but it's late. Let's just tickle the idea for tonight!
on August 19, 2009 No comments: