Singing for our lives

Last night, the choir I belong to, Trans Voices, sang as part of the Transgender Day of Remembrance ceremony at Spirit of the Lakes Church in Minneapolis. Though this event has occurred annually for a decade and takes place in major cities around the world, this was my first time attending, due to prior work conflicts.
The point of the event is to remember the trans folk who have been murdered in the previous year.
The 2008 ceremony celebrated approxiamtely 36 lives.
This year's ceremony, with a couple last minute additions offered by people in attendance, commemorated 170.
One hundred and seventy.
The way the ceremony worked: our moderator, Barbara Satin, made opening remarks. A poem was read. The Chorus sang two songs, and did quite well, I thought, much more confident than we were in rehearsal. The songs were This Is Me and Here's Where I Stand.
Then we took turns reading the names and ages of the victims, if known (many were not), date and method of death. After we read our names, we lit a candle for each of them, as the next person read the names.
Due to a momentary dearth of people to step forward for reading (out of a crowd of well over 100), I read twice. I was stopped cold when I got to the this poor girl:
Carol de Souza
17
Died Sept, 13, 2009
location of death: Caratinga, Brazil (by a brook)
Cause of death: stabbed
Seventeen. She was only seventeen. Barely knowing life, yet already knowing who she is, and dying for it.
But what choice is there?
During the open mic portion of the program that followed, I said that we must have great power, we must really scare them, if they're willing to do all this (shootings, stabbings, beatings, mutilations, dismemberment, decapitations and more atrocities) to us.
I am reminded of this scene from V for Vendetta. The comic is better than the film, but the film is still worthwhile.

Following the reading of the names and the open mic forum, our choir closed the event with a rendition of the full version of Somewhere Over the Rainbow. Everyone in attendance joined in for the final verse.
I am hardly an American Idol fan, but this is the only version of the song I could find that includes the intro we performed.

There was a photographer from Lavender magazine in attendance. I will post photos when they become available.
All in all, a powerful, empowering, rage-inducing night that somehow reinforced my belief in our own strength.
This image from one of last year's events says it all. 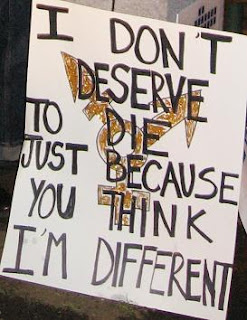