Another book that slipped by me for years.
I have little use for most of the Spawn franchise. I enjoyed some of the guest creators' work in early issues, and the rest of the stuff Alan Moore did for Image, while far from his strongest work, was an engaging read. But in general, Spawn leaves me cold.
These two detectives, Sam Burke and Maximillian "Twitch" Williams, were spawned (yeah, I know, I did that on purpose just to get it out of the way) of the early series. They were sufficiently well received to get their own titles, a series of shorter and longer minis. 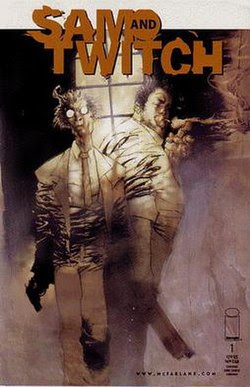 It's tense, witty and gritty detective stuff. There's an unflagging loyalty between Sam, the muscle, and Twitch, the mind. It's brutal and ugly, but like Warren Ellis' FELL, it's ultimately about holding onto your humanity in the face of that brutality. 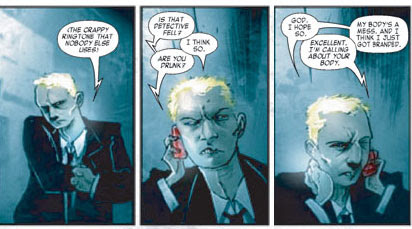 The 2010 series, by writer Luca Blengino and artists  Luca Erbetta (pencils), Fabio Bono (inks) and Filippo Rizzu (colors), deals with a killer who is carving a novel into his/her victims, word by word.

The book is a tough read at times, not so much because of the content, but because of the visual style. The art is gritty, sketchy and full of detail, bringing to mind Alex Maleev's Daredevil run. Since Maleev's Daredevil writer, Brian Micheal Bendis, also wrote an earlier Sam & Twitch run, that's not surprising.  But the real issue is the text.
No word balloons here. Free floating text, reversed out of the art and connected to the speaker bu a simple line. It scans, but it takes some getting used to. 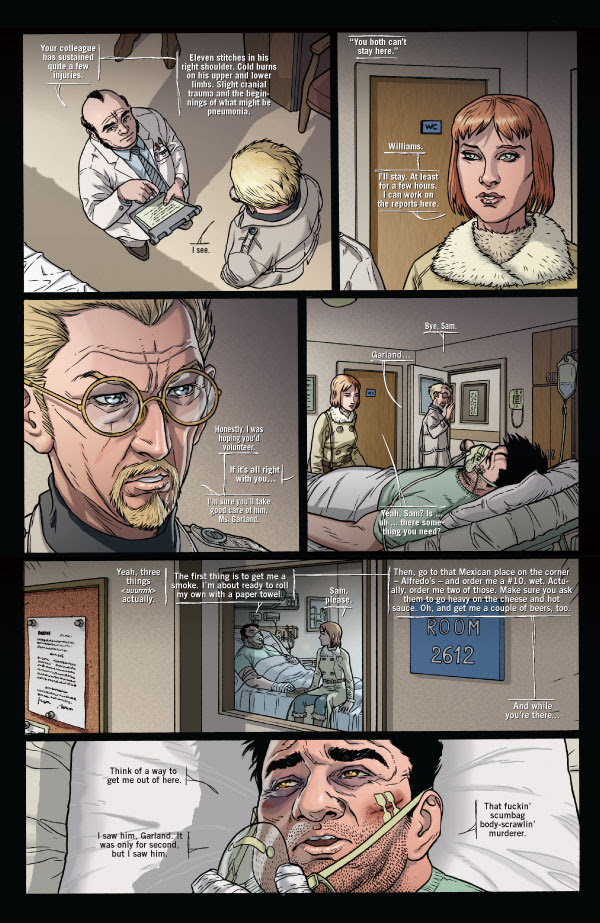 This is far from the first comic book to use typesetting. Even before the digital revolution (whatever that is), EC Comics were lettered using a Kroy lettering machine that created incredibly uniform text.

And Walt Kelly typeset the speech of his sideshow barker P.T. Bridgeport, though he may have just used presstype- it's been a while since I've seen a Pogo original to confirm, but I recall seeing some text pasteups.

In aid of their detection, Sam and Twitch enlist the aid of a graphologist to help them decipher the text, and locate its murderous author, if the killer is indeed the writer,

As our detectives search for the killer, they are put at risk. Following an uncompromising fight, Sam is hospitalized as Twitch has the final encounter with the killer.
Much as with Holmes and Watson,  Mulder and Scully, or in an unlikely way, House and Wilson, Sam and Twitch are a team with a specific personal chemistry and a bond of camaraderie.
These sample pages only allude to another aspect of this series. It's quite bloody. Most of the time, I don't care for that. Here, it works and it serves the story.
I'm a bit embarrassed that these characters slipped by me for so long. Rest assured, I'll not bypass them again.
Tomorrow: Best of No. 5, a very tasteful book.
on January 10, 2011 No comments:

There are spoilers in this post. The story's been kicking around for a while, but a caution seemed apropos.
An elegy is "a poem of serious reflection, typically a lament for the dead." That's the dictionary definition.
In Greg Rucka's stunning work, it's a lament for lost career, lost love and lost family, all lost to a gay woman's integrity.

But like all deaths, each implies the possibility of new life.
Kate Kane's relationship is lost to her nocturnal activities as Batwoman, a role she undertakes out of a sense of moral necessity. The first death. This is in itself a departure, as most who associate with Batman's mission do so in response to some sort of violation.
Kate's sister is lost to terrorists, the price of her father's military career. The second death. However, the sister resurfaces as the insane villain The White Queen, a sort of female Joker (though that description does not do her justice).
Kane's own military career is truncated by her honesty about being lesbian. She chooses to honor the cadet's code: a cadet will not lie, cheat or steal, nor suffer others to do so.  Like Margarithe Camameyer before her, she chose honor over career.
The last death.
Her choices were always moral, never easy. 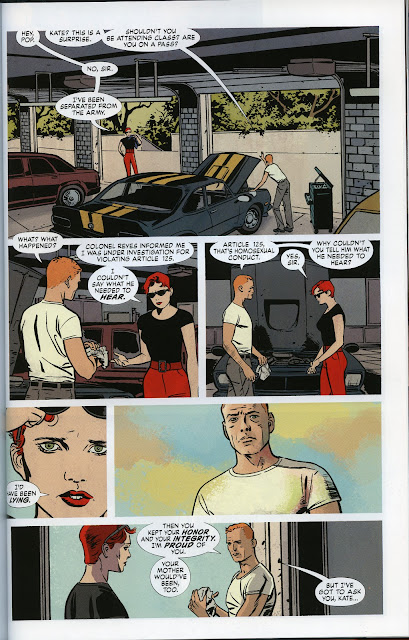 Following her discharge, Kate meets Renee Montoya, closeted Gotham cop at the time of their meeting, who later assumes the mantle of The Question.
Like Bruce Wayne's parents, Kate is attacked by a mugger. Unlike them, her attempt at self-defense succeeds. Declaring herself a soldier, she looks up after her assailant has departed, sees a silent Batman, then the Bat signal, and knows what her next uniform will be.
This is strong on so many levels. It avoids the standard saw of a woman becoming a hero after being attacked. I agree with the late Kate Worley. Rape-based origins are insulting and unimaginative.
Most male heroes have something taken away from them- parents, family, career, home. Most female heroes have their bodies violated in some way. Seeing this tawdry trend reversed here is refreshing.
Greg Rucka is no stranger to writing realistic, strong women. His work on Whiteout and Queen & Country are exemplary. I even liked Countdown to Infinite Crisis. And I loathe most of those sprawling, galaxy chanign events storyline.
And the sexuality is not played for shock value. It's simply an important part of who the character is. I must comment on the art. I've admired J.H. Williams' work since I first became overtly aware of it in Promethea.  Here's his cover art for Absolute Promethea, book 3. 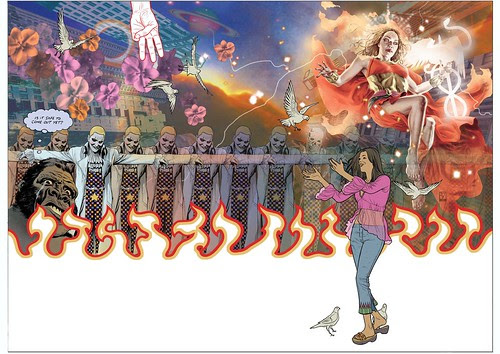 Williams' work has that photo-realistic aspect, but coupled with a strong and highly informed design sense (his Promethea covers included homages to Parrish, Warhol, Peter Max, and the Superman/Spider-man crossover) and an incredible imagination.  Along with Haden Blackman, he's writing and drawing the new Batwoman: Zero series.
The page designs of this book are remarkable, not just for their clever and effective visual elements, but for the successful integration of those elements into the narrative. Anyone with technical skill can toss around pretty pictures and shapes. It takes storytelling talent to not let those elements get in the way.
Most significant and least discussed visual element of Batwoman: Elegy: her costume.
For decades I've been playing with a superheroine costume that's functional as well as aesthetic. I mean really. Look what Saturn Girl "gets" to wear for a fight. 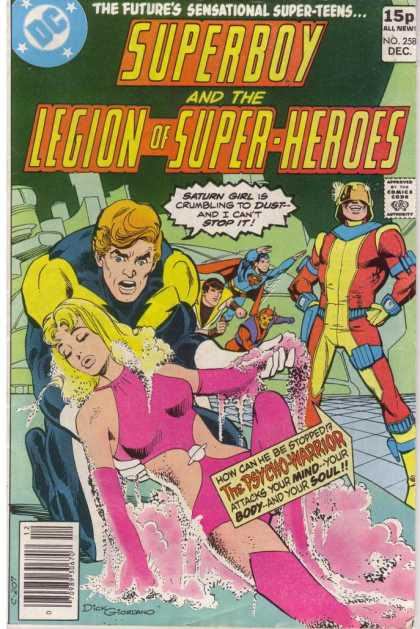 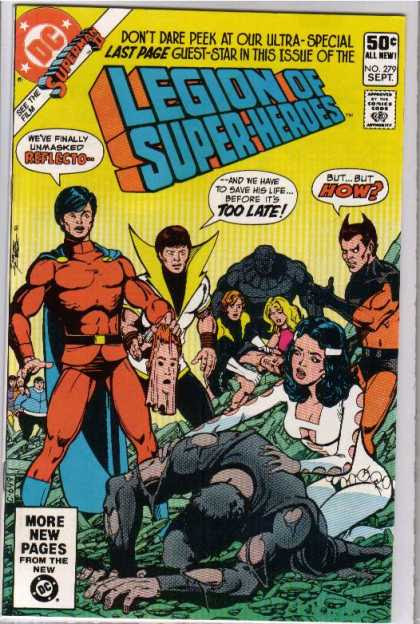 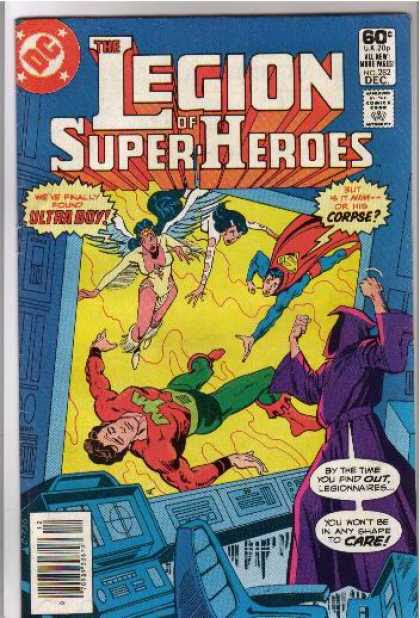 I'm not talking about politics as much as I am strategy. Imagine flying through the air with huge portions of your body exposed, to say nothing of the difficulty of fighting in such unlikely togs.
Batwoman has designed her costume more as a military uniform. Every part of it is geared towards its combat capacity, from the materiel used to her hair!
And those boots! Finally, a superheroine who doesn't wear CFMs to fight! 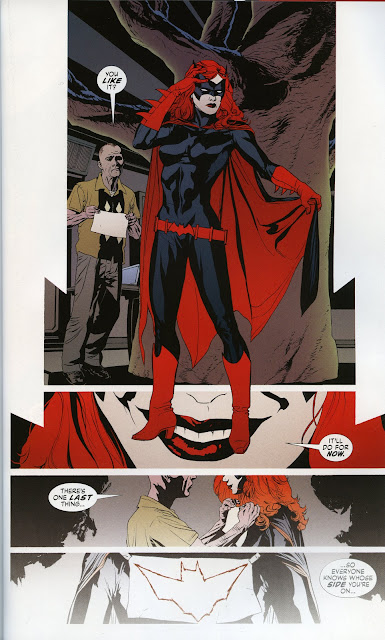 Granted, the costume of Andreyko and Sale's Manhunter from 2005 was also built around function, but not BY the heroine. 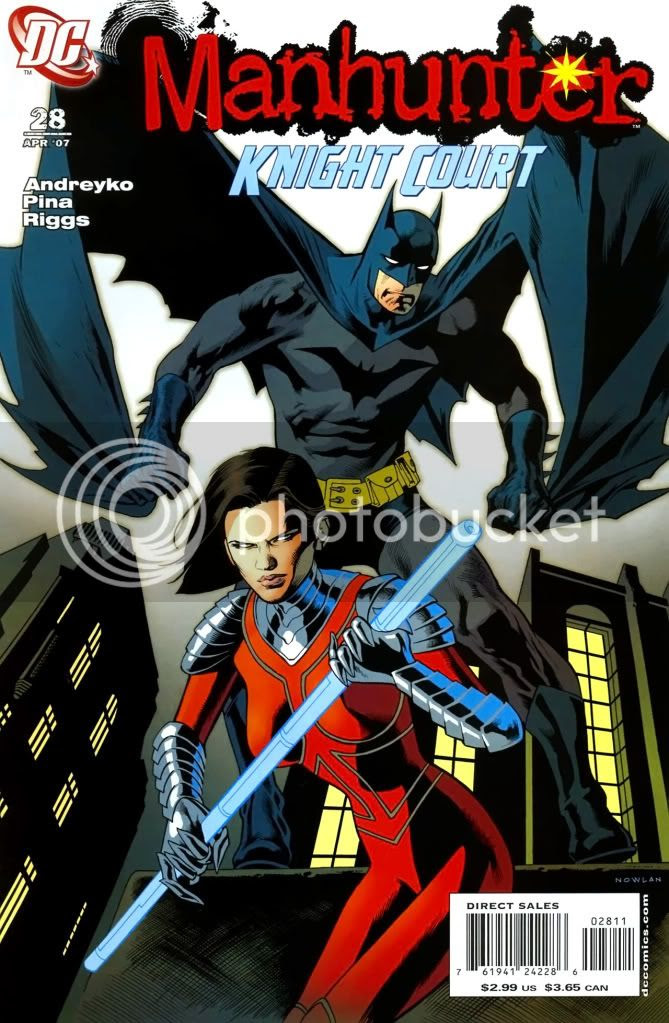