As promised, back to back posts to catch up!
Either you like Star Trek or you don't. I do. If you don't, lose the snarky attitude and let me have my fun.
The comics have been uneven over the years. The early Gold Key books were exciting, but had little to do with the series. The DC run with Friedman and Gordon Purcell was quite well handled, as was the Malibu run of Deep Space 9.
The current run takes over from the most recent film, which was an interesting way to reboot the whole ST universe and maintain respect for its roots. 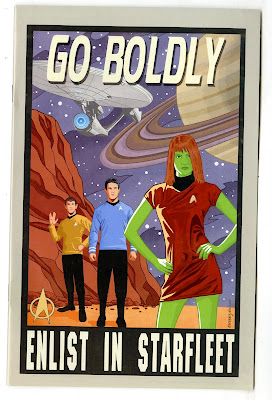 For those not familiar, time travel was used as a device to alter the history of Starfleet and the Federation, and to skew the dynamics of the characters, changing their relationship to one another.
I've seen the most recent Star Trek film three times, and liked it every time. It's engaging science fiction that holds onto the heart of its characters.
And despite the futuristic trappings, which are great fun, the characters are what it's all about.
Well, now they're the characters we know and love, but they're not. They respond to one another differently, and the events are-
but I'm jumping the phaser a bit.
What the current IDW comic is doing is beyond pretty cool. It's retelling the classic episodes of the original series, in the timeline of the aforementioned last film.
I'm very eager to see what happens if they make it to the Mirror, Mirror episode. Parallel universes in alternate timelines: that's the stuff of geekdom joy!
So far, they're taking two issues to adapt each episode. Good, good. Enough space to tell the story well, but not so much as to belabor it.
The art in these is sparse and clean, with solid pacing and characterizations that are on point. 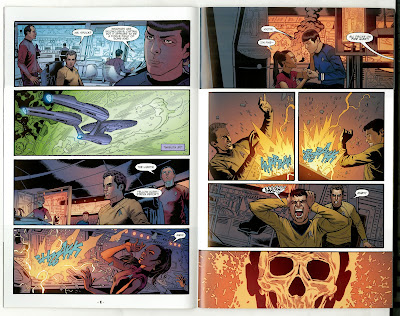 This spread, from the classic Gary Mitchell episode, hits all the right notes: glory shots of the ship, key shots of major characters, relationship building side elements (reinforcing the Uhura/Spock love interest from the film) and some exciting special effects.
The fact that these are different versions of familiar characters is made clear in the resolution of the crisis, handled very differently here. 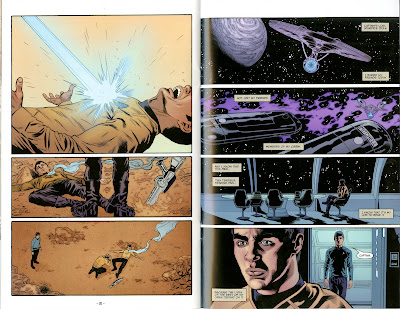 Rather than the original Kirk move of moralizing speeches followed by a deus ex machina of a convenient rock slide, Kirk recognizes the crisis and destroys the threat, then grieves his lost friend.
Nice.
Tomorrow: Noir with a very different bullet.
on January 15, 2012 No comments:

Net access remains problematic at home, so came in to work to get some stuff done. I'll post yesterday's entry and today's.
Up first, part of The New 52.
I've ignored most of the line for a while. I read the first Justice League, which struck me as a superhero hissy fit, and some of the early Superman stuff, which was well-done but didn't grab me.
Wonder Woman is well-written with decent art, but I loathe the latest revision of her origin.  I mean really? Instead of being the product of women's love of life, she's the result of an illicit union with Zeus? Really? How sad.
Batwoman, however, is something else. 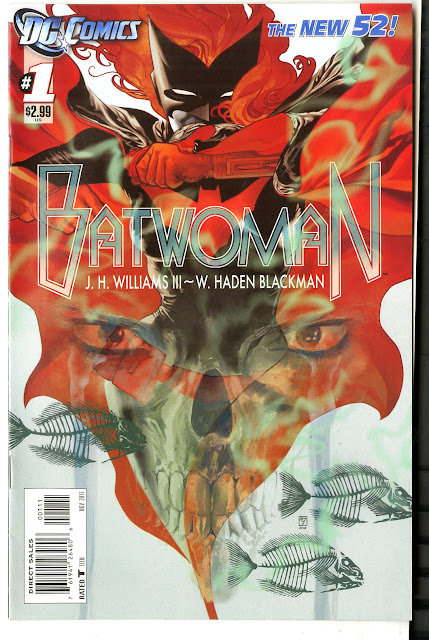 J.H. Williams III has taken over the writing from Greg Rucka, and the character has retained her integrity.
And the book remains visually lush, with layouts that remind me of Colan's work on Dr. Strange. 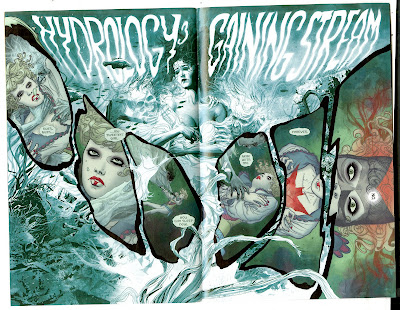 In terms of plotting, for the most part Williams & co. are playing up Kate Kane's military background over her lesbian identity. This has created some challenges, as she takes her protege, the former Flamebird, into training, using boot camp techniques.
This is effective to a point.
The over-eager "cadet" breaks training and assumes her old costume to take on the villain of the day unassisted.
The results are, as we say, less than satisfactory.
This is my one sore spot with this run. As Flamebird is hors de combat, Kate is engaged in an amorous tryst. As Williams does parallel cuts between the two scenes, the effect is quite jarring and, for my money, more than a bit distasteful. I didn't like it when Cher and Bob Hoskins used a similar device in the film Mermaids, and I don't much care for it here. It does make some tense strorytelling, but as Trina Robbins once said about Spawn: ick. 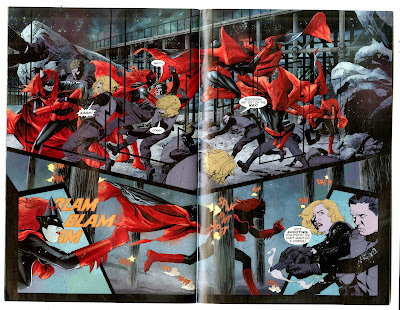 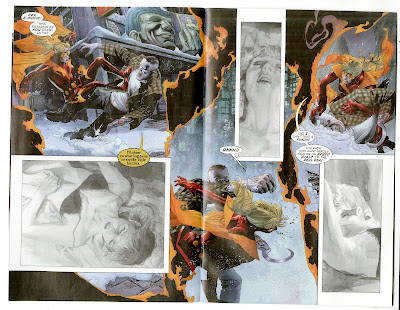 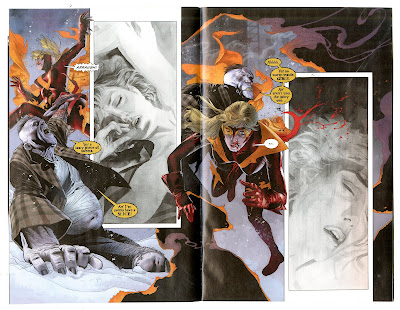 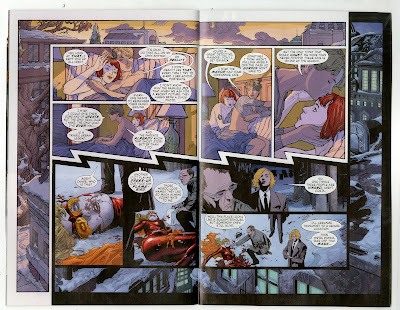 The denouement of the scene uses an FBI agent whose appearance, at least, will be familiar to readers of Alan Moore's Promethea, also lovingly rendered by Williams.
Kane remains a worthwhile character in a perceptive book, the problematic "refrigerator" scene notwithstanding. I haven't picked up the latest issue yet, so I'm a tad behind on plot developments.
Sidebar for readers of The New 52: DC has announced TPBs of all the titles' initial storylines, with the odd exception of Wonder Woman.
One last thing I like about Batwoman: the skull-faced FBI director is a very compelling character! 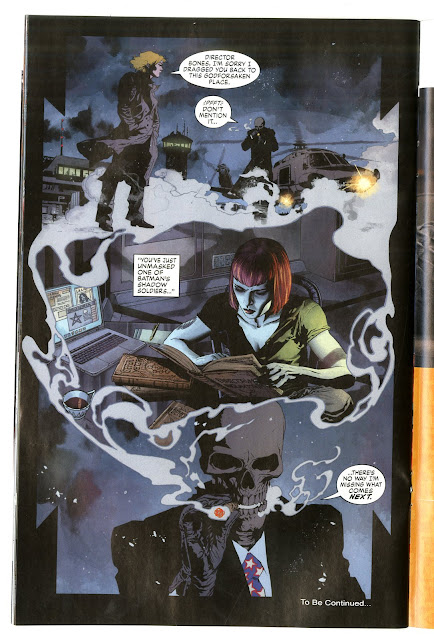 Next: something familiar, yet vaguely not so.
on January 15, 2012 No comments: