After midnight by two minutes, so technically Sunday. I have a very full day coming up, so thought I would post earlier rather than later.
When last we saw Delia and me, she had frozen over having her face touched.
Read on. 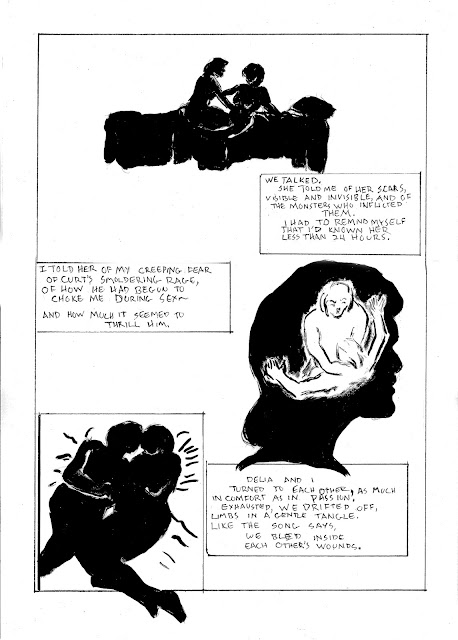 Silhouette. Yeah.
That's the way to go with this one.
I was inspired by a sex scene from Don McGregor and Marshall Rogers' Detectives Inc., which showed the couple in silhouette. It was a difficult sex scene in a darkened bedroom, and Rogers rendered fully realized backgrounds. For him, for that page, the right choice. For me, here, no.
Silhouette has two primary purposes here. It's universal, the shapes are relatable to most people. Also, the silhouette was prominently used in eras we now think of as rather placid and quaint, which makes their use to communicate such painful events rather jarring.
This page is also text  heavy, violating the axiom of "show, don't tell". This is of necessity, if I'm to continue to respect Delia's privacy. The stuff she went through was pretty bad, and as I've said in the past, it was HER stuff, not mine to tell. I'll tell that it happened, but not what it was. I hope that's not a cop-out, as we used to say.
I also wanted to communicate a bit more of Curt's rage. The drawing here is deliberately crude. The figures in the silhouette on the second tier are intended to communicate that ferocious energy, the stuff that started to really scare me.
Yeah, what I was doing then was dishonest and hypocritical. I'm not going to try to excuse that. I just want to fully communicate everything relevant that was happening then.  The events and conversations alluded to on this page are a condensation of several of my nights with her, but the core actions, along with those on the next page, did all happen in one night. As before, I suspect the real Delia would find my memory and interpretation of these events laughable.
I chose to hand letter here, knowing it would be uneven. As long as it's legible, the slightly jarring quality contributes to the disorientation I'm trying to communicate.
Materials for this page:
Canson Recycled Bristol
#4 lead and lead holder
Ames lettering guide!
Pro 4100 India Ink. I swear I'm throwing this bottle away. Even working in large flat areas, this was like painting with gum.
Synthetic brushes, #2, #4 and #2 scrub brush
Staedler tech markers, 0.5 and 0.8
Magic Rub erasers.
Next: we conclude (for now) the Delia interlude in the Curt story.
on July 09, 2017 No comments: