Two more after this one. 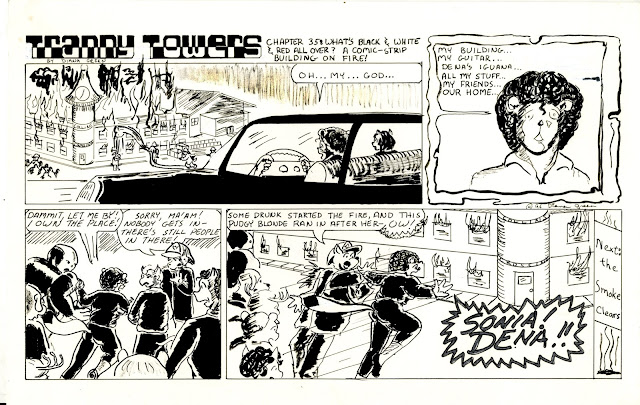 Notes:
Took the black and white motif of the chapter title and played with a typeface I liked to create the logo for this chapter.
It felt good to draw the building exterior again, not seen on-panel since the first strip. I went back to that strip, and to the Little Nemo page I took the basic design from, to be sure I got it right.
It looks a bit like Ricky standing frame right in Panel 3, but it's not intended to be him. Also, note Concrete being shoved aside by Sonia. He shows up again in the last panel.
Yeah, I screwed up and had Sonia shouting her own name instead of her ex-partner Trina's. I can either rationalize it by saying she was distraught (chalk it up to trauma), or I can fix it later, before going to press with the collection. I might just let it be as it is.
The "heat lines" in panel one frustrated me. I put them in, I took them out. It was printed without them, but I put them back for this presentation. I think I'll leave them in.
I'm quite fond of the broken border in Panel 2.
This whole page is about your life being torn apart by something so large it seems elemental (fire, water, earth, air). And she's been one of the two more together ones of our little funny animal trans cadre, so having it happen to her is much more dramatic/turbulent.
Ironically, as I was driving in to work yesterday, there was an SUV in flames at the intersection of Hennepin & Lake in Uptown Minneapolis. Smoke filled the cab, flames licked at the undercarriage of the once- white body. I was thinking about posting this strip right before I saw it.
Next week: after the fire...
on July 29, 2012 No comments: