After midnight, so technically Sunday. Here we go.
The next chapter: 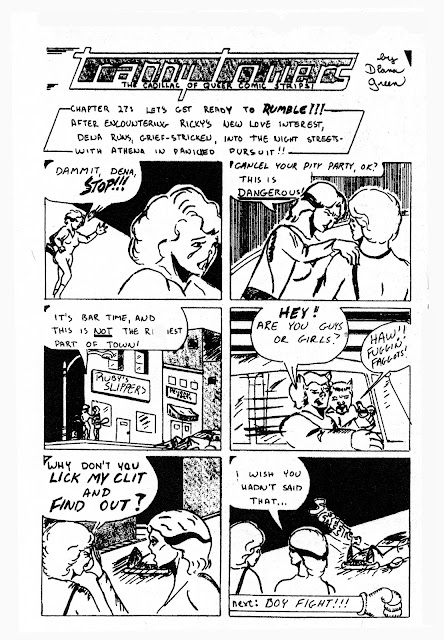 Another scan from a tearsheet. I need to rescan this from the original as well. The Moire' pattern on the title comes from Zipatone that was not properly put into the printer's file on their end- I gave them clean copy- and it reappears in the environments in panels three and five.
So many plot devices are, if not cliche', standards in queer and TS comics: bashing, being outed, suicide. I managed to include most of them in Tranny Towers, but I hope there was a freshness to them, or at least my own spin.
Cutesy notes: the business named Ruby's Slippers is a pretty obvious OZ reference, also an indirect nod to my home town of Grand Rapids, MN, from whence hails Judy Garland. The neighboring business, Pelican Parts, is just a bit of silliness.
The passenger in the threatening vehicle is inspired by a former assistant manager from my movie theater days, who screamed homophobic and transphobic insults and threats at me so loud that the Rocky Horror audience inside the theater was silenced. Of course, he had just been fired for doing a lousy job, but still...
The extreme tailfins on the car are obviously 1950s inspired.
Overall, I think this was a pretty successful page.
Next: Chapter 28.
on June 03, 2012 No comments: