When I was a kid, one of the comics I used to defend my reading habits was Thor. I thought the mythic overtones, coupled with the faux-Shakespearean High English lent the book sufficient legitimacy that, as Thor might say, none would dare question its veracity!
At San Diego Comic-Con this year, they ran a trailer for the upcoming THOR film. Naturally (and I suspect possibly deliberately) it leaked out afterward.
As embedding appears to be disabled, please use the live link above for as long as it lasts!

In hindsight, as much fun as the Lee/Kirby Thor was, it really wasn't all that well-written. There was a sameness to the soap opera aspects, but Kirby's art was at its peak on this book, at least for me.

In the last couple years, the writing took a turn for the better under the auspices of J. Micheal Straczynski (who is no longer on the book, having jumped ship to DC, at least for now). His take on Thor reintroduced the book's majesty, while retaining its wit. Usually, when a writer is "witty" on a comic, it's at the expense of the characters. Not so here. JMS is capable of balancing humor and respect for his subject matter. That's great. Snark is nearly worthless. If you dont' respect the subject you're writing about, how can you expect that your readers will? 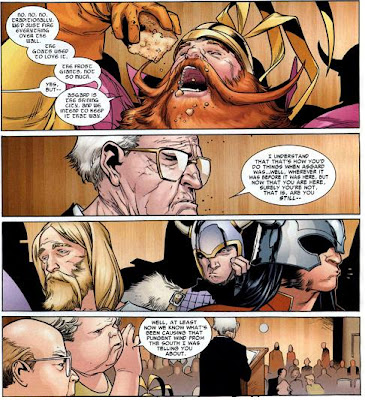 As for the trailer, Thor's look is based on the JMS storyline. It works. I have a minor problem with the early shots of Asgard. These are Norse gods. Their  home should look like it's carved of cold stone (as it does later on after Loki assumes power), not gleaming polished CG metal.
I shy away from many superhero comics to film adaptations these days. I'm not seeing Iron Man II until it hits Netflix. And as much as I like M. Night's work, the clips my friends showed me from The Last Airbender were quite painful.
But this looks promising.
on July 29, 2010 3 comments: