And to the wire...
three left after this one. 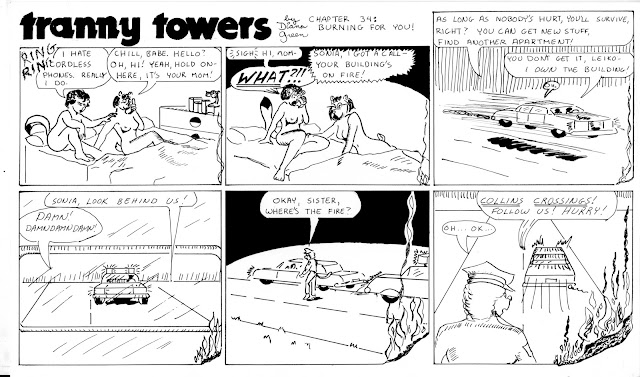 Pretty simple this time around.
Editorial had told me the strip was probably going to be cancelled, and I was looking at wrapping up the storyline. I was also very careful to match the strip layout to the new horizontal layout they had changed the strip to (without bothering to tell me in advance), and included a semi-bitchy note to the art director asking if they would please inform me in advance of necessary changes and give me a chance to make them myself, thank you very much.
Very simple strip this time out, emphasis on the action. Leiko's bedroom is consistent with the previous strip- since I had so much fun planning the layout of the bedroom, it seemed wrong to use it only the one time!
The revelation that Sonia owns the building was a plot device originally intended for a future story line.
Needless to say, I took the cancellation hard. Still, I felt a bit childish going with this "scorched Earth" plot, and it's a bit of a deus ex Machina, but it's fast and irrevocable. Fire's like that.
I don't remember where I got the visual device of the panels actually burning, but I do know it's not original to this strip. I had big fun lighting small scraps of paper and trying to photograph them for reference before the hot ashes floated away.
The title comes from the Blue Oyster Cult song, which I actually prefer to their big hit Don't Fear the Reaper.
Next: the blacks get heavier as we go to the burning building.
on July 22, 2012 No comments: