Time has not been my friend this holiday season! So rather than do my usual one book a day post,, I'm posting the 2015 Best Comics in three batches. Here's the first batch.
15. The Undertaking of Lily Chen 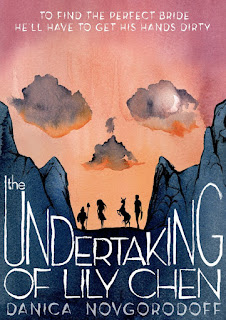 This was quite a surprise, so much so that I'm re-reading it half a year after the initial reading. Danica Novgorodoff's tale of a morbid, romantic quest delights and enthralls on so many levels. Here's a quote from the Amazon blurb on this one: "In The Undertaking of Lily Chen, Deshi, a hapless young man living in northern China, is suddenly expelled from ordinary life when his brother dies in an accident. Holding Deshi responsible for his brother's death, his parents send him on a mission to acquire a corpse bride to accompany his brother into the afterlife, in accordance with an ancient Chinese tradition that has many modern adherents. Eligible dead girls are in short supply, however. When Deshi falls into company with a young--and single--woman named Lily, he sees a solution to his problems. The only hitch is that willful, tart-tongued Lily is still very much alive. As Deshi and Lily adventure through a breathtaking mountain landscape, meeting a host of eccentric characters and dangerous adversaries along the way, Deshi just can't decide whether to kiss the girl or to kill her." 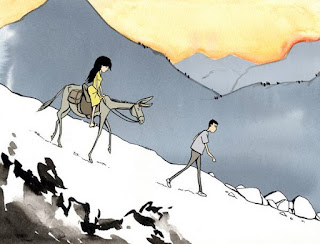 I haven't read  Novgorodoff's other graphic work yet, but Refresh, Refresh sounds promising. Her art is simple bordering on crude in spots, but incorporates watercolor and drybrush and evokes sumi-e in spots.  Her photography and other illustration, which can be seen at her web site, reveal a great combination of control and passion. Her teaching and freelance career are clearly keeping her quite busy, but not so busy that there isn't another book on the horizon, I hope! 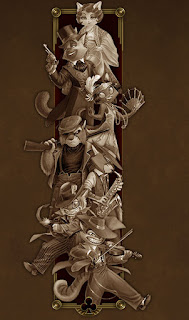 Really, this one falls more into the Shameful Omission category than it does into New Work. Tracy Butler has been plugging along at Lackadaisy Cats (sometimes just called Lackadaisy), an online strip about cats during Prohibition in St. Louis, MO, since 2008. She does 2 strips a month on average, and recently took the plunge to go full time on the strip, leaving her gig with a gaming company behind for the caprices of the free market and Patreon funding.
The characters have a perfect verbal and visual economy. They never feel the need to make long-winded speeches! No illustrated radio here, these characters know who they are, and even when they're idling around, the strip is driven by movement rather than text.
And the art just shines. A lovely controlled palette,  innovative yet perfectly legible layouts and strategically paced text, all of which move the stories along nicely.
And damn, it's pretty.
A tightly controlled palette, used very effectively, is a visual hallmark of the strip. Although it's not complex, I find myself looking at her art and thinking, "how does she DO that?"
There's been one collection so far, out in hardcover and TPB.  The fans of this wonderful strip have been much too quiet about it. How about it, folks? Let's sing the praises of this one! 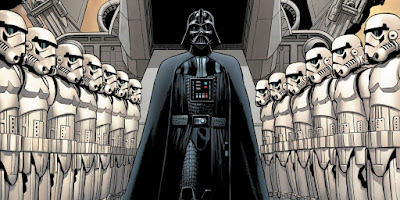 Again, this one is a bit of a no-brainer. While I had some reservations about Marvel taking over the Star Wars franchise from Dark Horse, it was inevitable due to Disney now owning both Marvel and Lucasfilm. And I'm tickeld to say it's worked out well! Dark Horse has done some interesting work with Star Wars over the years, notably the Dark Empire trilogy, but there's been so much of it that it's been rather hit-and-miss. Marvel wisely chose to delve into a very specific time frame for its books, right after Episode IV, dealing with Vader's awakening to Luke's true identity. 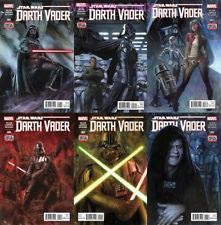 Marvel has been glutting the market with titles, including miniseries of Lando and Princess Leia, a current Chewbacca title, the Star Wars book, a Darth Vader book, the Shattered Empire miniseries, Kanan, the Last Padawan (a very strong book not in current comics continuity), Obi-Wan and Anakin (obviously outside the current continuity), and the Vader Down one-shot. Ordinarily I'd balk at this many titles. But between my admiration for Star Wars and the consistently high quality of this work, I've been lapping these up like a sponge cake by a saucer of brandy. Jason Aaron's writing is spot on, no mean feat for storylines and characters that have been lovingly dissected for decades. John Cassady's art continues the precision and passion he bought to Planetary and Astonishing X-Men. Obviously, there are other creative teams involved in this spate of books, but this is the team responsible for the initial launch, and it remains the strongest in my view. 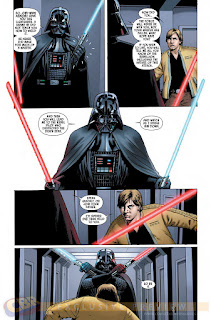 I may be the only person in the US who has not yet seen Episode VII, but as a veteran of the series from the initial launch of Episode IV on, it's definitely on my radar for this weekend. In the interim, I'll be putting my issues of these titles in different order and reading them again. And again. Here's a suggested reading order from a friend at the Comic Book Binding boards.
Star Wars 1-3
Darth Vader 1
SW 4
DV 2-4
SW 5-6
DV 5-6
SW 7
DV 7
SW 8
DV 8

Quality reprints of classic comics, both standards and lost gems, routinely make my "best of" lists. 2015 was my year to go nuts on Kickstarter, backing 31 projects! The first project I backed was one of the best, spotlighting a lost Canadian comic hero, Brok Windsor. This work by Jon Staples is so many things- frontier adventure, fantasy, SF with a tinge of giant creature horror, and a delight to discover! This 1940s gem was rediscovered by Hope Nicholson, who gave us the wonderful Nelvana of the Northern Lights anthology a couple years ago. Though painstakingly restored, the detailed notes and background don't prevent enjoyment of this work. I was particularly impressed with Staples' fluid page layouts, as seen here. 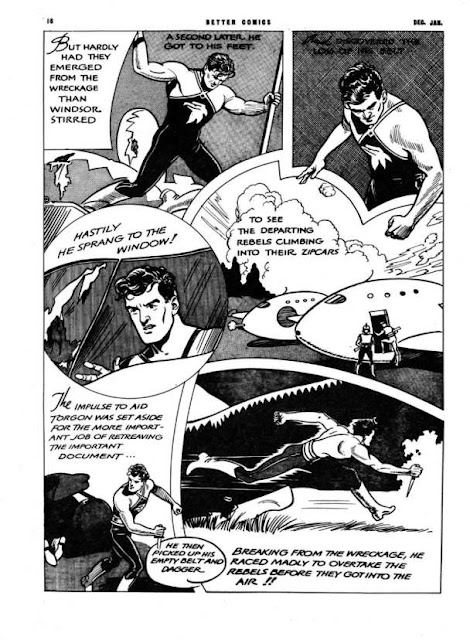 I love seeing curvilinear panels, alternating high shots with close-ups followed by long shots, and switching from an aerial to a lateral perspective on the bottom tier! Many pages in this collection show this level of design innovation, but none sacrifice clean storytelling to the layouts.
The collection includes a newly drawn story from a recently discovered script, which will be very useful next time I teach Comic Book Writing.
I opted for the slipcased edition of this. See shots below. 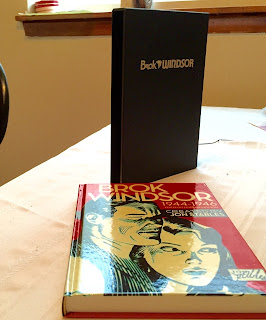 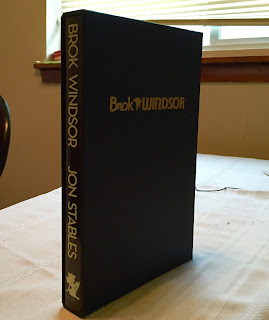 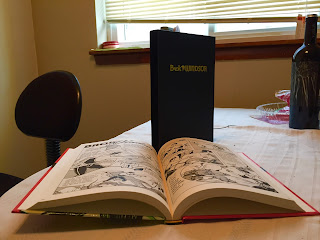 11. Ms. Marvel/Captain Marvel
Again, these books began before 2015. But while they've always been strong, they both hit their stride this year. Ms. Marvel is a wonderful vehicle for empathy for Muslims from us ignorant non-Muslims, as well a being a slice of teen life that does NOT wallow in the usual cliches. Captain Marvel is about a woman coming into her own, finding her place in the scope of the Uinverse and embracing her power. Oh, and flying. Captain Marvel is all about flying. 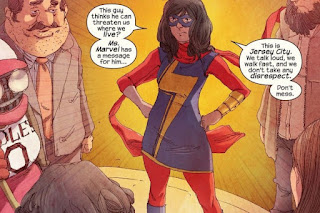 Ms. Marvel has another thing going for it. The book has that populist sensibility I love so. Whether our heroine is discussing the challenges of love with her hot dog vendor or working with her classmates (and with the help of Loki!) to keep them safe during an apocalyptic event, the book has the Capra/everyman quality I admire in Eisner's Spirit, 'mazing man, and Fraction's Hawkeye. 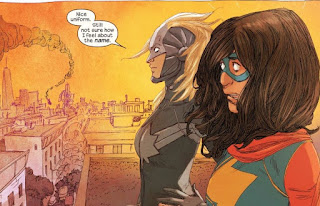 The rooftop encounter between Captain Marvel and Ms. Marvel is perfect. The Captain reinforces what it means to be a hero, and that even heroes don't get to abandon their fears. They just can't let them stop them.
I'm uncertain about the future of these titles, given that Marvel is planning yet another cataclysmic universe shaping event. Enough already. Just tell us good stories and stop getting in your own way.
Then again, I've been saying that for decades, and they just keep going.
Ah well. The books are still there for me, company politics aside.
Next: Best of 2015, numbers 10 - 6.
on January 01, 2016 No comments: