Most of this year's list to date is material that revisits past glories of comics in new ways.
While I respect this material a great deal, there's still plenty of noteworthy new work.
Case in point: Cow Boy.

This is one of the funniest and saddest books I've read in years.
This is the story of a boy roaming the West trying to bring a bad man to justice. 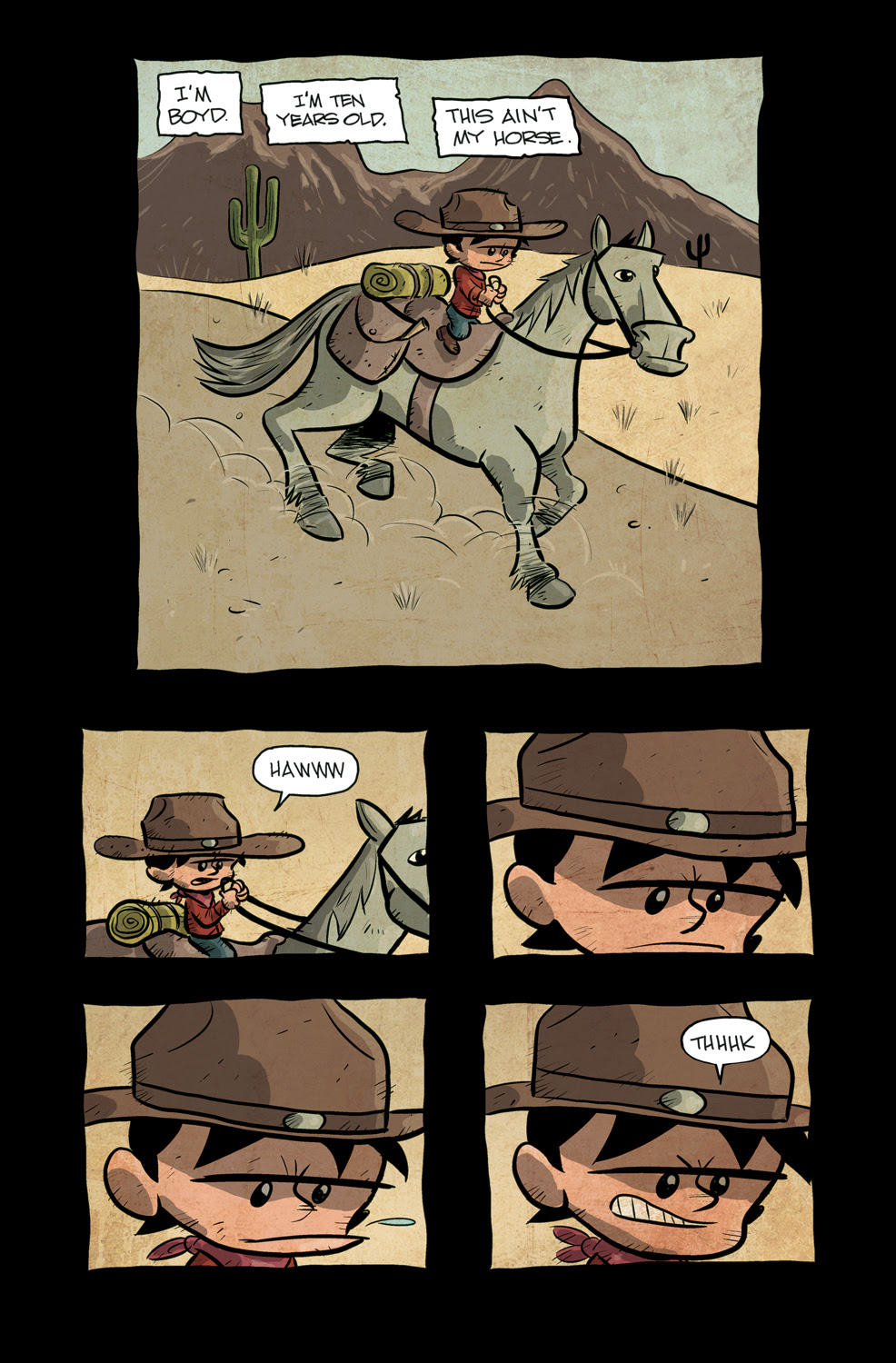 Problem is, the bad man is his father. And he rides grim, alone and lonely, with a child's vision of the West tempered by the perceptions of the adults he meets along the way. 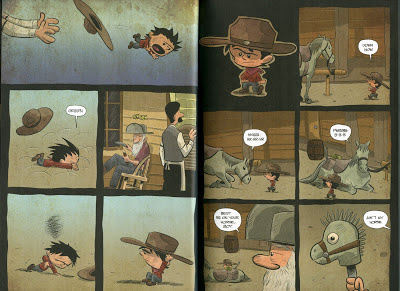 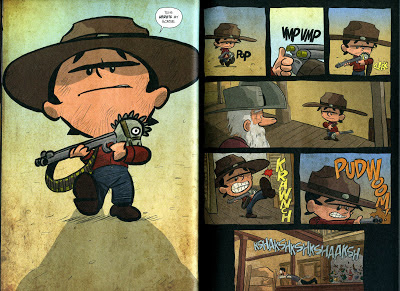 And, of course, he finds, captures, and confronts the father. 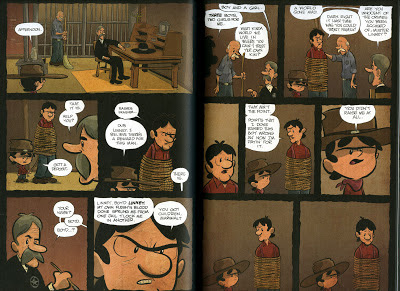 The book confronts the challenges of parent/child relationships in a way that's all too real, but takes nothing away from the child's perception. It also doesn't become a therapy session. It's just honest, and you  know I'm a fan of honest.
The creative team of Nate Cosby (Jim Henson's The Storyteller) and Chris Eliopoulos (Pet Avengers, Franklin Richards) is well versed in the fantastic comic involving children or children's material.
I'm a sucker for profound emotions, clearly expressed without pelting the reader with bags of saccharine or venom.
Arachia did their usual beautiful job on the production of this book. As of this writing, there is no TPB edition, and while the price tag of $19.95 is hardly outrageous, it might do the disservice of keeping it out of the hands of some younger readers, which would be a real shame.
Cow Boy plays on many Western tropes- it reads as part Spaghetti Western, part John Ford, and has hints of the dying West that are echoed in Jarmsuch's Dead Man. But none of this is so overbearing as to make the story too unrelenting for kids or impressionable so-called grownups.
This also echoes Don McGregor and Gene Colan's Ragamuffins strip from Eclipse in its attempt to understand the feelings of a child, though not quite so pedantic.

In looking at this work, be mindful that it was printed and colored from Colan's pencils. So if it looks a bit soft, that's why. A flawed experiment by today's standards, but remarkable for the pre-digital age.
Of course, I can't read any comic that deals with the world from a child's point of view without recalling one of my all-time favorites: Sheldon Mayer's Sugar and Spike!
A refresher: Sugar & Spike are neighboring babies who speak baby language and have their own view of the world. If this sounds like Rugrats, it should. The animation studio Klasky-Csupo freely stole the idea from Sugar & Spike.
In the cover shown below, note the presence of Grandpa Plumm. All babies, regardless of species, speak baby talk. And Grandpa, being in his second childhood, communicates fluently in baby talk, but adults see this as senility. Also, his cowboy regalia is on point with today's theme! 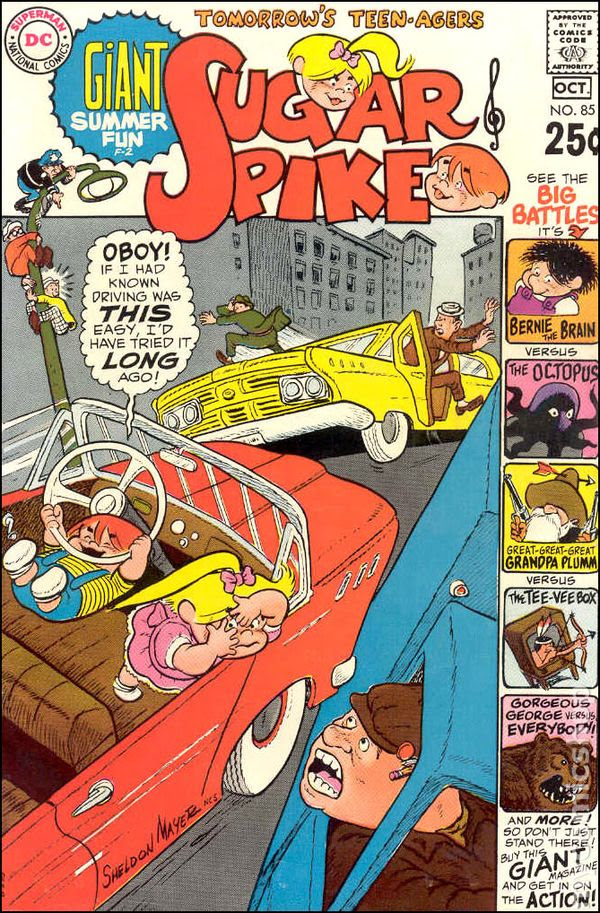 Ahem.
Back to our book.
There are a couple framing stories in Cow Boy, unrelated other than by tone. It's reasonable to assume they're set in the same, or a similar, world.
One of these, depicted below,  deals with a lady gunslinger and her penguin sidekick, or is it the other way around? 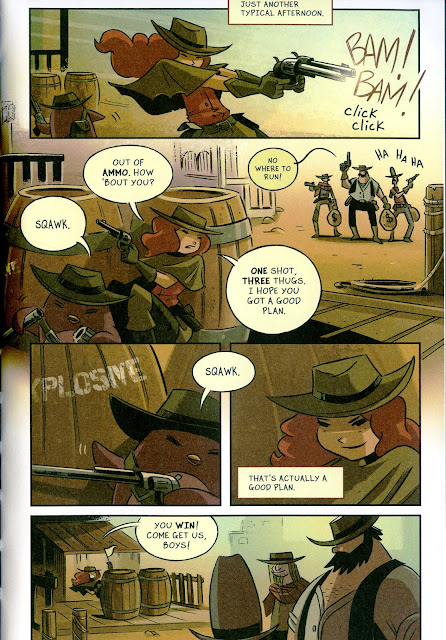 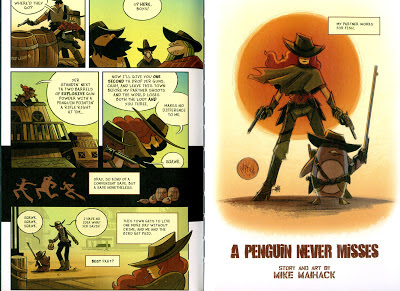 This is the work of Mike Maihack, whose other delightful work can be found at this link.
This is a style I've often wondered about cultivating- not this specifically, because it's Mike's but something looser. My own work is so, ahem, informal, that I sometimes think forcing it to bend to  taut precision works to its, and my, determent.
Hm. I guess I just need to let go a bit more.
Food for thought, but Cow Boy will certainly inspire me, and any other creators who are still open to the paradox of insightful innocence, to consider it.
Tomorrow: put on your masks as we jump to another planet for Best of 2012, No. 4.