Here we go again with the annual series of the best comics of the year. As is my way, I will post one a day rather than posting the whole list at once, as most do.
Our opening entry is a bit of a curiosity. 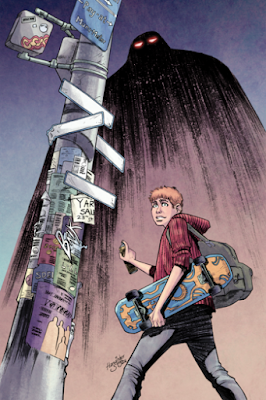 Mike Benson and Adam Glass share the writing credits on the Oni Press series BRIK. The premise is innovative but direct. From the Comixology solicitation: "Drew is a bullied kid in the Yonkers neighborhood of New York City whose family faces encroaching violence from Russian gangsters. Before his beloved grandfather is killed in an attempt to muscle the family out of the neighborhood, he’s able to pass down to Drew the story of a mysterious but dangerous protector who helped their people during other troubled times. When Drew finds his grandfather kept the secret to creating a golem, is it worth the risk to summon this supernatural avenger to take on the all-too-human darkness swallowing his world? An urban fantasy tale of power and morality from writers Adam Glass (Suicide Squad, TV's Supernatural) & Mike Benson (Deadpool, Moon Knight), amazing new illustrator Harwinder Singh, and colorist Gonzalo Duarte (The Bunker, Big Trouble in Little China)!"
All that said, what's working here?
The characters are empathetic rather than sympathetic. This is good. Empathetic characters are much more plausible and interesting than sympathetic ones. There's even a bit of an attempt to make the bullies more fleshed out characters. 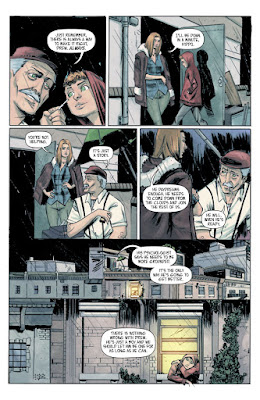 Many have commented on parallels to early Spider-Man. A kid stumbles into abilities that could end his torment, but said abilities prove to be as much trouble as the initial problem.
However, that's a little too easy. This story is also a chance for young Drew to embrace his Jewish heritage. I would have liked to see more of the grandfather in this respect. His function was primarily to carry the spear, as it were, tell his heir the legend and then move on. This is symptomatic of a larger problem in contemporary comics. Writers don't know how to write outside their age boxes. More on that in later installments.
Both writers here are seasoned professionals. Glass's run on Suicide Squad was strong, but not up to the high standard set by John Ostrander or Gail Simone. In contrast, I found Benson's writing on Luke Cage:Noir to be quite compelling. In BRIK, the story moves along briskly but still leaves space for meditations and introspection.
Harwidner Singh's art is quirky. He tends to flatten faces a bit, though that tendency recedes as the series continues. He composes images well, with a deliberate eye towards advancing the story.
Bottom line: BRIK is a good book, at rare times a great book. Drew's discovery of Brik's abilities has elements of pure bliss, reminiscent of Atreyu riding the Dragon in The Neverending Story. The neighborhood feels a  bit cliched at times, but for the most part, it works.
I'll be watching for more work from this team. Also, it's nice to ONI Press hanging in there!
Next: Best of 2016, no. 15, an agonizing work.
on December 31, 2016 No comments: