Once more, here we go! Last time around for this particular Speedy Recovery book!
The Speedy story is done, at least as far as posting it. But there are some tidbits that were included in the first printing of the comic that I wanted to share here. 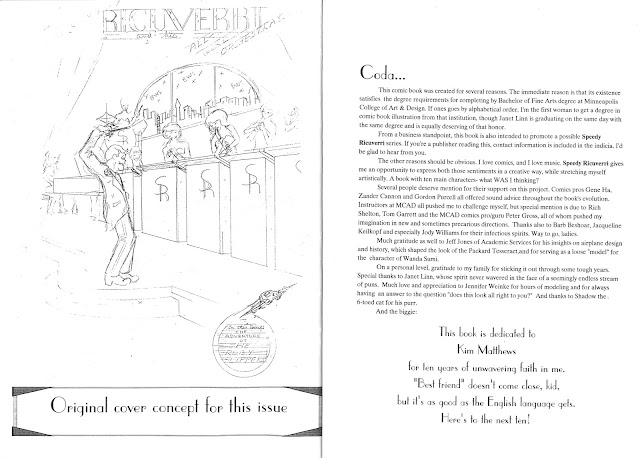 Here's the original idea for the front  cover, and the usual somewhat self-congratulatory afterword page. I'll let the text speak for itself for better or worse, rather than second guess copy I wrote 25 years ago(!).
I do like the original cover plan, in some ways better than the final. I would have had to redraw the car/plane to match the final version inside the book. But even though this version is more dynamic, it served as the basis for the last story page (see previous blog post). 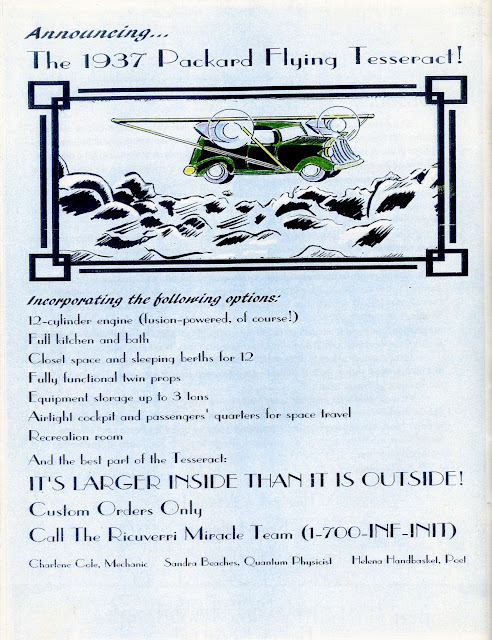 And here's the back cover- an ad for the Packard Tesseract! I've been fascinated with Packards ever since I saw Harlan Ellison sitting in his on an episode of the old Anti-Gravity Room, a fun SF Channel series that was mostly young geeks sitting and talking comics. Clearly, part of the inspiration for the Packard was the TARDIS. Bear in mind that at this point in time, the Sylvester McCoy series was just ending in the UK and was only being sporadically broadcast on PBS in the states, so it was a much less known commodity then than it is today.
Process: This was printed out on colored paper, with the illustration down directly on the paper with colored pencil and markers.The cheesy frame on the illustration is just Photoshop stock. The Packard Tesseract is a great idea. I love the conceit that you need a mechanic, a quantum physicist and a poet to build one!
And I did get some reviews of the completed book. I got a kind note from Howard Cruse, who had also liked the Tranny Towers mockup I put together for a Xeric Grant (didn't win- much sadness!), and a brief note from Trina Robbins, who didn't much care for it. However, I'm pleased to report that we developed a friendship in later years.
And I got a postcard from Neil Gaiman.
This may have been one of the last such reviews Neil did. His career was entering a MUCH larger phase, and shortly after this, he stopped reviewing everything that was handed to him (perfectly understandable). But I cherish this postcard (with Charles Vess Stardust art, no less!) and the kind words Neil had for my work at the time.

I find Neil's handwriting quite legible, but just in case you can't make it out, here's what it says:
"Hi Diana-
Thanks for "Speedy"- I enjoyed it (especially the pun names- some were worthy of Will Eisner)- my only real problem was that it seemed uncertain what it was- a parody, a pastiche, a retro-story, a superhero thing, or what, and the storytelling seemed to lurch a bit: right now they aren't yet people- you have to believe in them too.
Congrats on the degree!
Looking forward to the next Speedy Ricuvveri-
love
Neil Gaiman"
A generous and fair review, I think.
(That's a very old address, by the way. Don't write me; I'm not there.)
A former department chair who became a friend, Tom Haakenson, once said you should never go back. But I don't think that applies here. I do like these characters, I think there fun and exciting, and I need to do more stories featuring them. I just need to take Neil's advice, and make the execution live up to the promise. These are good characters, and they deserve another day on the page.
Next: we'll see.... back to an older story, work on something new... I'm rather enjoying this getting things completely done stuff. I'll see if I can keep that horse galloping!
on August 30, 2015 No comments: