I'm coming around on the Lichentstein issue.
Two days ago, there was a Christie's auction. A Lichenstein painting, based on (some would say stolen from) a comic panel, set a record price.


Lichetnstein irritates the beejezus out of me. His work dissects comic art and parades pieces of the cadaver. While he had every right to paint what he chose, I have a right to my view of his work too.
And my view is that Roy was working with no respect for his source material, yet taking full advantage of said material.
I get the theory behind it. He's made the paintings about period-specific production techniques, a sort of deconstruction/reconstruction.
Strangely, people who object to the inclusion of once-living tissue and creatures in art have no such objections to the dissection of art itself.
But the fact that he never once acknowledged his sources beyond the vague "comic book panels" speaks directly to a dismissive attitude towards the source material. David Barsalou has done a scathing one-to-one comparison of Lichtenstien's paintings with his "source works".
Art Speigleman said, "I have all sorts of issues with the idea that a Lichtenstein painting of a comic book panel is art but the original comic panel it draws on is not considered art. I hate that whole attitude and way of looking at this stuff. Lichtenstein did for comics what Warhol did for Campbell's Soup - it had nothing to do with comics. It had to do with exploiting the form without any of the content."
Speigleman's response was also represented in his work, specifically this piece, High Art Lowdown, done in response to the tepid treatment of comics at MoMA's High Art/Low Art exhibition.

I modified my views a bit when I read about Roy attending a National Cartoonist's Society meeting in 1964.
Mort Walker, creator of Hi and Lois and of Lois's nephew Beetle Bailey, offered a remarkably kind memory of that experience. Walker is a keen observer of comic history, and the seeming simplicity of his work belies his profound understanding of the mechanics of the medium of comics.
As such, I respect his perspective a great deal. 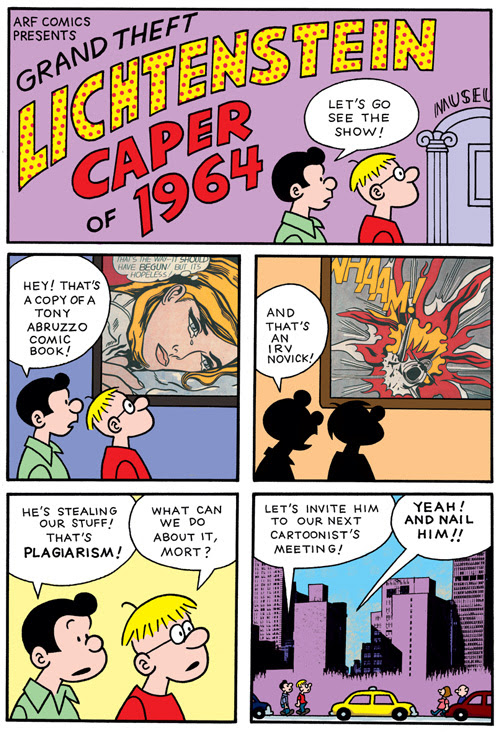 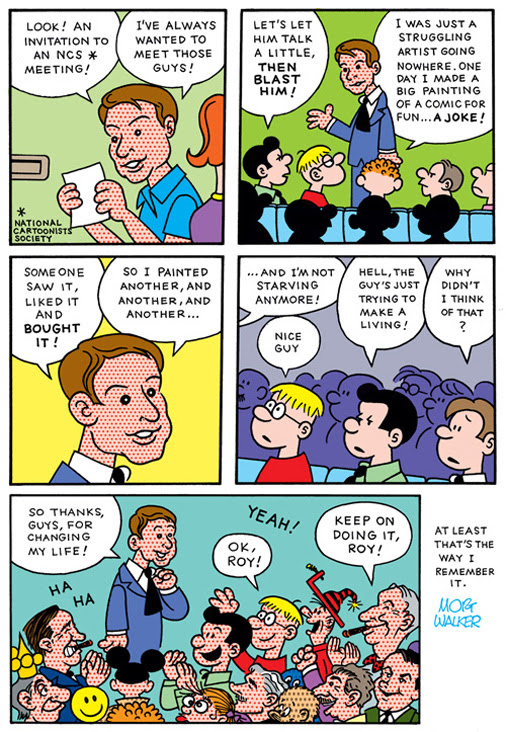 "Thanks for saving my life."
Okay, then. But you still felt no need to give back to the art form that gave you so much, did you, Roy? You could have at least given proper credit to the creators whose panels you, ahem, adapted.
My friends from other parts of the art world take me to task for this attitude. They contend that I'm rather thin-skinned when it comes to comics being taken seriously.
Maybe so.
But until I see an Alex Toth original, or a Hugo Pratt, scoring this kind of dough and being taken seriously by the "legitimate" art world, until that work is shown in museums alongside the Lichtenstein works, I don't think comic art has yet attained its proper position in the art world.
I'll grant we're closer than we ever have been, but there's still work to be done!
on November 12, 2010 4 comments: