Finally found and scanned all those originals! Huzzah!
I will post corrected scans later this week. It was good reading the story as one unit, and I think my regular readers, if such there be, deserve that opportunity as well.
Right now, let's get to the next chapter. 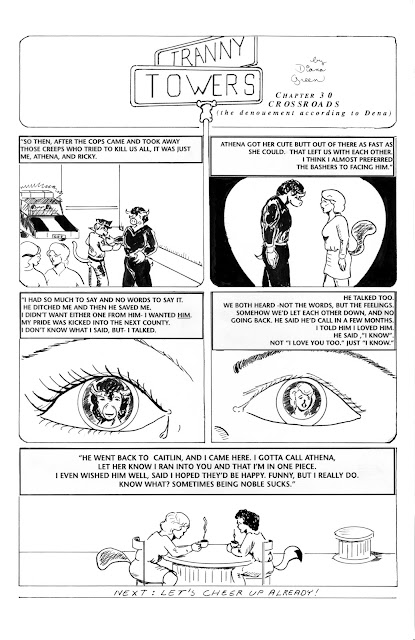 I really like this one. The backgrounds could use more detail (or some), but the emotional content is there, and I think it's carried by the illustrative choices.
The Shot-Reverse Shot in Tier 2, tight on the eyes, is intended to serve as an anchor to the character's emotions- eyes as windows to the soul and all that. They're seeing the best in each other as they say goodbye.
I don't think I swiped the street sign motif from anyone in particular(possibly some Eisner reference in the back of my head? Not sure), but it's hardly a new concept, and the idea of of the street sign melding with the borders references both Vaughn Bode's use of panel content as border element and Paul Chadwick's more subtle use of the same technique in the Concrete storyline Fragile Creature.

This page serves to resolve a storyline, and as often happens, the resolution implies the dawning of a new day for Dena's character. Originally the flighty pre-op obsessed with looks, clothes, makeup, estrogen and men, she's now had a taste of the - well, not exactly DOWN, but more real, side of the life sh'es accepted as her own.
Simply put, she got hurt a lot and grew up a little. Well, maybe more than a little.
Nobody behaved nobly in this scenario. Both the principals were at fault in different ways. But this gave them both the chance to see each other, and themselves, for who they really were, both good and bad.
In other terms, this is what screenwriter Robert McGee talks of in his lectures on developing character. Both principals have undergone an absolute and irrevocable value shift. They can no longer be who they were before.
Like most such stories, this one is based on a personal experience that I took very badly at the time, but have come to see with a bit more kindness, for myself and for the man involved. It's not our story note for note, but there's enough of our (to torture the metaphor) personal symphony in the storyline that the themes have similar cadences.
And let's face trans and queer folk hardly have a monopoly on lost love, betrayal and their aftermath. It is a fairly universal theme.
Reading over these has made me eager to see the work in a collected volume. I'm developing some old material that was never complete for inclusion to round out the book, and I'm tossing around either doing it as POD or as a Kickstarter.
Tough call, though. I've not forgotten about my two other works in progress, one of which will have some work included in the Fall 2012 MCAD Faculty Art Show.
The work takes the time it takes. It's just a question of doing it.
Next: the final Tranny Towers storyline begins.