Finally.
I've been wrestling with this page for a month now.
Here's why. Take a look at the page rough. 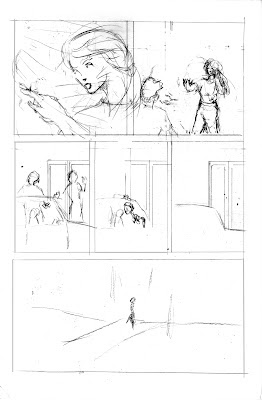 Working up the rough, I was never happy with the first panel. I wanted the page to move through a lot of action very quickly, beginning with the moment to which this has been building.
I tried the slap from several angles and was happy with none. It just didn't work!
Her reaction was never quite powerful enough, there was no indication of the emotions of the aggressor. It was all too static.
But I didn't realize that.
I got hung up on getting the physical dynamics of the slap right.
I like looking to other artists and comic creators for suggestion and inspiration. It's an excuse to use my collection as a swipe file.
But there are very few slaps in comics, much to my surprise.
I looked at some 40s crime stuff, my copy of Romance Without Tears, and some superhero stuff. Lots of slugfests, even some planets being tossed about, but not slaps.
In frustration, I started re-reading Strangers in Paradise to take my mind off the problem.
And there it was.
But I still couldn't make it quite work.
That's when I  realized, as my Dad used to say, I was putting the ac-CENT on the wrong syl-LA-ble.
The crucial thing wasn't the technical accuracy of the slap, but the slap itself.
It's a big moment, and I had it crammed into a corner.
So worrying less about detail, I turned the Bristol over and drew the final. 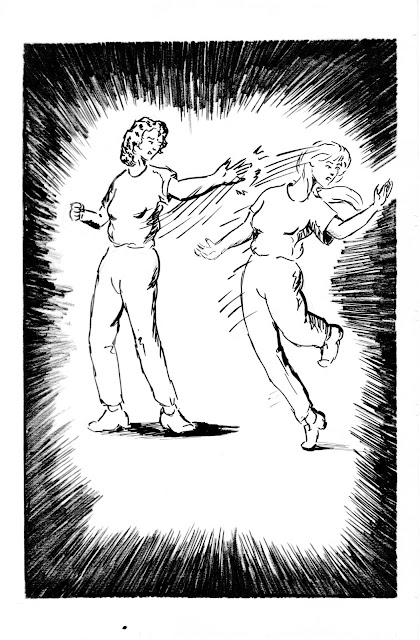 Better. Not perfect, but better.
The energy comes through, and the poses and expressions are, if not spot on, plausible. As David Chelsea observed in his book on perspective in comic art, it gives a sense of where things are, physically and emotionally.
This was an emotionally difficult page, but since it's been almost two decades since I endured something similar, it was a tad easier this time than it was as a story element in an earlier Tranny Towers strip.
This is also the first full splash page I've used in this story. Since it's such a key moment, I think that's apropos.
My classes end Tuesday night, my final grades are due at the Records office next Monday. I have  a bit more time to work on my storytelling, though the deadline for the next volume of the Comic Encyclopedia looms large.
Long and short, new art next week.
And as I tell my students, thank you for your time and indulgence.
on May 06, 2012 No comments: