Review: Gentle Giant: The Power and the Glory 5.1 Remix

Considering the vast role music has played in my life, I've usually had sound systems that range from adequate to slipshod. Part of this is my being a technophobe. Part of it is me being miserly about big ticket investments (to this day, I put off buying shoes as long as I can due to the cost of decent ones!). Another factor is that I can't always tell the difference between the moderately priced systems and the high-end stuff. 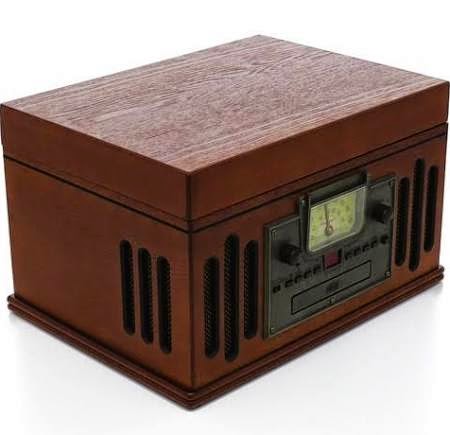 Currently I'm primarily using a Crosley combined turntable and CD player. I like the look of it and the sound serves. I can burn CDs from LPs. It doesn't kick out the jams the way some of my past systems have, but living in a modest space in a garden apartment, having a compact unit with decent sound is okay.
So in light of that, what business do I have reviewing a 5.1 mix of any album, let alone one as iconic as Gentle Giant's The Power and the Glory?
Well, it speaks to the quality of the work that even on this modest system, the difference is noticeable and remarkable. The instruments are distinct, yet the work retains its cohesion. This doesn't come across as five masters playing their instruments as much as five masters playing TOGETHER. There are some subtle changes, extended intros and exits on certain numbers, and the added instrumental track of Aspirations (a perennial favorite) just shines. This album, which I've heard countless times and revered for over 30+ years, has taken on new life for me. The intertwining vocal lines on No God's A Man are clear and precise like never before, but none of the magic of Giant hocketing is lost.
This album has been held in high regard as much for its lyrics as its complex music. When I saw the booklet containing NO lyrics, I was quite let down. But then I popped the DVD into my player. And there they were, embedded in some (mostly) clever and effective animation of every song on the album! 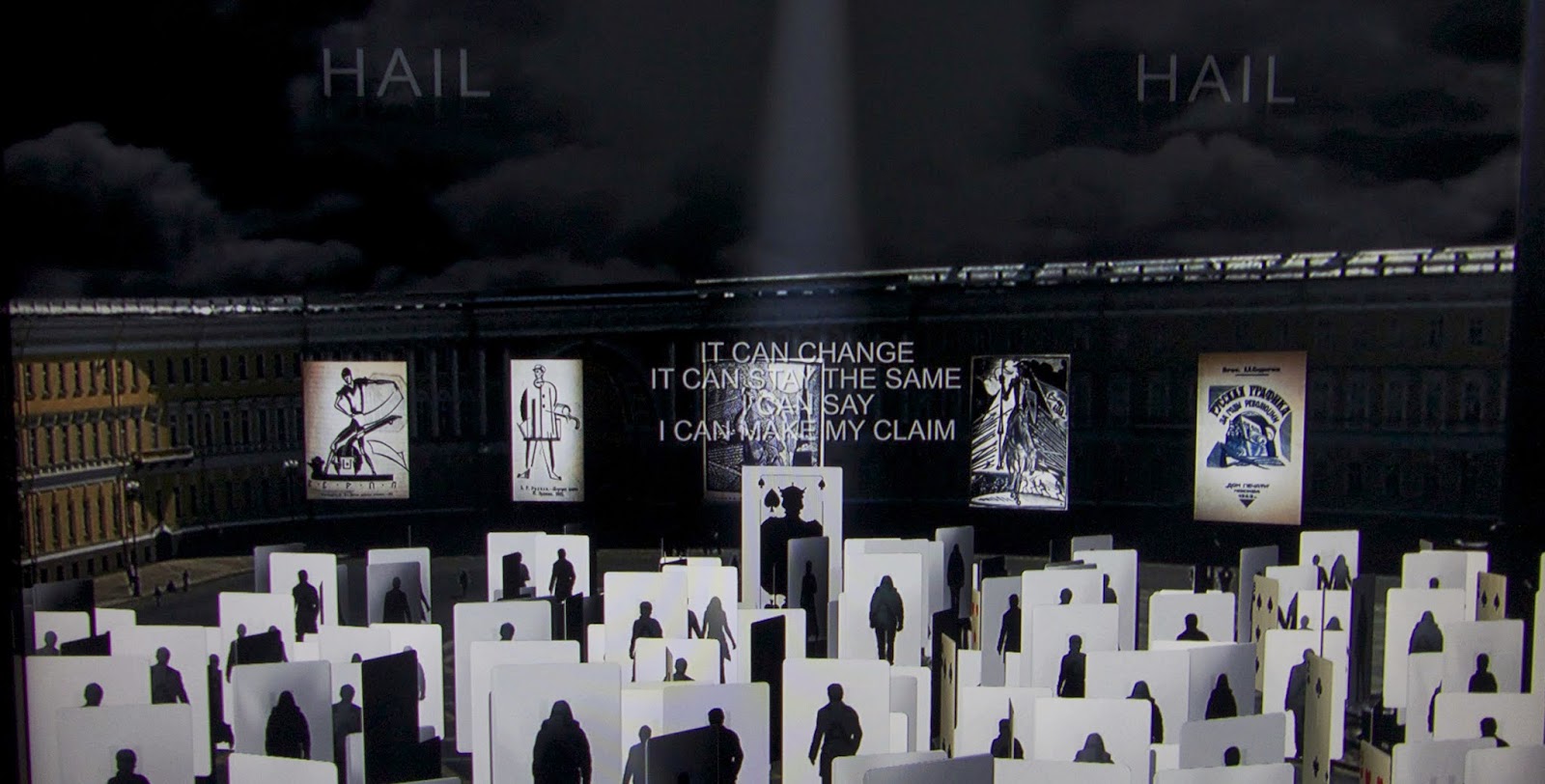 Ironically, the animation I find most disappointing is the one for the aforementioned Aspirations. By associating the song with a fairly generic family, it loses some of its impact for me. The other pieces are all either animated text and symbols or silhouettes, and the universal aspect of that makes them compelling.
In contrast, my favorite animated bit is associated with the album's original closer, Valedictory. Using simple lines and shapes in appropriate position for each of the instruments, it feels like a performance by an invisible band. Very compelling!
Credit where it's due: the animation was done by Gentle Giant founding member Ray Shulman, who's made a respectable career in sound and DVD production. 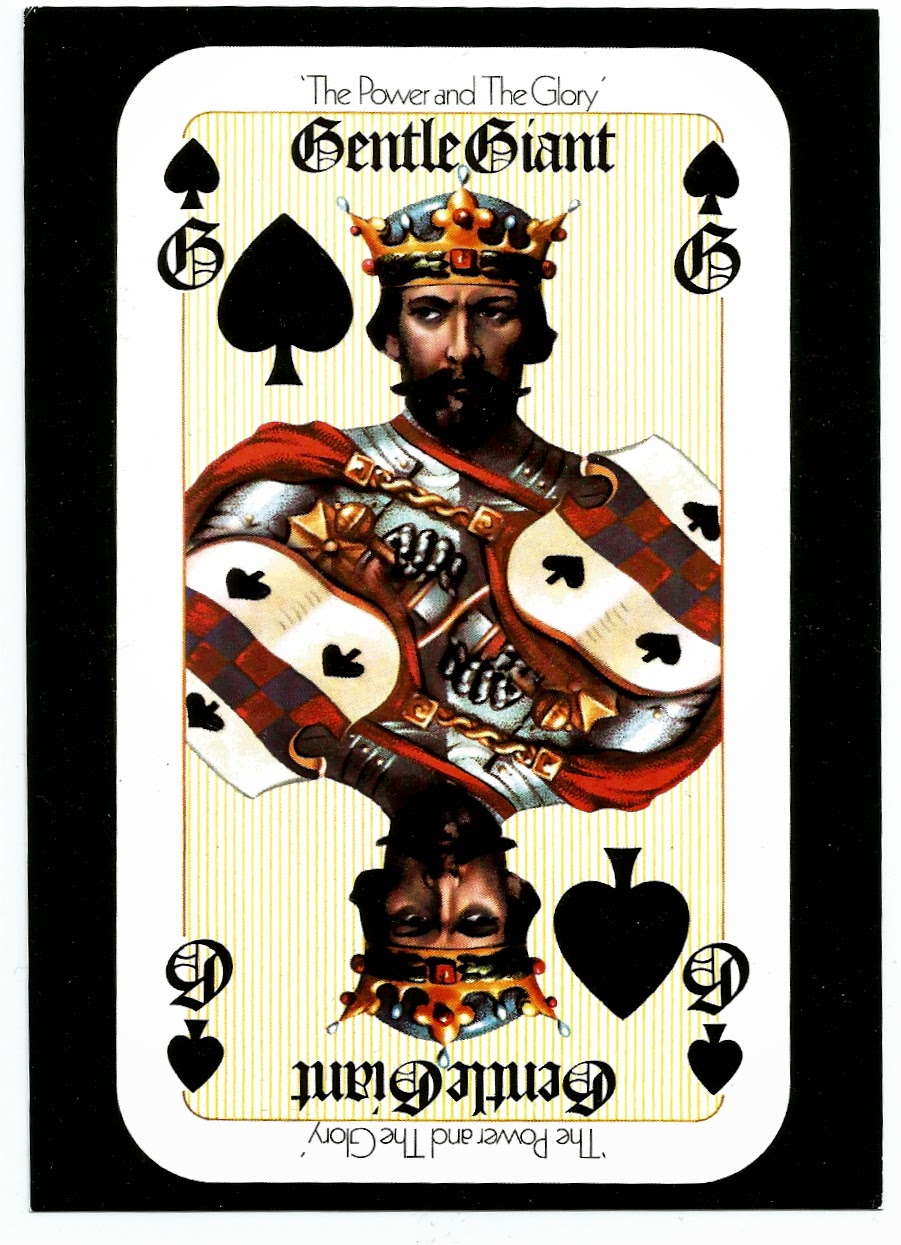 A word must be said as regards packaging. The original LP had die-cut top corners, reinforcing the image of the playing card. Sadly, not the case here. Despite a lavish gatefold box for the CD/DVD set (slightly different image on the Blu-Ray DVD than on my plain old one, according to some fellow GG aficionados) and a booklet containing a comprehensive and engaging interview/essay, the the cover was not properly, ahem, rounded. In fairness, that might have caused a great many production issues. There's only been one CD release that actually had the rounded corners, the one on Derek Shulman's own DRT Records a few years back (though the Japanese mini-LP set also, ahem, followed suit). The album does come with a charming promotional postcard, which I'll scan and add to this post when I get home from work I'm happy to post here.

Like many GG fans, I eagerly await the next Steve Wilson 5.1 mix of a Gentle Giant album. I'd love to see him do justice to the group's final album, Civilian, an album I've always held was a neglected masterpiece.
on August 16, 2014 1 comment: