Spoilers abound below. Take heed.
Every year, I come up with a tie.
Usually, this is because there's a worthwhile book I've omitted and I can't decide between it and another. Inevitably, this happens after I've begun posting the entries, so no going back and renumbering.
This time out, the tie is between two disparate works.
First up, Alan Moore's Fashion Beast. It's a bit unfair to call it Alan Moore's work completely. Based on a truncated film collaboration with rock and fashion impresario Malcolm McClaren, this is the story of androgynous boys, girls and those seemingly in-between, desperately scrapping for a place in the arbitrary world of fashion in the early days of a nuclear winter. 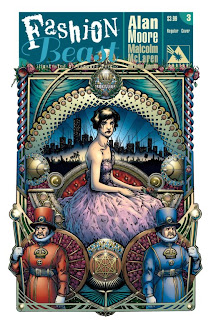 The book is co-credited to McClaren, and the adaptation is credited to Antony Johnson, who has adapted several other Moore works for Avatar Press, and who wrote Wasteland for Oni Press.
The art is more than sufficient. Facundo Percio gives us a full world with drastically alternating visions of beauty and despair. Another Avatar staple, his past work includes Warren Ellis' Anna Mercury.
The story owes no small debt to Beauty and the Beast. The mysterious master designer and his minions are clear parallels to the Beast and his castle lackeys. There's also a parallel to the villagers hunting Beauty, this time in the form of an angry politicized mob attacking our heroine.
As to the heroine...
At first we're given to presume she's a cross dresser, or a drag queen, possibly a pre-op or non-op transsexual.
However, we learn in issue 3 that she's female.
We learn this from an acerbic dresser, very dykey but of undisclosed sexuality as of issue 3 (again, I'm a couple issues behind on this).
So it's a world of dry wit and desperation, coupled with hope and legend. The latter two run a bit thin, and the urgency runs high.
So many mysteries yet to unfold. We've met the true gender of our heroine, Doll (or have we?), and we may or may not know something of the elusive sharp witted dresser. Here's Doll in action from issue one! 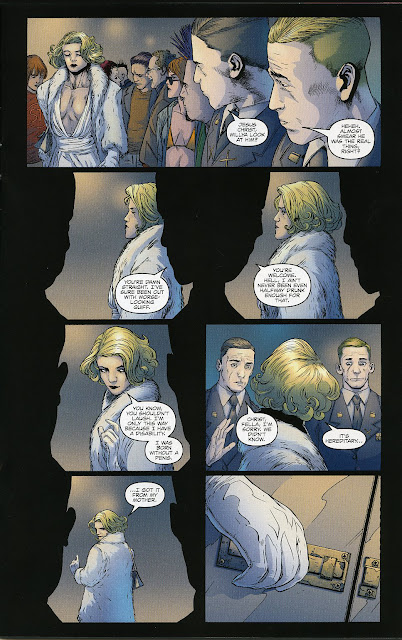 In the follwoing sequence (sequins?), Doll is confronted by the mysterious designer. 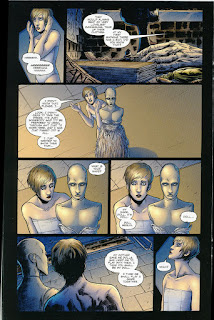 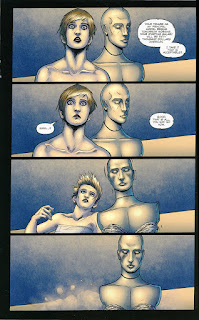 Doll stands proud and defiant on the runway. No tie in to the stream of thought, I just found it to be a cool page! 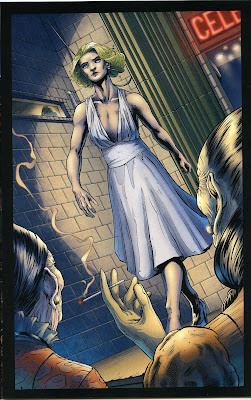 Even in the hopelessness and nihilism, there are many kinds of beauty to be had here. I'm reminded of Moore's Halo Jones (oh, for him to finish that one day!), and can't help but wonder if Doll will save the world through fashion.
A very different kind of woman dominates the second book discussed today: a camel riding explorer of the American West.

I've made no secret of my admiration for Dynamite's Lone Ranger series, espeically the 25 issue origin series. While I've been less pleased with the current run, largely due to the new artist being less satisfying to me then Sergio Cariello, the stories are still strong.
But the miniseries have really picked up the slack.
From last year's Lone Ranger: Death of Zorro to the current Snake of Iron, these shorter cycles are more satisfying than the current longer arcs. Tighter action, stronger character development, and better stories overall.
This outing offers Tonto and Scout (Tonto's horse, in case you've forgotten) rescuing a train in a storm. Meanwhile, the Ranger is serving as protector for a headstrong young woman, the aforementioned explorer.
While this may seem an absurdity, there was a US Camel Corps in the American West, and it's been revived in Texas, primarily for education and entertainment. Camels played a relatively small but still significant role in "taming" the American West. Some, however, regard this as myth, even invoking the infamous ghost camels. This ties into the "ghost horse spirit" that dirves the Kiowa to jump the reservation, one of the key plot points of this narrative.

I like this story a great deal.
This is surprising, in that I don't usually much care for Chuck Dixon's writing- too much machismo, too much smug, all that self-important "guy" swagger leaves me cold and full of contempt. But here, he's written sympathetic characters in a wide variety of situations, and even the most absurd aspects of it have a gravitas that make it worthwhile.
While i enjoyed Dixon's work on Birds of Prey, his Man With No Name reeks of testosterone, and he will always be remembered as the writer who broke Batman's back in the Knightfall storyline.
But then there's his successful adaptation of The Hobbit (as far as I know, the only official comic adaptation of Tolkien to date). And there's this. So perhaps I've been too harsh in my judgment of his work.
There's some wonderful insight into Tonto here, and while the story risks racism at times, it manages to retain the complexity of all characters, even in the cliched scalping scene shown at right. Scalping was not as widely practiced as often assumed, and is not the sole province of native Americans- ancient Celts also practiced scalping- but Dixon is accurate in the locale and timeframe of use of the practice in this story.
Artist Esteve Polls is Spanish, and began working in European adventure books in the early 1990s. In addition to drawing some Gene Simmons written comics (!), he's done other Zorro and Lone Ranger work, including the aforementioned Death of Zorro series.
Oh, yeah, and he drew this. 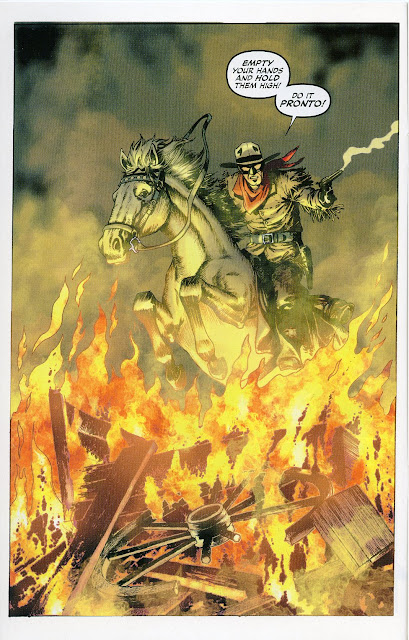 I mean really. How cool is that?
Since I'm posting this a day late, I'll post the next installment in Best of 2012 later today.
Ah, the slings and arrows....