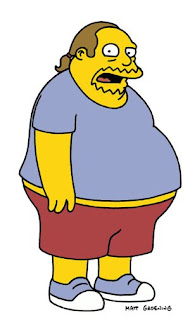 This is the image many people have of comic book fans. In fairness, some of us live up (or down) to it.

As such, food is a big deal to us.

Given that comics serve quite well as an instructional medium, despite many of their advocates' preferences for narrative, it seems only reasonable that comics should delve into the realm of cookbooks.

The first recipe I was aware of in a comic was in an underground, Hungry Chuck Biscuits #1. 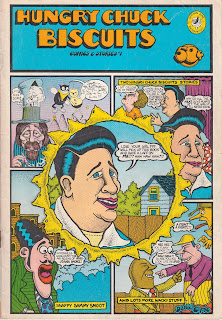 This contained a recipe for a hamburger weighing close to a pound. It says something about how much things have changed in the last 40 years that we no longer see such a burger as unusual or excessive!

The next comic book recipe that jumped to my attention was on the letters/editorial page of American Flagg! #1. 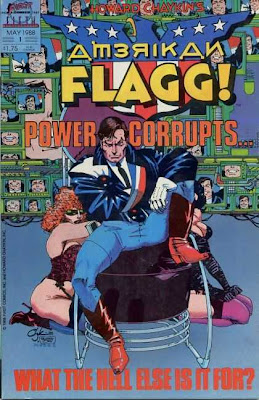 I still have this book, but don't read it often, as my perspective on its cynicism and misogyny, too seldom redeemed by its Martian porn-star "hero", has changed. But I did like its Greek muse, the genetically altered talking cat, its energy, the elements of Alfred Bester's writing that it evoked, and the aforementioned recipe for Spaghetti Alpha Carbonara!

Shortly threafter, haunting Paul's Books in Madison, WI, I ran into a cookbook by Dana Crumb, illustrated by her then-husband, Robert. 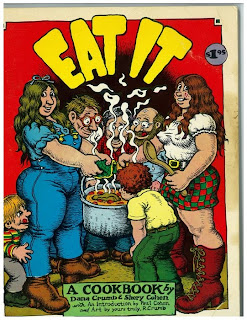 A sample recipe and illustration: 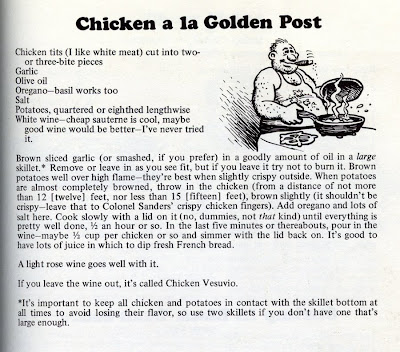 It turns out that there have been cookbooks featuring comic book and comic strip characters for decades. A Peanuts cookbook or a Blondie cookbook is a viable marketing tool, a way to reinforce the status quo (a former party girl like Blondie is content to stay home and cook), and a way to get kids into cooking, if you buy into the then-prevalent notion that only kids care about or even read comics.

Even DC and Marvel got into the act. 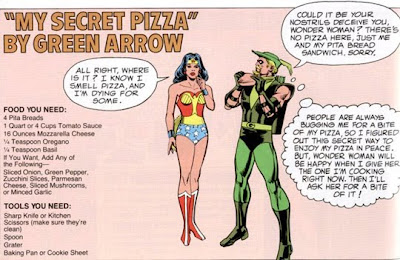 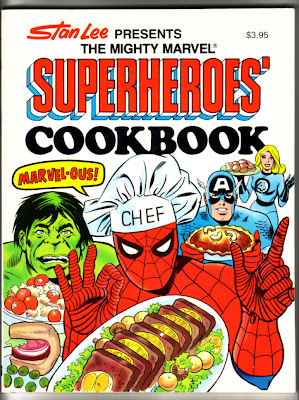 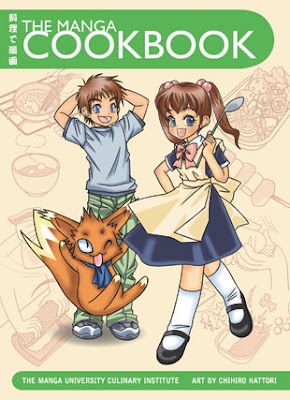 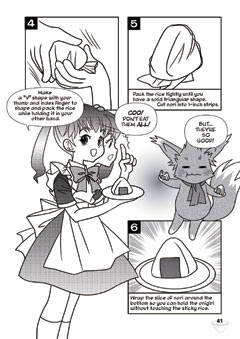 This begins to address what I see as the problem with cookbooks, instructional manuals and technical journals in comic form. They're too didactic. Despite reading being a solitary activity, comics lend themselves to an intimacy, a familiarity with the reader. This last entry incorporates elements of that, at least in my perspective.

Comics should not talk to their readers, they should talk with us.

That's why this is the single best comic book cookbook I've ever seen.

Sorry I don't have a better cover image. I'll update when I dig out my copy. It's with my cookbooks, not my comics!

Northwest Cartoon Cookery was published in the mid-90s by Starhead Comics, a fascinating company that also did a comic book version of WWII promotional film by the US Army, Hemp For Victory. Starhead jumped head first into the 90s fray of zine publishing, and offered some wildly adventurous books along the way, many of them more enduring than much of the zine fare.

This specific book used the old saw of having cartoonists illustrate their favorite recipes. However, on the page facing each recipe, the cartoonist who contributed the recipe offered a one-page meditation on the recipe or its place in their life, or some related matter.

I made Roberta Gregory's Albondigas Soup many times. I loved that she used ground turkey instead of hamburger to avoid the layer of orange grease that so often shows up on this soup in restaurants!

And Joe Matt's recipe for Hot Dog Soup was accompanied by a hilariously depressing treatise on how he couldn't afford insurance on a cartoonist's pay, and so would probably die of gangrene, but anyway, enjoy the soup.

Comics are best when read in solitude, but at their best they give a sense of immersion in a story or a life other than the reader's. Cooking is the most fun in a busy home kitchen full of people, so long as everybody has the sense to stay out of the chef's way.

Solitude and community meet in the comic book cookbook?

Nothing so grandiose, but I can't help wondering why, when I go to my drawing board to work on a comic, I say to myself, "Okay, let's cook."