First, kudos to Marvel for respecting the original numbering on this series, which has been restarted twice in the last 12 years. Nice to see some respect for history!
Ahem. Now, the story at hand.
Good superhero writing is hard to come by, but it's worth it when you find it, and this year's list has a couple shining examples.
This is the first of those.
Jonathan Hickman has been writing complex, challenging stories for several years now. His work on the 2010 SHIELD miniseries established a plausible framework for what has become a fairly tired story convention, the secret society bent on reshaping the world.
So when he was announced as Mark Millar's successor on Fantastic Four, I had high hopes, especially since I'm hardly Millar's biggest fan and I really the FF when it's good.
However, Hickman almost lost me early on. Hickman's work takes two directions. The first is the more tech and analytical, like his seminal work Red Mass for Mars. The second is taut plotting coupled with deeply moving characterization, as in his other remarkable earlier work, The Nightly News. Early in the run, it looked like his Fantastic Four work might fall into the first camp. Elaborate narratives and seemingly distanced characters.
But 'twas all foreshadowing two large events. The first was the formation of the Future Foundation, a school cum think tank for the progeny of Reed and Sue, along with other gifted paranormal children in their charge. They got their own book right after the second event.
The second event was the death of Johnny Storm.
Nobody expected it to be permanent, and of course, it wasn't. But it was a real weeper.
After Johnny died preventing the invasion of Earth by forces in the Negative Zone, a recording was played of Johnny recommending that Peter Parker be allowed to succeed him in the Fantastic Four. These pages are from the first FF (Future Foundation) collection. 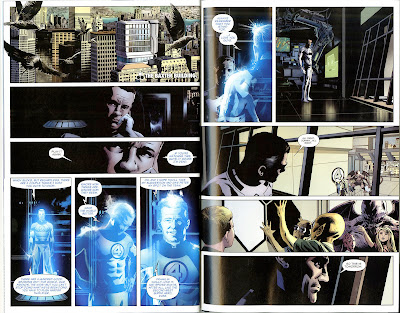 Here's Peter in action with the Fantastic Four, from the same TPB. 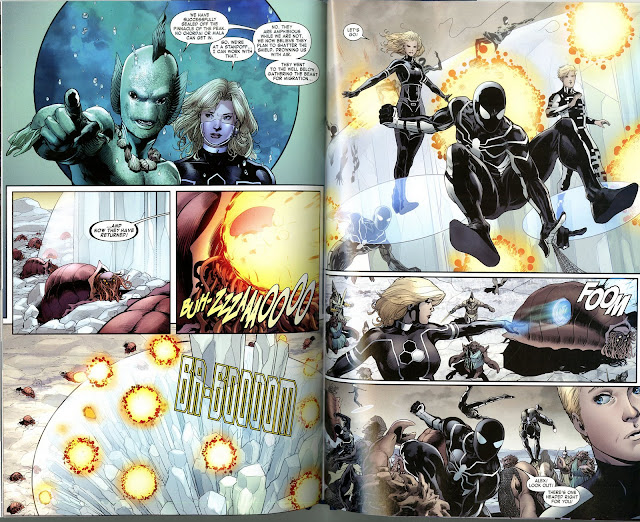 As the subtexts grew, and the potential destruction of our Earth by the Reed Richards of another dimension, the need became apparent. Johnny came back from the dead. 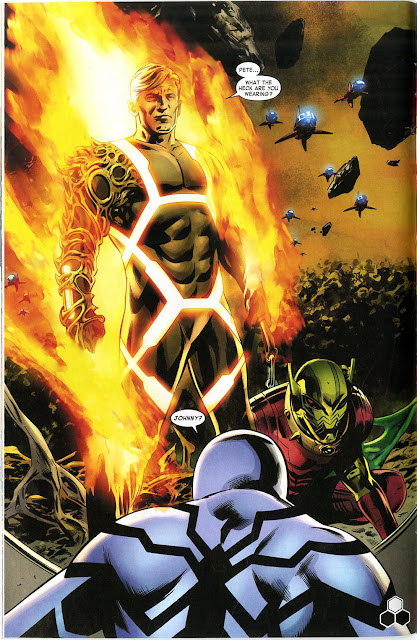 The stories in Fantastic Four No. 600 provided reader satisfaction, but did not resolve the tangle of subplots. Susan may still be Emperor of Atlantis. Peter may still be an FF member. Franklin may tap into his powers in a dangerous way, despite the intercession of his future self.
But even with the reader left hanging for another issue (or two, or eight- I'm waiting for the trades on this one), there's a sense of completion.
We get to see Johnny resuscitated and killed again repeatedly for the amusement of the lord of the Negative Zone, Annihilus, who can only die in our dimension and doesn't particularly care who dies with him.
We see Johnny form a team with his fellow Negative Zone gladiators.
We see Johnny decide to take action when that other Reed Richards makes a deal with Annihilus.
In short, we see a braver, more adult Johnny Storm take a chance on trying to save the day. Again.
His passions are now tempered with resolve. And it plays well. 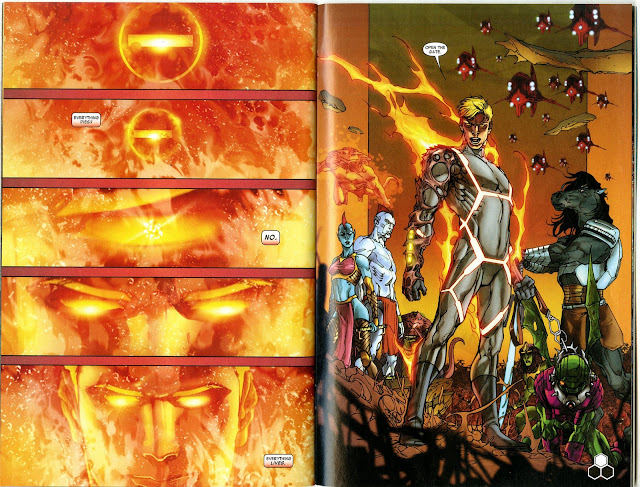 Fantastic Four has been an up-and-down book over the decades. At its worst, it's twaddle. But when it shines, as it does in Waid's Unthinkable run (one of the strongest IMO) or the 2000 Chris Claremont run, it shows how smart, and how much fun, a superhero comic can and should be.
Thanks to Jonathan Hickman, this is one of the shining times.
Tomorrow: No. 11, another double header!
on January 11, 2012 No comments: