I turn 60 in just under seven weeks. More and more, I find that my views of adolescent narratives shift. Yes, I fully accept that people in their teens and early twenties are people, and that their skills and insights are a constant surprise.  But sometimes, especially when I read some of a seemingly infinite number of graphic novels pandering to them, I suspect that Sue Ann Nivens may have been right in that old episode of the Mary Tyler Moore Show: at that age,their interests are shallow and their lives are boring.
Unfair, yes, but it's a judgment on the work about the kids, not about the kids.
Now, there are always strong works within this difficult subgenre. I almost picked Blue is the Warmest Color for this spot on the list. But there was just one cliche too many, the worst offender being the doomed lover angle and its subtext that if you dare to love someone of the same sex, you will die. I thought that was a bad idea when I was first exposed to it in queer porn in the late 70s, and it has NOT improved with age.
I had given up on finding a good book about that age group this year, when along came Bad Houses. 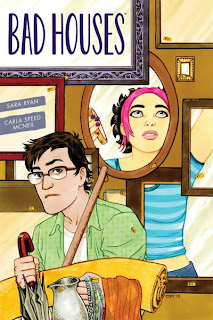 The work of Sara Ryan and Carla Speed McNiel, Bad Houses touches on many themes that resonate with my own adolescence and my subsequent life: rural living, broken homes, missing fathers, dysfunctional parenting, and collecting and hoarding.
More than anything, Bad Houses is about what we take with us and who those choices make us. I'm very familiar with Carla Speed McNeil's work through her enthralling and ongoing  SF magnum opus FINDER (and kudos to Dark Horse for the Ominbus editions!) and with her brief stint on Queen & Country, and quite frankly, her working on this book was my first attraction to it. Having seen the approach she uses to make the mythic plausible, I was curious as to how she'd approach more conventional subject matter.
I didn't expect to get so swept up in the story.
As I've noted, sometimes my bias regarding work aimed at this market leads me to overlook things, though I read Joanna Draper Carlson's blog religiously in an ongoing attempt to not miss anything truly worthwhile. She's turned me on to several fine works, one of which will be discussed later in this year's list.  In any case, this bias has caused me to miss much of Sara Ryan's work, though I do cherish my first printing of her early work Me and Edith Head. 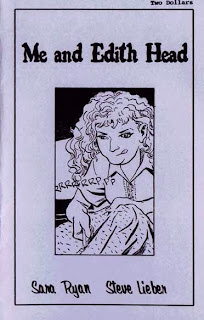 As such, I enjoyed the emotional whirlwind of the no longer a boy but not quite a man Lewis as his life intersects with that of Anne, still young but forced to be the parent to her obsessive hoarder mother. Lewis helps his mother run her business, Cat's Matchless Estate Sales. During a sale, Anne takes shelter in a room marked "private" to pore over an old photo album, fascinated.
Trying to clear the place at the end of the day's business, Lewis walks in. 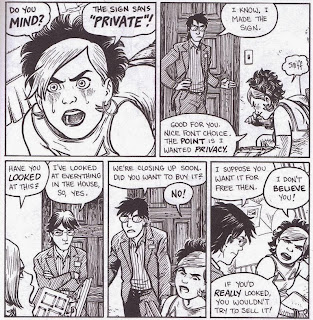 Inevitably, they become one another's anchors, revealing pieces of their shame and isolation based puzzles to each other and to themselves in the process. There's also a subplot dealing with the fear of aging, one dealing with loss and resentment, the story of Lewis' long-gone father.
And stuff. This book talks about people and their use/abuse of stuff.

How we see our stuff says a great deal about how we see ourselves.
The nightmare scenario of any hoarder, a fire, happens in this story. While its outcome is surprising and saddening, it's also inevitable and very true to many such characters I've known.
I have some hoarder in me. I suspect every collector does. My mother had a lot more in her. Seeing Anne's mother wrestle to hold on to every slip of paper going back decades "in case there's a problem" reminds me of her so much. I wonder what it says about this country that there are enough people who resonate with that experience to make this #95 on Amazon's Graphic Novels bestseller list. There's so much to recommend here. The down on his luck rural badass character avoids being a cliche´; there's an odd vulnerability to the extreme assholiness of the character AJ, not so much that you want him to succeed in his half-brained, selfish, pointless and destructive schemes, but enough that you want him to turn himself around, even when you know it's an evolutionary unlikelihood. 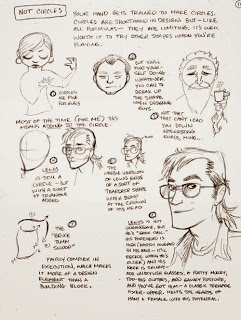 Carla Speed McNeil's art shines here. She uses her characteristic loose yet confident blacks and just enough background detail to bring the scene, and the town, to life. And her character design, a clear strength in her SF work, is noteworthy here. One of the things about working in the realm of the fantastic is that since you're dealing entirely with the imaginary, there are a great many places where nobody can tell you that you got it wrong. Some artists (not Ms. McNeil) use that as a crutch. If anyone was fool enough to include her in that number, however, she's acquitted herself admirably here. It's much more challenging to create something real plausibly than it is to do so with something unreal. Carla Speed McNeil sets a higher standard here.
As I drove up North for Christmas with my family, my thoughts turned inevitably to the past. But this year they were also on this book, which some will be getting as a present next year.
Small towns, dysfunctional families, stuff. You know. Life. 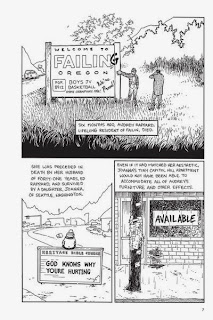 Well, here we go with another year-end countdown. I prefer to do these day by day rather than all at once, as most folks do.
First up, a book I was initially exposed to during Free Comic Book Day. Oni Press' The Mysterious Strangers is an era- specific pastiche: early 1960s superheroes, spies and rock & roll, in a nonstop action package. 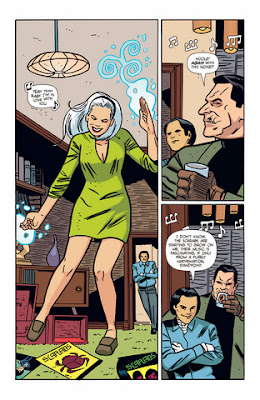 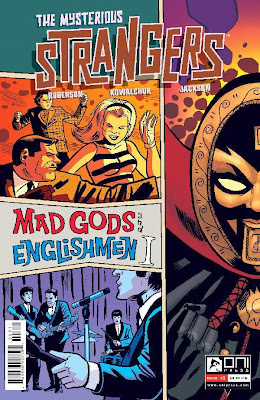 Within the first three issues, we've had Mayan intrigue reminiscent of the pulps (early Doc Savage comes to mind here), a superpowered spy team (our title heroes), a not-so-thinly veiled Beatles  homage, and a very cool riff on my beloved Doctor Strange! There are hints of X-Files (and by extension, the X-Files' inspiration, Kolchak, the Night Stalker), coloring and art reminiscent of Ditko and Mike Allred courtesy of Scott Kowalchuk, and some terse if dated writing by Chris Roberson.
Yes, the whole thing is incredibly silly. And it isn't really about anything.
I don't care.
It's become fashionable for all (ahem) serious comics to be crawling with profundities and deep insights on the meaning of (fill in you pet message here). And  (cough) SERIOUS comic readers are expected to follow suit. But I see nothing wrong with well-crafted escapist fiction.
If that's not your cuppa, so be it. But life is plenty hard enough. While art and literature and cinema and comics and films (and on and on) do help to direct and inform our lives, there are plenty of times when you just need to take a break and take some comfort in a really wild, well-told story.You can parse anything for its deeper meanings and usually find some, but give it a break once in a while. The Mysterious Strangers is a really smart book that's a great getaway.
The sentiment is best summed up in this sequence from Scott McCloud's ZOT!