I've begun a new blog. Since it serves a different purpose, I'll continue this one as well, and try to spend more time on my third, which I've neglected far too long!
I don't expect there will be a great deal of crossover in the readerships of these blogs, but I hope you'll give the new one a chance.
It's devoted to job search issues and attempts to understand the nature and uses of wealth.
It's called Opportunity Knocks on Wood!
I've provided a live link for your reading pleasure!

Wow, back on schedule! Let's keep it that way!
This page worked fairly well. Still need to push the blacks farther, but that will come when the narrative resumes its intensity, probably in the next page or two.
I'm also looking at reworking a couple pages with which I'm less than happy, but I want to get the first pass on book I completed before doing so.
Ahem. A Private Myth, page 19. 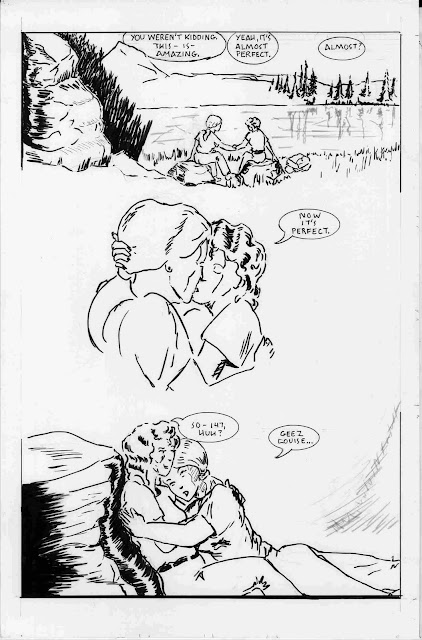 Again, terrific fun drawing this page. The environments resolved nicely and the character poses are both plausible and consistent with their emotional state.
So few comic pages are devoted to repose, unless they're in those tedious "slice of life" comics that try so earnestly to bring a sense of urgency to getting a cuppa Joe.
Not that there's anything wrong with the mundane, but if that's all the story you have, why should your readers care?
Conversely, so many "how to draw comics" manuals are devoted to the most dynamic angle, the most Kirby-esque pose.
But consider this page, regarded by many (including me) as one of the best works ever done by John Buscema, who did hundreds, probably thousands, of pages of Marvel superhero and barbarian comics. This is the first page of Silver Surfer No. 4.

Ready to post this week's art, but let's catch up first!
This is the first page of an uncompleted Surrealist Cowgirls story. Four pages are done to date.
Some of the elements from this story showed up in the 24-hour book I posted about a year and a half ago, so the story will have to be re-tuned for its completion. Ideas for that are flying around my consciousness like transient modes of thought, to quote Blazing Saddles.
I have a great fondness for these pages. Whatever direction this story takes, the first four pages will remain as they are.
Now, Page one of It Does This When I Hurt. 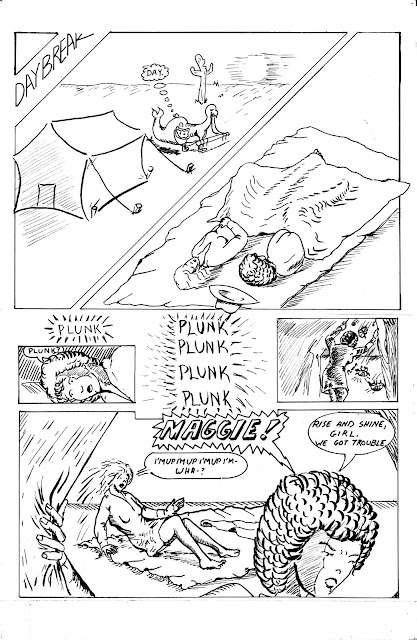 Posting almost immediately following: a new page of A Private Myth!
on January 30, 2011 No comments: