Well, the next page of A Private Myth is done, but my scanner access is limited till tomorrow or Tuesday, so please enjoy another Tranny Towers page until then. 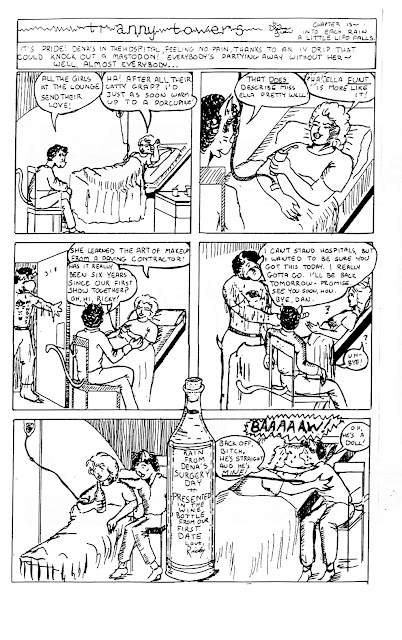 A few notes on this page:
First, I really liked the title banner device.
Second, the whole drag show thing that Dan and Dena are dishing about... that's a world I was never much part of. I danced on the periphery of it for a while, but never really got into it. Now, thanks to Ru Paul's Drag Race, the runway show become a default association with trans folks for a great many people, gay and straight. Well and good, but it doesn't really speak to the whole range of our experience. Truth is, living day to day life is not a constant catfight, and I don't put on a ton of makeup, mile-high hair and CFMs to play with the kitty.
I do really like the line "she learned the art of makeup form a paving contractor", however.To me, that dry wit is the best of that world!
I'm not sure if the bottle device works as well as I hoped it might. I wanted to leave the reader with an image of Ricky standing on the roof holding out the bottle with a funnel in it, which struck me as an odd and giving thing to do.  Problem with the page is that the reading path is interrupted so strongly by the bottle. It works, but then again, there may have been a more effective approach, in retrospect.
There are approximately 24 more pages of Tranny Towers to post. Nine remain from the anthology, and there were 10 or 12 pages that were not collected. The characters also appeared in two strips in GAY Comics, a couple truncated attempts at The Great Transgender Graphic Novel (first as Athena, which predated all other attempts, and then as TranScending, some pages of which have been posted here previously), and some scattered appearances in editorial strips in the late lamented TransSisters magazine. All told, there's somewhere around 50 or 60 pages of these characters. After I've posted them all here, I'll anthologize them. It would be nice to have a comprehensive edition with a spiffy new cover!
I'll post the next page of A Private Myth later this week, right after I scan.
on February 13, 2011 No comments: