Next item on the list is one of the oldest and newest characters out there.
Under IDW, Popeye is experiencing a remarkable revival.
Though the character never went away to the faithful among us, recent attempts at the character have often fallen short of his potential. The last major take on Popeye that really stood out was Bobby London's run on the strip, which deserves a proper collection.
Here's the cover from the one collection in print to date. 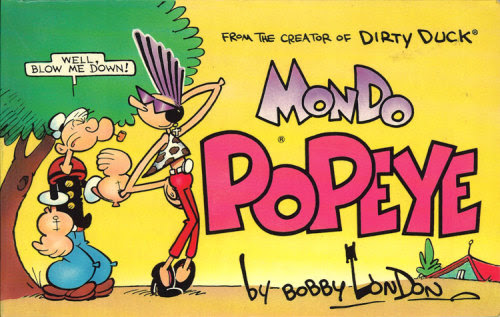 MInd, this is not to take anything away from others who have worked on the character. But Segar, Bud Sagendorf and Bobby London are tough acts to follow!
I was so grateful when Roger Landridge took on the new book.  While I've yet to pick up on Snarked, I'm sure some of you will remember that his take on The Muppet Show made my Best of... list a couple years ago.
And Landridge brings the right tone to the character, echoing Segar's run without simply aping it. Landridge knows his comic history and is not afraid to use it. as evidenced in this cover for issue #1.

As the pages below clarify, this book incorporates numerous elements, not just of the strip but of its original period: black and white films, jalopies, language and phrasing specific to the era and the strip (some of which can be traced to Yiddish ghetto vernacular- I know just enough about that to be dangerous, so corrections are welcome).
Landridge also pulls in supporting characters from the original Thimble Theater, and sometimes gives them their own strips in the book, as in the examples posted below.
The book is remarkable for its covers, printed on flat (non-gloss) paper! This feels like an old book with new stories. I envy young readers whose first Popeye comics are these!
Beautiful.
As with some of the other picks in the current list, this book is full of energy and charm, but not at the expense of solid storytelling.
Kid's books deserve to be as entertaining and smart as those ostensibly aimed at adults. I'm so fed up with simpering stories that remove all conflict being hailed because they're "safe". How are kids supposed to learn to effectively resolve conflicts if they're not exposed to the process at every opportunity?
I don't mean to say that we should barrage kids with brutality and animosity, but let's face it, conflicts happen. Of what use is a story that denies that reality? I contend that denying reality to kids, lying to them about that reality, is more harmful than letting them face said reality.
And Popeye is a prefect vehicle for that. At heart a pacifist, he's not afraid to face and deal with problems in an up-front manner. When Popeye makes a mistake, he corrects it as best he can, and he tolerates no wrongdoing from others. In short, he has a clear idea of right and wrong, and he lives by it.
See example below of a fight scene. 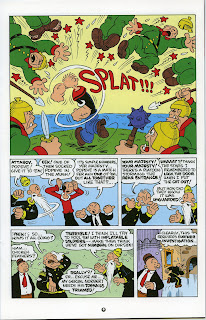 There's the energy of the original strip that we mentioned before!
Note that there's a fairly high level of detail here, especially relative to Segar's original strips. Segar's backgrounds were light and sketchy- his crowd scenes were often fields of ovals with eyes and noses, for example.
In this page, while Landridge uses solid fields of color as background in panels three through five, the first and last panels have full backgrounds with more than sufficient detail to tell the story and reinforce the two things that sustain a Popeye story: energy and gags.
The stories themselves are as imaginative as Landridge's Muppet work.  In the example below, Landridge riffs on the definitive Fleischer cartoons in a story involving Bluto giving Popeye the business in the process of making a film.

Here's an example of a backup story spotlighting one of the other characters from a Segar strip, this one from Sappo. 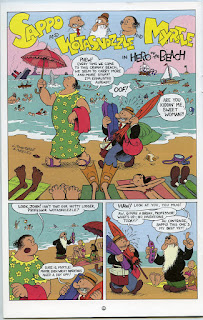 Note that this "best of" refers to IDW's Popeye and not to Landridge's.
While I defer to none in my admiration of Landridge's work on this and other books, I must note that IDW has been a consistent supporter of classic comics, rivaling Fantagraphics for its quality line of reprints.
We'll see another example of the great IDW reprints in a couple days, but I do want to note that they are also publishing a Popeye reprint book, featuring the work of Bud Sagendorf. Craig Yoe has a book of the Sagendorf material. While I do love my deluxe and too expensive for me (but worth the money) comic reprint volumes, there's a lot to be said for the traditional format.
My one quibble with the format is that they're using a nearly identical cover structure between the two titles, and the same flat paper stock. If you buy your comics in a hurry, as I sometimes do, it's easy to think you've picked up the next issue of one when you really grabbed the other.

The first collection of the Landridge work is due out January 22. The regular title continues on schedule. I was concerned that Landridge might have to sacrifice quality to maintain this pace, but so far I'm pleased to report that such has not happened.
Tomorrow, number four in the Top Comics of 2012, as we ride along. 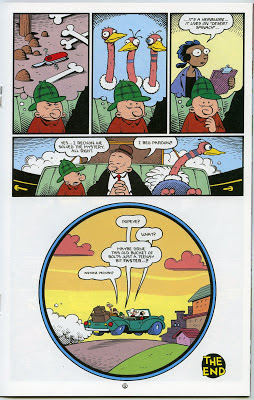