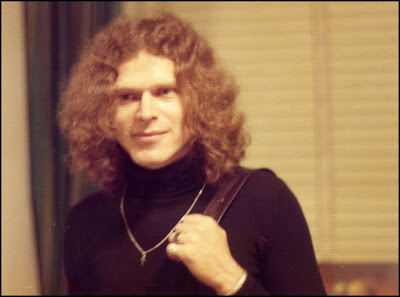 I grabbed this great photo from Golden Age Comic Book Stories, one of the intriguing blogs I follow. You can find the link in my list as well.
This time around, they're posting the stunning Purple Pictography run, which concluded with episodes written by Vaughn and drawn by the so powerful Bernie Wrightson.
I believe the Purple Pictography stuff has been reprinted a couple times. It's in Wrightson's book A Look Back, at least the Wrightson/Bode' collorations, it's in one of the Fantagraphics trades (I think- my Bode' stuff is upstairs), and Fantagraphics did a stand-alone color comic of it in the 90s. But it's still a treat to see it here. Besides, I think these are scans from original printed pages in Swank.
However, the remark at the end of the Golden Age post comments can be inferred as Bernie being unhappy with his work with da bode'.
Well, I chatted Wrightson up on this very issue last year at San Diego, and he had nothing but kind words for Vaughn. Said it was a delight to work with him.
But then, Bernie seemed to have kind words for most folks!
on August 13, 2009 No comments: