Ted McKeever is an odd duck.
He;s been at it close to 30 years, on and off.
His comics appear sporadically and appear at first blush to be abstract sketches, tone poems that function more as ciphers than narratives.
Then you finish reading an issue and realize the scope of his accomplishment. He's sucked you into an impossible emotional whirlwind of story. How does he do that?
His works Metropol, Transit and Industrial Gothic defined and redefined 90s Dadaist angst. His Superman's Metropolis, putting Kal-el in the word of Fritz Lang's classic SF film, remains one of the best of the Elseworlds books to date.

His anti-technology bent and oddly empathetic nihilistic tone bring to mind the mutant offspring of David Lynch and recent Zemeckis films.
2010 was a bit of a renaissance for this curious creator. In addition to a continuation of Shadowline's Definitive McKeever Library, we saw his new mini-series Meta4. 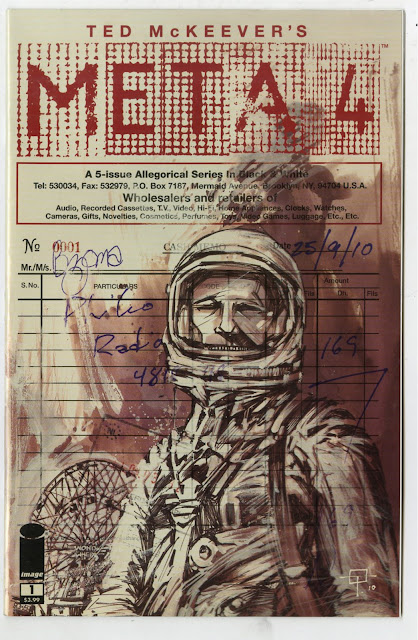 I want to applaud Image for taking a chance on this. In a year in which floppy sales were down by an average of 30%, to push such challenging material is brave indeed. Image has taken many more chances this year (more on at least one of them in future posts in this series), and this has led me to re-evaluate them as a publisher.
As for the book itself, the only reason I've ranked it so low in my top books of the year is that my budget didn't allow me to pick up the last 2 books in the 5 book series.
The story of an amnesiac astronaut, a mute giant woman, and a cadre of other damaged characters, this is challenging stuff. 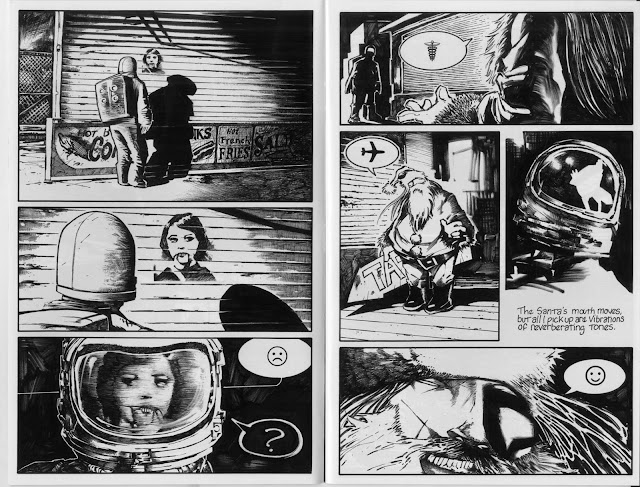 Communication through icon and reflection. Sparse, lonely, and absurd. And yet I couldn't help my fascination with this story.

Here we are, wrapped in suits of skin, able to see distorted images of one another, but unable to really touch. How tragic, how absurd, how human.
We soon discover that what we took for an alien landscape trapping our astronaut is in reality a decayed Coney Island. He has no idea how he got there. A Coney Island of the Mind, if you please, thank you, Mr. Ferlinghetti.
NO less a creative voice than John Mueller, creator of the two profound, brutal and beautiful 90s series, OINK, has also sung the praises of this work.
Tomorrow: No. 12, and a rocket ship!
on January 03, 2011 No comments: