Beginning my annual series of posts of the best of the previous year. Most folks do these all at once, but I like to take my time and spend a bit more time on each.
We'll begin with the works that almost made it, and the reasons why.
First, Daytripper. 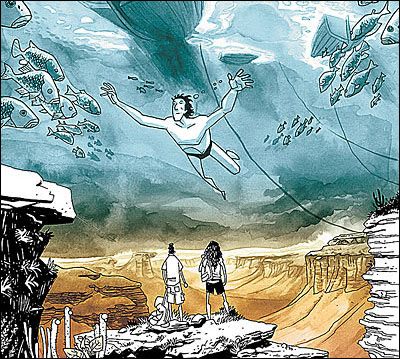 This book remains a fascination, and I wish I'd see something new from the creators. In fairness, I've not checked in with them for a while, but you'd think a work this acclaimed would generate more followup press for the creative team.
This didn't make the cut this year for two reasons.
1. I already put it in last year's Best of... and wanted to leave space for other work equally deserving of recognition.
2. It's not really a 2011 book. The series was completed in December 2010, a fact conveniently omitted by the graphic novel purists who don't pay attention to a work until it's collected. That snobbery really gets under my nose!
Next up: a very different book.
Here's One Soul by Ray Fawkes.
This book is a compelling exploration of the standard 3 x 3 panel grid, used to tell interlocking stories with captions throughout.
The book tells the stories of multiple characters from birth. It slides from one to another, through caption only, occasionally veering away from the 3 x 3 configuration by joining the panel areas into larger panels, but never abandoning the grid.
Here's a sample tier.

This is not included for one simple reason. I'm not done reading it yet!
The same excuse applies to the next runner-up, Return to Perdition.

I've enjoyed the Perdition series a great deal over the years. I own a page from the Garcia-Lopez volume, On the Road to Perdition, and thought the film of the original book was one of the better film adaptations of a comic, despite its altering of the ending. I got to visit my pal Terry Beatty while he was working on this, and was delighted to see it at Minneapolis FallCon this year, just before its commercial release. I'm reading the library copy of this right now, but if he makes it to Spring Con, I'll try to pick one up from Terry then. I'll be done reading this soon, but right now.... no.
See Terry's blog link on the side of this page for more info on him!
The final runner-up is a good book that just had one problem too many for me, Lady Mechanika.
WARNING OF SPOILERS BELOW!

There are a lot of things I like about this book. It's tightly written, elaborately drawn and very well colored. The concept is solid- a powerful woman whose life is a mystery, even to her, both hunter and hunted.
I love the steampunk overtones. The slightly soiled elegance of the whole quasi-Victorian faux antique tech never really wears thin for me.
So with all that going for it, why didn't it make the cut?
Well, it's sort of like the old Dark Horse book GHOST. It dances right on the edge of being sexist.
I'm not talking about the cleavage cut-out in the costume, though that always struck me as highly impractical for battle. Nor am I talking about her ample, ahem, tracts of land. After all, some women are so endowed, though they are (you should excuse the phrase) disproportionately represented in comics in general.
No, I'm talking about her.
There's an axiom that describes the different catalysts in the heroic paths of men and women.
A man becomes a hero by having something taken from him: property, ability (think Daredevil or Dr. Strange), or a loved one (think Batman, Superman, the Phantom, etc.).
A woman becomes a hero after something is done TO her directly. Think about Red Sonja (rape), Batgirl/Oracle (disabling by shooting coupled with implied sexual assault), or Shrinking Violet, who lost a leg in the Giffen Legion run.
To be sure, there are exceptions, but when a female hero's story begins with multiple body part dismemberment, I have a hard time seeing beyond that. Funny how relatively few stories there are that begin with this happening to a man. In fact, aside from Miller's classic RONIN, I can't think of any!
This is still a worthwhile book, in spite of its big thematic flaw, and I'll stick with it for a while to see if it overcomes said flaw. But I'm sorry, it's just not up to Best of the Year material with that in it. Creator Joe Benitez deserves continued attention for the level of work he's doing. I'd like to see his characterizations reach the high level of the other elements of his work.
Tomorrow: the Best of 2011 list begins in earnest.

First of two new posts for this second Sunday in 2012.
Posting a Tranny Towers page! This was the penultimate page in this storyline. 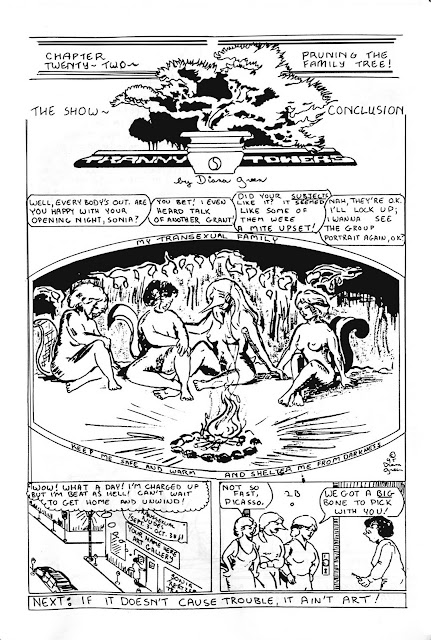 As always, minimal cleanup in Photoshop. I was quite fond of the Bonsai logo, even if it did take up too much real estate on the page.
I have the originals filed, and will rescan some of the pages before going to press with the final collection of these.
The title of the piece within the chapter, Keep Me Safe and Warm and Shelter Me From Darkness, comes from a piece by the John Williams group SKY. I performed this piece at my niece Jessica's wedding.