James Robinson's work on Starman remains a benchmark not just in superhero stories, but in family and extended family narratives.
Is it any wonder, then, that I really like the new Shade mini-series? 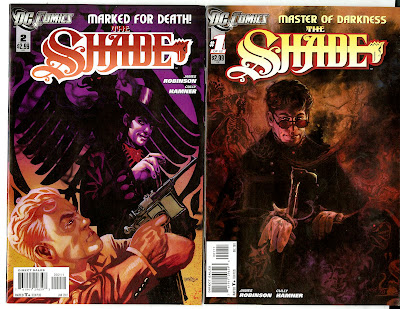 The Shade is a 1960s Flash villain, re-imagined as a bit more of a moral cipher in the previous Starman series. In the revisioned narrative, Shade had befriended Oscar Wilde and had film director Tod Browning as a mystic nemesis. This is not the simple saw of villains being more interesting. It's more about the line between good and evil being blurred in one character, which makes for fascinating writing.
In this mini, the side focus is on Shade and his evolving relationship with Molly O'Dare, sister of and officer in the all-cop O'Dare clan, a relationship first suggested in Starman no. 41 (1998). An elaborate story involving Shade's continually cryptic past is the larger framework.
As is the case in much of Robinson's writing, the story offers new questions for every answer. 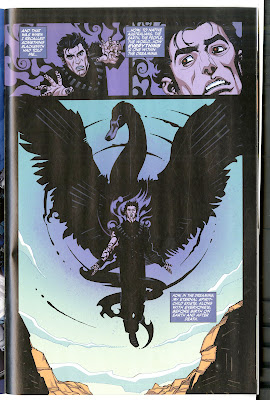 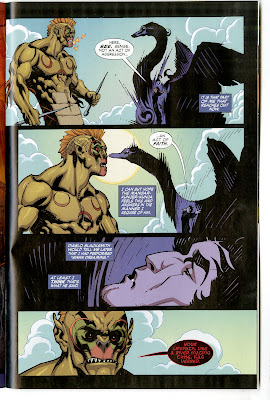 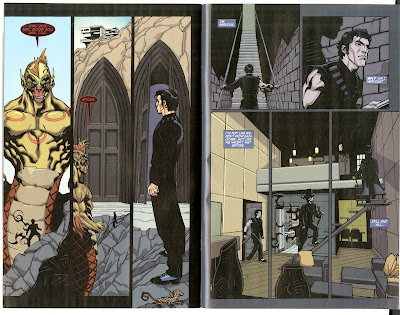 I was originally put off by the harshness of Cully Hamner's art on this book. I found Tony Harris' elegant, Deco-tinged interpretation of Opal City and its inhabitants a much better fit for Robinson's writing, but the work is growing on me.
I hope sales for this pick up. Robinson has indicated on twitter that the series might not be completed if the floppies don't sell well enough, which I would regard as a real loss. Much of Robinson's superhero work has been strong (though I didn't much care for The Golden Age), and as eager as I am for his upcoming Earth 2 series from DC, this is just as important.
Next: No. 4: a nice Springfield mish-mosh.
on January 21, 2012 No comments:

Winding down the 2011 countdown.
When Nickelodeon was first starting up, it aired a series called Video Comics. Cheaply made, these were simple old-school animatics. The camera would pan and zoom around comic book frames while actors did voice-overs of the dialogue.
One of the comics used by producers Klasy-Csupo was Sheldon Mayer's Sugar & Spike. K-C went on to "create" Rugrats, a series about talking babies who formed their own society.
Hmm... sure they created it. Uh-huh.
Sheldon Mayer's 1956 creation remains his strongest work, no mean feat for the man who created Black Orchid, the Red Tornado, Scribbly, and wrote and drew what many (including me) consider the definitive Rudolph the Red-Nosed Reindeer stories, apart from the original Gene Autry song. Oh, yes,  Mayer was also the editor who talked DC Comics into first publishing Superman.
Now, there is finally a decent reprint edition of Sugar & Spike.

These deceptively simple tales of babies speaking their own language while trying to understand the world around them have fascinated comic readers for more than five decades. And few had read them.
There was a one- off of the final unpublished issue, number 99, printed in 1992, but created in 1968.
There were a few digests, but none had appeared for more than a decade.
The duo made cameo appearances in books like Brave and the Bold and Kingdom Come, but unless you knew the characters, they were only anomalous ciphers.
In 2002, DC issued a reprint of No. 1, along with a pair of plush dolls.
In fairness, some of the marketing issues are due to creator Mayer's insistence that nobody else do the characters. He had that right, and I applaud him for it, but it may have been one factor in making DC more resistant to reprinting the work.
Now, here it is, in too deluxe a format.
Why too deluxe?
Well, the colors are a little off, the paper a tad bright, and the format is at odds with the content.
As much as I love this work, if there is any comic that's for kids, this is it.
I've written in the past about the delightful paper dolls that Mayer included in the comic. There are also coloring pages and comic pages in which the reader writes in the script.
Now, I don't care how much you love your kids, you're not likely to get them a $60 hardcover book to cut up.
This should be a series of $20 TPBs. Kids should read this, draw in it, write in it, and cut it up. 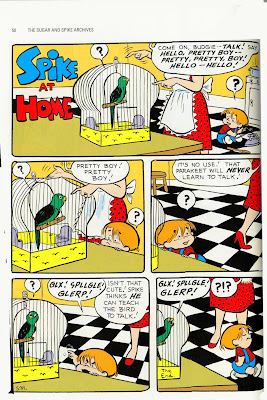 Sorry, some comics should be kid stuff. This is one, and as wonderful as it is, it deserves to be treated as such.
And being kid stuff doesn't mean it's not worthy of adult attention. This work contains more genuine sophistication and subtlety than any of Frank Miller's recent xenophobic tirades. There's a clear understanding of the human condition in these deceptively simple tales of baby talk!
Sugar & Spike is an important book, but DC seems bent on sabotaging its reissues for some arcane reason.
Until we get a proper reissue, please enjoy this one. If you don't have $60 for it, the library is our friend!
Next: Number 5, something dark yet light. 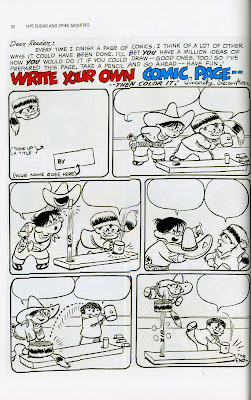