A bit late again- this scanner access is so frustrating! I thought I had it it solved, but the one I got was incompatible with my system. All the running to "fix" it put me behind schedule again. Grr.
I am preparing a Kickstarter. My original plan was to do Tranny Towers, but I've been persuaded that Surrealist Cowgirls is a better choice. I may have a publisher for TT, but that's a discussion for another day.
So it's back to looking for a good scanner.
Meanwhile...
As I was planning the former, I thought of finally doing this ad parody that's been in the back of my head for decades. The Charles Atlas ads were EVERYWHERE until the early 1970s, and the company is still around. It struck me as so hyper-masculine that this parody seemed inevitable.
Next: more Surrealist Cowgirls! 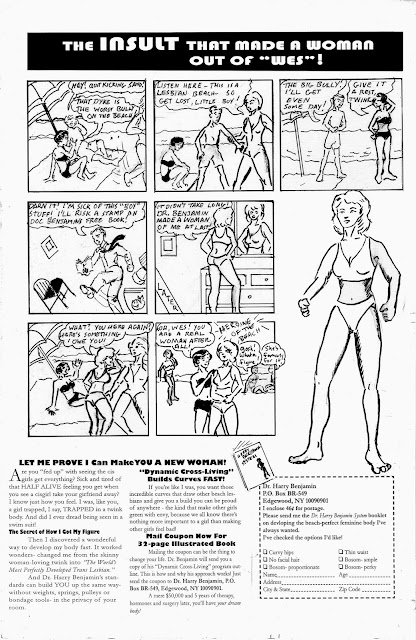