A few quick thoughts on a recent revelation: I have a superpower.
I'm not sure exactly when it started, but I can be invisible. I have no control over it at present. I first noticed it about ten years ago. 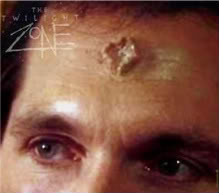 It happened when I started gaining a significant amount of weight. People who once saw me and sought me out for casual conversation, social interaction and dating started passing me by. When I first noticed this, I started feeling like the central character in Robert Silverberg's To See the Invisible Man.
This didn't make sense to me. The visible spectrum of light still hit me, and there was more of me for it to hit. The people I passed didn't walk in front of cars, or run into doors or to each other, so clearly they could see. They just couldn't see me.
Or like the society in which Mitchell found himself in the story, they chose not to see me.
One can argue for weeks about fat people. It's their fault, it's genetic, it's laziness, it's a sleeping gene. Who cares? In a practical sense, it doesn't matter how you got here. You're here.
Adn you want to be dealt with fairly and respectfully.
In that spirit, two recent comics come to mind. The first, less obvious one is Thin by Jon Clark.
This is a horror book, which may color its perspectives a bit. After all, as Stephen King notes, horror is about despair, while SF is about hope. Even in light of that, and as intriguing as the first issue is, I'm having a really hard time with this one. 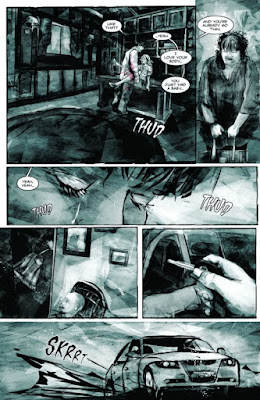 The arguable protagonist, Doris Greene, begins the story with a gleeful eating binge followed by shame-based burying of the fast-food containers in the trash. She sees a baby alone on the threshold of her home, and enters  only to find her husband Gerry having sex with another woman, while commenting on how thin she is after having given birth. Rather than confront the cheating creep, she apparently blames herself. She takes off to the grocery to stock up for yet another binge. The clerks snicker at her. Rather than call them on their rudeness to a paying customer, she leaves.
In the parking lot, she chances on a woman named Lacy, an old friend who's lost a great deal of weight, but still has disproportionately large breasts and the vapid, self-absorbed attitude of the stereotype dumb blonde. Page 9 opens with a gratuitous butt shot of dear Lacy. Lacy tells Doris the secret of her weight loss.
Over supper, rather than confronting her cheating husband, Doris tells him of her new plan to lose weight. He shows contempt for her goals rather than support. She responds with yet another binge on her way to the treatment Lacy disclosed.
She meets Doctor Romero, the man who supposedly administers the weight loss treatments. He also breeds dogs (and mentions in passing, in broken English, that his specialty is cross-breeding species, a probable clue to the storyline).
Doris goes to the Doctor's basement, where the procedure is to be done.
I'll stop there rather than reveal the whole first issue, though that's a great deal of it.
There's not one likable character in the whole book. Gerry only cares about himself, the store clerks are immature and empty-headed, Lacy is vapid, and Doctor Romero is tired and resigned to his fate, which he obviously loathes.
In a Comics: the Gathering interview, creator Jon Clark said, "I tried to stay true to how it would feel to deal with the issues that she has and perceives that she has, and if a message comes out of that, well, that’s just a gift." From this I infer that Clark is not a heavy man, in the sense we're addressing here. And maybe this level of cynicism is necessary for a horror book.
But I don't care about that. I care about Doris, and the other fat women, real and fictional, whose lives are ruined by the contempt of others. This is not exonerate anyone who's overweight from their own actions. It's to say two things:
Fat people in the comics are mostly invisible. Sometimes they're villains like The Kingpin or The Blob (how's that for a reaffirming name?). Fat women in comics are pretty much nonexistent, with the exception of the (again) evil Granny Goodness. 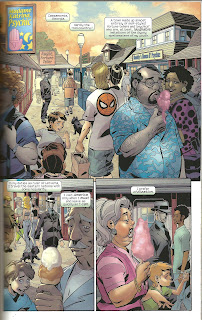 I'm working from memory to get this written in a timely fashion. If I've overlooked any significant characters, please let me know. However, I contend that fat people in general, and fat women in particular, have rarely, if ever, been fairly treated in comics. Most often either we're not there, or we're seen as objects of contempt, ridicule or pity, as in this page from the otherwise wonderful Fantastic Four story Unthinkable.
Now, in fairness, that's a shot at the whole country, but the artist, Mike Wieringo, has chosen to use mindless, heavy people eating junk food to convey the concept, as though heavy people exemplify the nation's worst. It may not have been that overt in intent, but what does it say that the artist's mind went there to present that idea?
This is not to say that there are not, and have never been, positive images of fat people in comics. Inspector Dolan in The Spirit was somewhat heavy-set, as was Batman's Commissioner Dolan and Superman's Perry White.  But for women, sadly, we often had this: 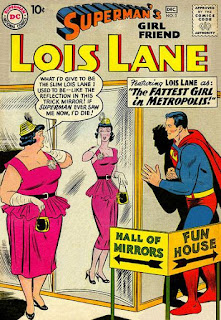 To be fair, there were also 50s and 60s stories in which Superboy gained weight, and the anarchic personal favorite, Herbie, the Fat Fury. 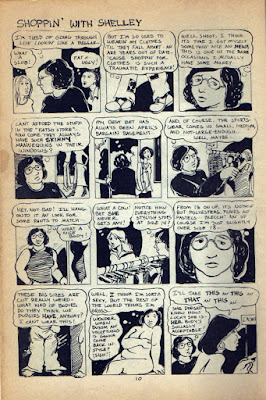 And then there was the early 70s underground Dynamite Damsels, the first collection by Roberta Gregory. Shelley's story has a mostly positive end on its second page, and shows a fat chick with the capacity for actual self-acceptance. Despite her small victory in finding clothes that are affordable and fit her in the Men's department, she still has to deal with the barbs and slurs of others, including two young male toughs, one of whom shouts at her, "Hey, I like a chick I can find in the sheets!" That aside, this comic dares to show a fat woman as an empathetic person, a whole person, and to show the narrow minded responses of those who have bought into the whole "thin = healthy and beautiful" myth. She's also drawn realistically, not as a caricature of a human being, as fat people often are. 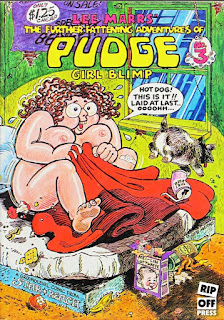 The other underground character that comes to mind is Lee Mars' Pudge, Girl Blimp.  This story of a teenage runaway who lands in early 1970s San Francisco deals directly with the fat question- sort of. Mars' contention is that fat people are really Martians who are distorted in appearance by Earth's atmosphere, which is also why we feel constantly alienated! Unlike the mainstream characters, Mars' characters are all sympathetic and empathetic, even adversaries to our heroine. And the cat is a delight too.
There was supposed to be a TPB collection of this delightful series a few years ago, but I can't find it anywhere. Any help on the matter is welcome.

There are some characters in Bitch Planet who manage to bypass the whole "fat = self-shaming" thing too. Not going to elaborate at this point, but it does deserve mention.
However, in contrast to Thin, another recent book saves the day.
I'm talking, of course, about Faith.
Many folks have recognized this book as the breakthrough that it is. In short, it's a fat girl who's happy with her life, has a good social life, a good (if tentative, but hey, in the economy of the last 20 years, what isn't?) job, and happens to be a super-heroine named Zephyr. 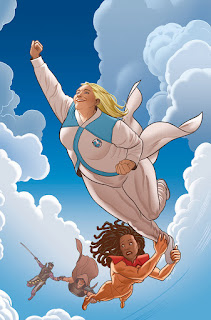 I'll comment more on the Faith book itself when I do my Best Comics of 2016- not sure yet where it will place, but it definitely makes the list.
This is going to come across as "there's no pleasing that girl", but sometimes I think Zephyr/Faith's world is a little too good. I mean, if thin people don't get perfect lives in the comics, why should we? It's a very chipper little book, and I do like the optimism. I just hope for balance. Even in light of that, the idea that fat people deserve every kind of love and a full, happy life is revolutionary in contemporary comics, and a step in the right direction.
If this keeps up, maybe someone will see me again one of these days!