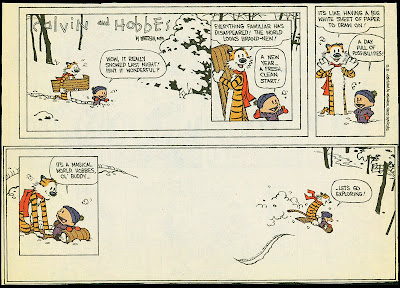 I need to nest an image for use in my parting post to my Graphic Novel course, which ends on Tuesday (sob!).
Therefore, I am adding this classic strip, the last Calvin & Hobbes, to my blog, just so it has a URL.
Besides, it's such a great philosophy!
on May 10, 2009 No comments: 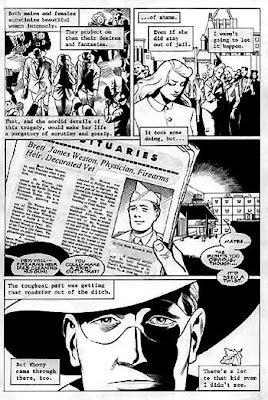 I just finished watching The Spirit courtesy of Netflix.
I'm trying to work up the vitriol to be disappointed.
Oh, I was told what to expect. But this was so much worse. A mish-mash of styles, dialogue that suits none of the characters, a plot so full of holes you could fill Wildwood Cemetery with them, and visuals that lack energy.
Oh, people have commented at length about how visually striking this film is, but it doesn't work for me. It's just a sorry pastiche of Kill Bill and Sin City.
Miller was once capable of great innovation. Now he's a parody of himself, creating implausible cities in which all the women are gorgeous in a sleazy way, all the men are gruff and nobody seems to actually like each other very much. The whole thing was a bizarre nightmare vision of Sin City recast as a camp 60s TV show.
Lest you think me an uninformed grouch, unaware of the nuances of Noir, I would point you to this article.
Eisner deserves better, especially from a freind, and he and Miller were friends.
The Spirit is a pragmatic man involved in Capra-esque morality plays. while these times may seem at odds with such an outlook and such a hero (decades ago, James Garner seemed to me to be an ideal choice to play the Spirit), I suspect that the moral compass of the country is swinging to a sort of pragmatic optimism. The Spirit would fit right in, given the chance.
This page from a Paul Chadwick Spirit story shows that it's possible to be realistic and still maintain a character's inherent humanity and decency, traits that seem to have eluded Miller in this outing.
It's just a darn shame that Frank Miller let his ego interfere with his reverence for the character.
Miller's failure to create a substantial work out of an iconic comic character will in no way help public perception of comics as worthy.
on May 10, 2009 No comments: