"The Congressman from Georgia has the word ballon..."

It's been announced at The Beat and at Bleeding Cool (see links on left) that GA Representative John Lewis will be writing a graphic novel for Top Shelf.
Top Shelf has done some innovative work, including a handsome edition of Moore and Campbell's FROM HELL, Jeff Lemire's pre-Sweet Tooth work Essex County, the continually fascinating and frustrating League of Extraordinary Gentlemen series from Masters Moore and O'Neill, and the popular (with everybody but me) Blankets by Craig Thompson.

A couple things need to be noted.
First, no artist has been named at this point.
Second, this book is based on Lewis' experiences during the 1960s Civil Rights Movement.
To quote an article in the Tuscon Citizen, reprinted in USA Today:
"As a young man, Lewis was beaten in Selma, Ala., on the day in 1965 that has become known as Bloody Sunday. Marchers were on their way from Selma to Montgomery when Lewis and others were beaten by Alabama state troopers on the Edmund Pettus bridge."

That's Lewis on the left, next to Dr. King.
Sounds like a promising project, and I'm eager to read it, but all accounts imply that Lewis and his co-writer, Congressional staffer Andrew Aydin, are doing a factual account of events. Shouldn't this then be categorized as "graphic memoir" a la Fun Home or released without categorization, like Harvey Pekar's underrated and revolutionary Macedonia?
Perhaps it should just be called a "graphic history" like Harvey's history of The Beats.
Does it matter?
For the umpteenth time, yes. If the diverse potential of the form is to be recognized, it cannot be seen as just one thing. That would be akin to referring to all long-form narratives as novels, rather than recognizing their variations as epic poetry, screenplays, or religious texts like the Gita or the Bible.
Beyond that, there's the issue of veracity. Howard Cruse was taken to task, rather unfairly, I thought, by comic creator Ho Che Anderson for Cruse's memories of the times around the Civil Rights Movement in Stuck Rubber Baby. So questions of fiction/nonfiction/metafiction are concerns here as well.
Finally, the news accounts are sort of true.
This is the first time a Congressman has authored a graphic novel. But he's not the first Congressman who worked in the comics form!
That distinction goes to John Miller Baer, whose comics first ran in the Non-partisan Leader in 1916.

He served one term as a US Representative from North Dakota. He was not re-elected, and returned to his first loves, journalism and political cartooning. His cartoons were primarily concerned with farmers' rights and the evolution of granges.
His work was stylistically typical of the period, heavy on detail and tentative in its handling of text.
Thematically, his message was a departure from the more well-known political cartoonists that preceded him. Winsor McCay, for example, though a humanist, was very much in keeping with some of the more stringent political views of his employer, William Randolph Hearst. McCay's views on social problems manifest in many of his own works, notably the film Sinking of the Lusitania. 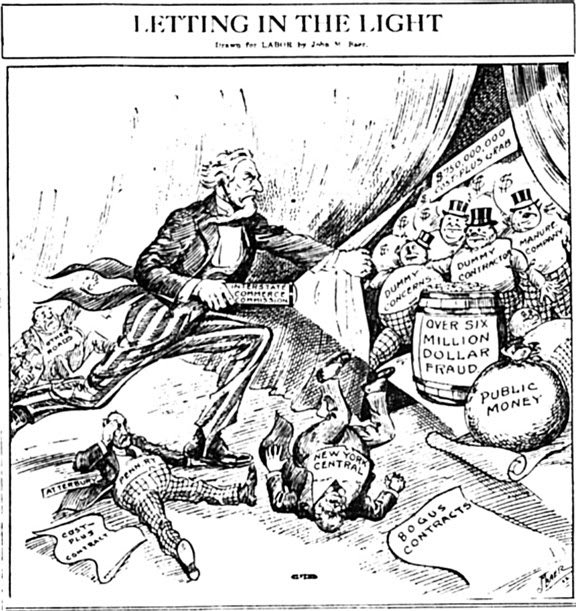 So carry on, Representative Lewis! You are following a proud tradition, whether you know it or not!
I love telling my Comics History students about Baer. Thanks to the innovative efforts of Rep. Lewis, who is scheduled to receive the Congressional Medal of Freedom, the nation's highest civilian honor, later this month, I have a window to share Baer's achievement here as well.
Left: one of Baer's cartoons, for your, ahem, scholarly review.
Below:
Cartoonist (and Congressman) Baer.