James Sturm is a national treasure.
His work is tinged with emotion and possibility, yet mired in tragedy. All done so subtly that you're just sucked in before you know what happened to you.
Sturm has given us such classics as The Golem's Mighty Swing. This year's offering is the deceptively slim volume Market Day. In this less than a hundred page story about a rug maker, Sturm has encapsulated the nature of creativity and the tragedy of being a truly creative human being in a less than appreciative, which is to say, sometimes indifferent bordering on hostile,  marketplace.

Published by the always brave and innovative Drawn & Quarterly, who also publish Lynda Barry and countless other comics luminaries, this is a story that asks a simple question. What's to become of a creator when the market for his creations dries up?
The others who take their work to market on the appointed day may take pride in their craft, but not like our hero. He wants people to buy his rugs, and he wants the rugs to enrich their lives.
He is so eager for the market, the exchange of ideas, goods and possibilities! 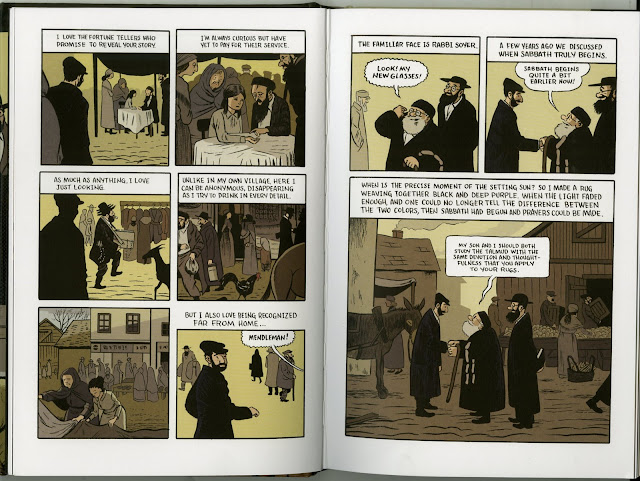 He sees possibilities for new rug designs in everything. 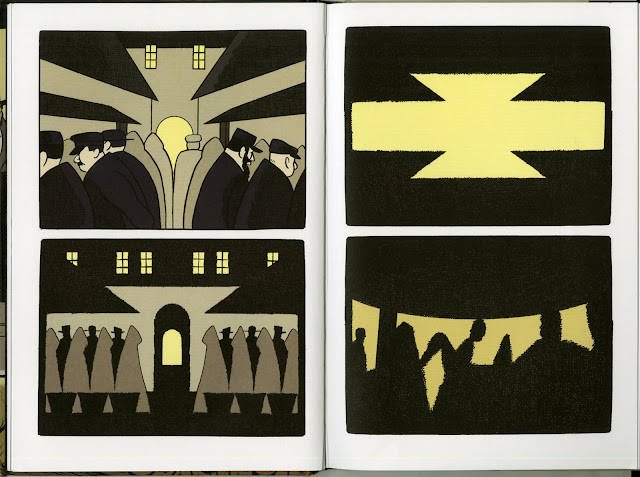 In short, his work and commerce keep him alive in every sense.
However, when he discovers that his primary buyer has retired, he no longer has a place to sell his rugs. With a pregnant wife due any day, he must find another buyer for his rugs, quickly.
He is forced to question his decisions. Has he indulged in a foolishness? The rugs he wove have served every aspect of him, and sustained him and his wife. Until now. 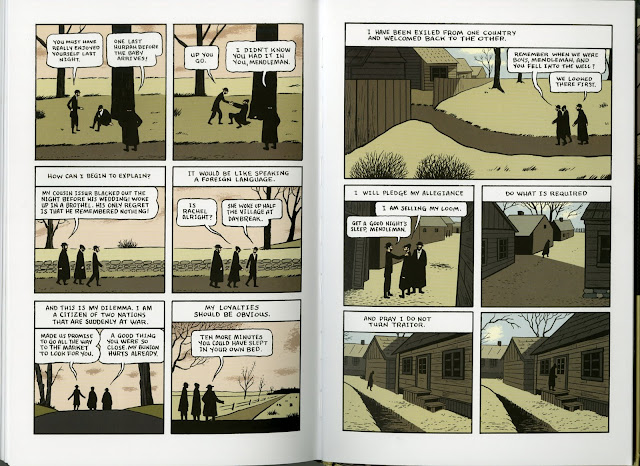 This is a labor of love.
Market Day is dedicated in part to MCAD compatriot Michelle Ollie, who ventured across country to begin the Center for Cartoon Studies, working in tandem with Sturm.
Sturm's art is like his writing: simple, direct and on point, leaving the reader with a larger sense than before the work's consumption.His tightly controlled palette and deceptively plain shapes work to advance the story and its attendant themes much more succinctly than many of the over-embellished flavor of the month superhero artists.
Read this if the issues around a creative person surviving in the world are of the slightest interest to you. Heck, read it anyway. If those issues don't matter to you, Market Day will give you a glimmer as to why they should.
Tomorrow: Best of No. 3, part 2, as we cross a different rainbow!
on January 13, 2011 No comments: