Hi folks;
A week off my game, but never mind. I've had this piece stewing on the back burner for a couple months now. After numerous false starts, here we go. Now it can be told.
I am compiling all the Tranny Towers material. I am planning a Kickstarter. The Complete Tranny Towers. The Tranny Towers Omnibus. Or maybe, as it says on the mockup for the Kickstarter campaign page, just Tranny Towers Complete. I will post notice here when the Kickstarter goes live.
While preparing for this, I realized there were problems with the previous cover. It was drawn for a comic collection in black & white, and while the color added later was successful for the most part, the textures I added were awful. Also, the idea of Athena imagining herself and her trans family as sophisticates while they all have pizza and watch movies on TV was too clever by half. It just didn't translate from the image.
I played with ideas for a new cover for some time. Nothing gelled. In frustration, I thought, "how hard can it be to get the band back together?"
There it was.
I began playing with ideas. Since the strip was from the 90s, I went to girl bands I was listening to at that time. Our ladies as The Runaways. Our ladies as Bonnie Raitt and her backing band. Our ladies as the Bangles. That one was pretty close. I toyed with images based on the All Over the Place (still my favorite Bangles album- so raw!) era shots of the Bangles lounging on a couch. Still not quite right.
Once again, Archie saved the day. I found an alternative cover for The Archies no. 1. It was perfect. I lifted the poses and the setting. I haven't added color yet, but when I do, it will be faithful to the original cover, but with the right skin tones for my girls. I had reservations about using Archie comics as reference again. However, in my search for inspiration, I looked at The Art of Jaime Hernandez. Hey, if Love and Rockets pays homage to, and swipes from, Archie, why the heck shouldn't I?
Here it is. 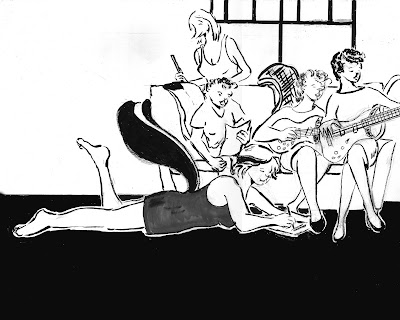 In case people have forgotten who's who, here's a rundown. Relaxing on the floor, writing sheet music: Athena Hunter, MtF post-op trans woman, bi. Behind the couch, drumsticks in hand: Trina, cis lesbian, and partner of Sonia Kertzer, seated on couch with sheet music in hand. Next to her: Dena Statsin, lead guitar, pre-op MtF trans woman, straight. Seated at the end on bass: Dijan LaSalle, cis drag performer, gay male.
No, they're not a band in the original strip. I am going to do a short story in which they become a band for a brief shining moment, both to rationalize the cover and because it sounds like a fun story.
The collection should be about 100 -120 pages, when all is said and done. It will also include related stories from my other work, including the original Ink Tantrums book, attempts at a graphic novels using the characters, and editorial cartoons I did for TransSisters and TNT News magazines.
I'll also be doing paper dolls of each of the five protagonists, and a new story to give a sense of how everyone ended up. It is a soap opera, after all, and my readers never really got closure.
In case you've forgotten, this is the old cover, which was used in black & white as part of a Xeric Grant proposal so many years ago. 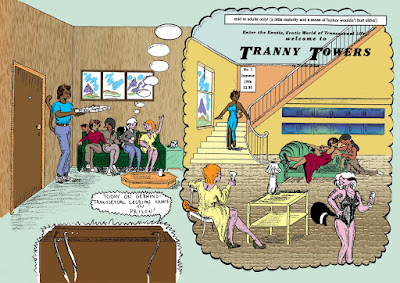 There are practical considerations to the new cover. The proportions of the cover may be a tad off. This is intended to serve as a wraparound cover. Ideally, the spine will fall near the edge of the couch. It will be easy enough to extend the right edge with large flat blocks of color to make this happen, if need be. Also, the large black area on the floor can easily be cropped or extended if necessary. Bear in mind that at this stage, we don't know how thick the spine will be! There's also ample air for copy placement on the back cover, and on the front cover near those windows and in the aforementioned black area of the floor.
In short, the piece is designed so I can play with it until it's technically right, if it's not already so.
Materials used:
Canson Recycled Bristol board
Straightedge, triangle and T-square
No. 2B and no. 4B solid graphite sticks
Lead holder and No. 4 lead
Magic Rub eraser
Dr. Martin's Black Star High Carbon Walnut Ink, which I continue to love
3/4" Princeton synthetic brush, flat
No. 4 Escoda Reserva Kolinksy Tamyr brush, flat
No. 4 Princeton Synthetic brush, round
Faber Castell brush tip marker, 80% gray
Crow quill and nib
Tight Spot angled correction brush
FW Acrylic White
I am enjoying the No. 4 brushes a lot.
I have some reservations about starting a  new project before completing Sharp Invitations. But as I've confided privately to several friends, I relive my pains and stupidities (along with the joys) when doing that work, and it's emotionally draining. It's vital, and I'll keep doing it, but sometimes I need a hiatus. This is a project I can complete in fairly quick order (though I suspect fulfillment will be a nightmare). Also, it's pure joy. I had forgotten how much fun I have drawing the Tranny Towers characters!
Next: back to Sharp Invitations, either the Curt story or a long-promised single page story.