For those who don't recall, Crossgen was a comic publisher with lofty ambitions. They put out a quality product, paid their creators well and gave them benefits (!), and were quite professional in everything except their ambitions.
Recently, Marvel began publishing new material with some of the Crossgen characters. I was delighted to see that Ruse was among those properties.
The original story was a Sherlock Holmes pastiche with a couple novel twists. First, the aide de camp, the Watson character, was a woman, Emma Bishop. Second, she had magic powers that were kept hidden from the Holmes stand-in, Simon Archard.
However, at the end of the Crossgen series, Emma used her powers, losing them in the process. This subtly altered the dynamic, which previously focused on Emma's capacity to aid Simon without his knowledge (the stories are told in Emma's POV). This was deftly done by writer Mark Waid, who managed to avoid having Archard appear the fool in the process.
In the new incarnation, Emma is still invaluable, but must spend a considerable portion of the story trying to get Archard to acknowledge her as an equal. 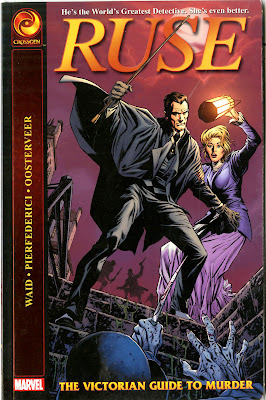 The art in the original run was by Butch Guice, whose work doesn't always trip my trigger but was quite elegant on this title.  Guice and Waid managed to meld seamlessly in this book, with his Victorian touches coming across as accurate but not forced.
I'm not as wild about the new artist on the series, one Mirco Pierfederici. His work seems much cruder by comparison. It still works, just not as well. However, in fairness, it did grow on me by the end of this brief mini-series.
I picked up two of the single issues, then in frustration, decided to wait for the trade. Marvel's slavish loyalty to their blighted policy of running an ad every other page is not going to do wonders for their floppy sales, whatever's left of those sales. As this was a mini, I also didn't take exception to the equally grating Marvel policy of putting out wafer-thin collections.
The storyline itself involves deathtraps, a layered blackmail plot, and an old nemesis. I'm reluctant to say too much in case one has yet to read it.
There's a dashing element to these stories, and I do really like them if they're well-handled. In a recent post at The Beat, Kate Fitzsimons called Ruse "the most truly Holmesian of all the Holmes comics listed." 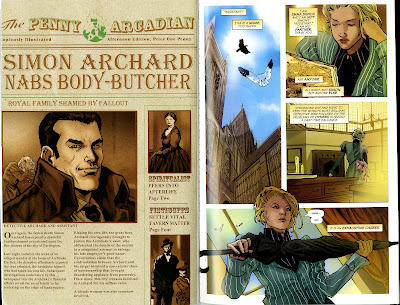 Every issue, or chapter if you will, leads with a page of The Penny Arcadian. I love these little touches. Great device for verisimilitude, and advances and recaps the story nicely. And these are not so labyrinthine as those in the 2003 - 2010 series Rex Mundi, which used pages and pages of faux newspapers to fill in all manner of information about the story's world. Fascinating, but draining. Much more effective here!
This Ruse story is much more action driven than its predecessor, which was also pretty action-heavy. 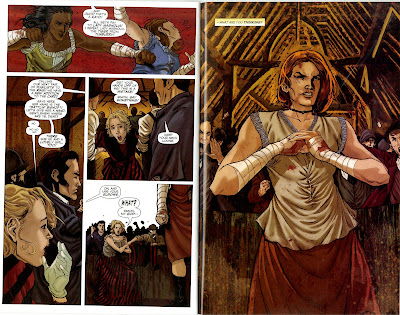 In summary, this is not as strong as the original run of the title,which is on my short list for becoming a custom bound volume this year. But it's still highly engaging and very challenging, and well worth your time.
Next: Number 6: oh, baby!
on January 18, 2012 No comments: