As I was reviewing this list, I realized that there were a few really important books I'd omitted.
Since these things are arbitrary anyway, I decided that a couple of these spots would be a tie.
So today's Best of 2010,  No. 8, Part One is Mr. Mendoza's Paintbrush!
Written by award-winning author and poet Luis Alberto Urrea, this slim graphic novel does not take full advantage of the form, but tells a story that is quiet, energetic and magical.

Mr. Mendoza is the senior citizen of the village. He is also its resident tag artist, and is respected as such by most of the locals. His tags are biting social satire on the locals, and he spares no one his  brush's venom.
The story is related to the readers by two young boys that are rapturously observing Mr. Mendoza's  efforts as they discover the possibilities of life.
Luis Urrea is the author of The Hummingbird's Daughter, Into the Beautiful North (the one I'm currently reading), and The Devil's Highway.
I first became aware of Sr. Urrea's work through my man Shawn Phillips. Here's Shawn's song based on the latter Urrea book.
This performance is from St. Cloud, MN, July 30, 2009.

Wow.
Shawn also played guitar on the audio book version of The Hummingbird's Daughter, which I have yet to add to my Shawn archive.
The deep color scratchboard art of Christopher Cardinale works fluidly with the text.
In the last few days, I've talked a bit about the possibilities of comics working as an adaptation medium.  I have more of a caution about people who are versed in other disciplines trying their hand at comics. Some of these, like the comics work of rock musician Dave Stevens or that of actor Nicholas Cage, are well-intentioned but mediocre in their execution.
In this case, Urrea has embraced the possibilities of the form, albeit a mite tentatively. There's an excessive reliance on large panels, but the text and the image support one another with minimal redundancy.
It's clear that Sr. Urrea has approached the form and the narrative respectfully.
The climactic event of the book involves Mr. Mendoza announcing at the local watering hole that he will be leaving the next day. 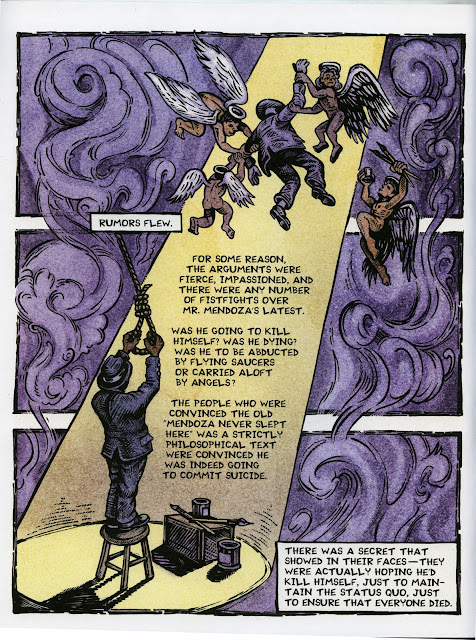 The flow of the page through the beam of light, the cascading purple swirls and the vaguely neotenic angels create an effective layout, one that's moving in every sense.
So does Mr. Mendoza die the next day?
I'm not saying, other than to say that it's his final great work of art.
In that sense, this is also a bit reflexive, in that it's art about art.
But at the risk of seeming facetious, isn't it all?
Urrea's observation that "home isn't just a place. It's also a language" is reinforced by the first page of this slim graphic narrative. 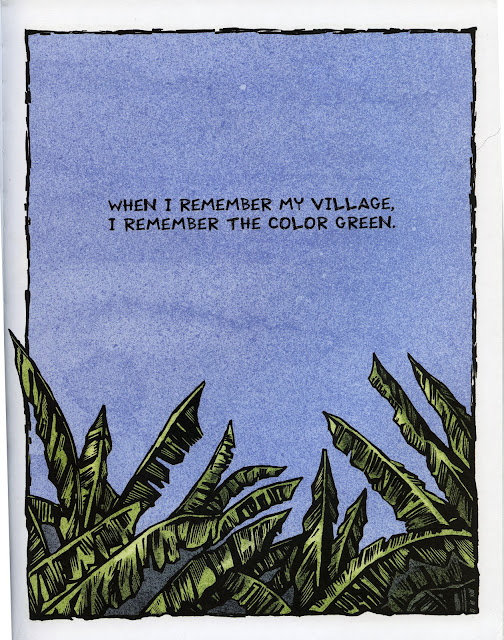